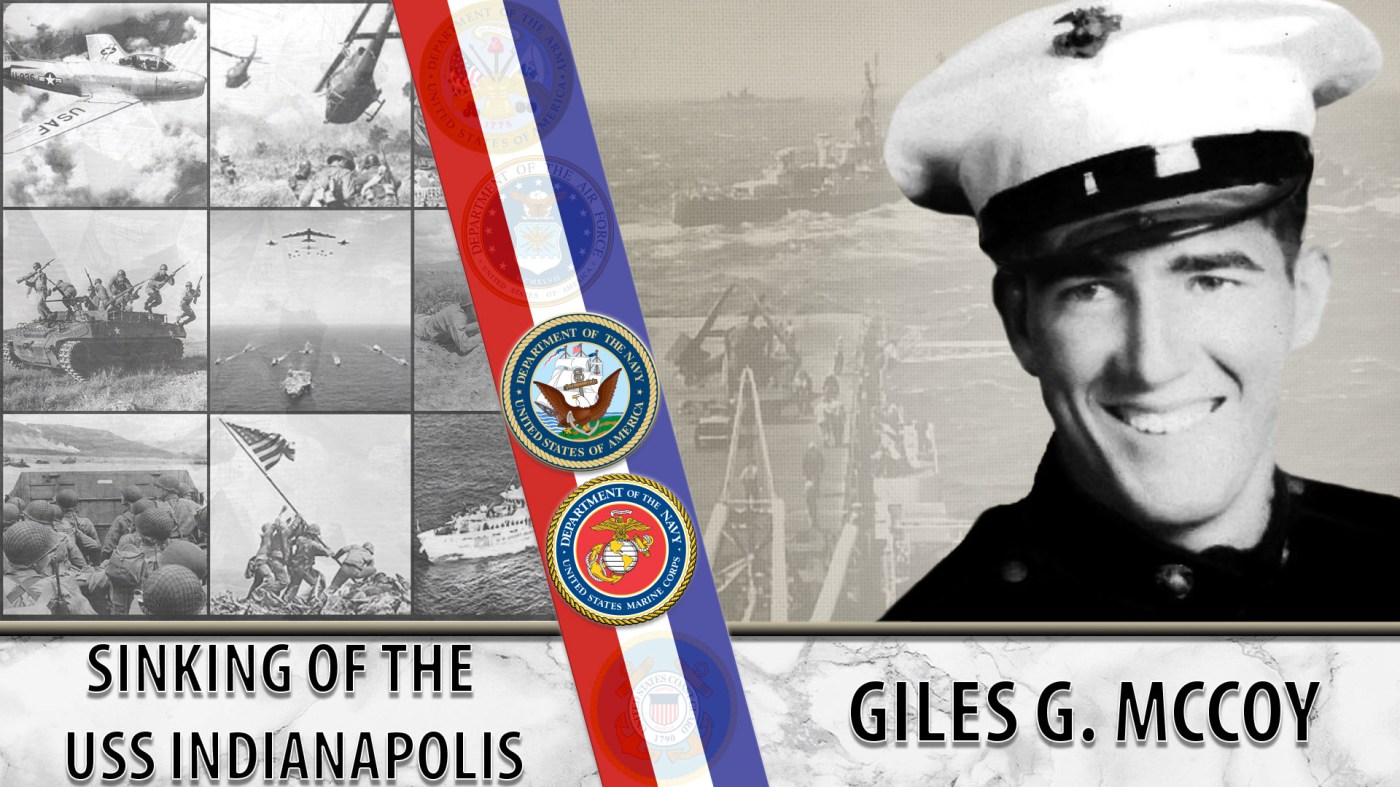 Marine Corps Private Giles McCoy survived for nearly four days after he sinking of the USS Indianapolis in the shark-infested Philippine Sea.

One of the crewmembers aboard the USS Indianapolis was Marine Corps Private First-Class Giles G. McCoy. Having been shot during the Battle of Peleliu while serving as a sniper with the 7th Marine Regiment, 1st Marine Division, Giles had been assigned to the USS Indianapolis as a light assignment in recognition of his courage during the battle. While aboard, Giles was primarily responsible for keeping the deck clear of spent cartridges from the five-inch guns.

After successfully delivering the atomic bomb components to Tinian Island in July 1945, the USS Indianapolis made a short stop at Guam. There, it droped off sailors who had completed their tours, then made its way towards Leyte, where its crew was to undergo training. On July 30, 1945, at 12:15 a.m., while en-route to Leyte, the USS Indianapolis was engaged by Japanese submarine I-58 and struck by two torpedoes.

At the time of the attack, Giles was stationed three levels below deck, guarding two court-marshaled crewmen. The first torpedo struck near the Marine compartment, killing all men inside. Soon after, the second torpedo hit, igniting the eight-inch magazine compartment, throwing Giles to the side of the ship and burying him under a pile of bunks.

After climbing his way out in complete darkness, Giles managed to find a lantern, and with the assistance of the court-marshaled men, began assisting wounded men out of the rubble to the top deck. As the ship began rapidly taking on water, Giles and his fellow crewmen were ordered to stop rescuing the wounded so the compartment could be sealed.  Despite their protests, the men were forced to leave the wounded behind and the compartment was sealed.

Upon reaching the top deck, Giles managed to grab a life vest. As he walked towards the bow of the ship, he could see it was already under water. With the ship already half submerged, Giles slipped into the sea and began to swim away.

Giles was then sucked underwater by the negative current caused by the now rapidly sinking ship. As he was dragged farther and farther under, the pressure began to build until he felt as if his head would blow. Suddenly, a pocket of air pulled him back to the surface, saving him from death. Looking back, Giles saw nothing but a patch of foam where the ship had sunk. As he struggled to get his life jacket on, Giles felt the concussions hit his legs as the ship’s fuel and ammo exploded under water.

After floating for some time, Giles came across another group of men who had managed to climb aboard a large piece of broken life raft. Once he was pulled aboard, Giles began vomiting the leaked fuel he had swallowed while swimming. Assuming the Navy was aware the ship had been sunk, the men felt confident they would be rescued the next day. Unknown to them, the Navy was not yet aware the USS Indianapolis had sunk.

In addition to being exhausted and injured, the men had sunk in the shark infested waters of the Philippine Sea. With no bottom to their life raft, the men were forced to float with their bodies partially submerged in the water. There, they attracted the attention of hungry sharks, which began to strike at the men. Despite their efforts to fight back, several survivors aboard Giles’ raft were killed in shark attacks before help could arrive.

On August 2, three and a half days after the USS Indianapolis had sunk, Navy pilot Wilbur “Chuck” Gwinn was patrolling the sea for Japanese submarines in his PV-1 Ventura bomber when he spotted what he believed to be an enemy submarine. As he flew down to engage the target, Chuck realized he had not spotted an enemy sub. It was Giles and his fellow survivors. Due to a series of tragic mistakes, it was not until Chuck spotted the men three and a half days later that the Navy became aware of the sinking and launched a rescue operation.

While at sea, Giles promised to God that if he was saved, he would dedicate his life to helping others. After recovering in Guam and returning to the United States, Giles kept his promise. He earned an undergraduate degree from the University of Missouri at Columbia and a doctorate in medicine from Logan College of Chiropractic. In addition, Giles recorded his experiences throughout World War II in the book, Forever a Soldier.

We honor your service, Giles.