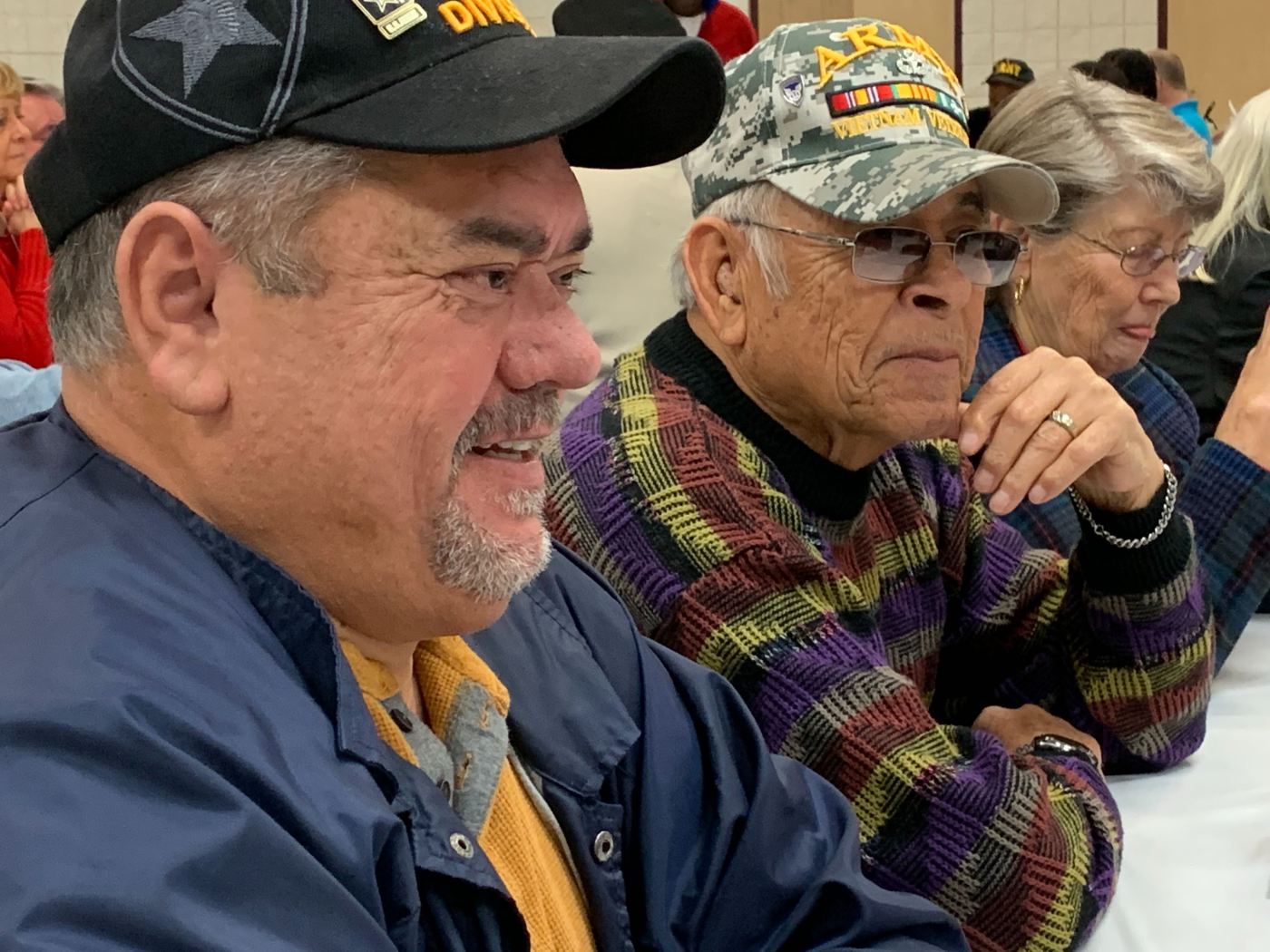 At rows of tables in a packed community center, nearly five dozen Veterans smiled and swapped stories over a potluck meal. The Veterans spanned generations, from Vietnam, Cold War, Desert Storm, Iraq and Afghanistan. Donning Veteran ball caps and jackets with their spouses nearby, the group swelled to about 100.

After the meal, hands shot up during a drawing. Shouts of “BINGO!” during the raffle brought laughs from the crowd. As Veterans heard their winning ticket called, Fayetteville Vet Center staff brought prizes to smiling Veterans. After the raffle, there were pats on the back and talking with old friends and meeting new ones. Two Veterans donning Marine Corps hats came together to talk for the first time, asking the other what unit the Marine served in.

Congress established Vet Centers in 1979 because a significant number of Vietnam combat and era Veterans were not accessing VA services at the same levels as Korean and World War II Veterans. Over the past 40 years, Veterans have used Vet Centers as a place for assistance as well as camaraderie.

Vet Centers are community-based counseling centers. They provide a wide range of social and psychological services, including professional readjustment counseling. Eligible Veterans, active duty service members, including National Guard and Reserve components, and their families can use the services.

Vet Center staff offers readjustment counseling to make a successful transition from military to civilian life or after a traumatic event experienced in the military. Staff offer individual, group, marriage and family counseling in addition to referral and connection to other VA or community benefits and services.

Vet Center counselors and outreach staff are many times Veterans themselves. Experienced staff can discuss the tragedies of war, loss, grief and transition after trauma.

One of the main benefits at Vet Centers is confidential readjustment counseling services. Clients can receive confidential readjustment counseling services at 300 Vet Centers, 80 mobile Vet Centers, numerous outstations and community access points as well as 24/7 through the Vet Center Call Center. More than 2,000 staff are ready to assist eligible Veterans, active duty service members and their families with a wide range of services, ranging from socioeconomic concerns to dealing with the trauma associated with war, sexual assault and psychological injury.

Veterans talk at the Christmas luncheon put on by the Fayetteville Vet Center Dec. 13, 2019.

Howard Cunningham is one of those Veterans the Vet Center serves. Cunningham served in Vietnam from 1965-1968 and 1969-1972 with the 101st Airborne Division. He saw numerous fatalities during four and a half years of combat. Cunningham came in at the urging of a friend.

“I didn’t think there was anything wrong,” Cunningham said. “Then I saw my first counselor. I began to see what everyone else saw.”

“I can deal with the rest of the week,” he said. “I’m with people who have gone through the same thing.”

Veterans often feel this sense of camaraderie, said Amy Meek, a readjustment counselor at Fayetteville. Meek, who’s been at the Vet Center for over 12 years, said Veterans continue to go so long because they develop strong relationships and the groups become like a family.

One Vietnam Veteran came up to Clark unsolicited. He told the story of the first time he came into the Fayetteville Vet Center.

Following a self-described “bad day,” the Veteran disappeared. His wife, worried the Veteran may harm himself, started making frantic calls. The Veteran walked into the Fayetteville Vet Center. A counselor stopped him and said he looked like he was having a rough day. The counselor poured two cups of coffee, talking to the Veteran for hours. In summation, the Veteran was point blank in the outcome that day.

“She saved my life.”