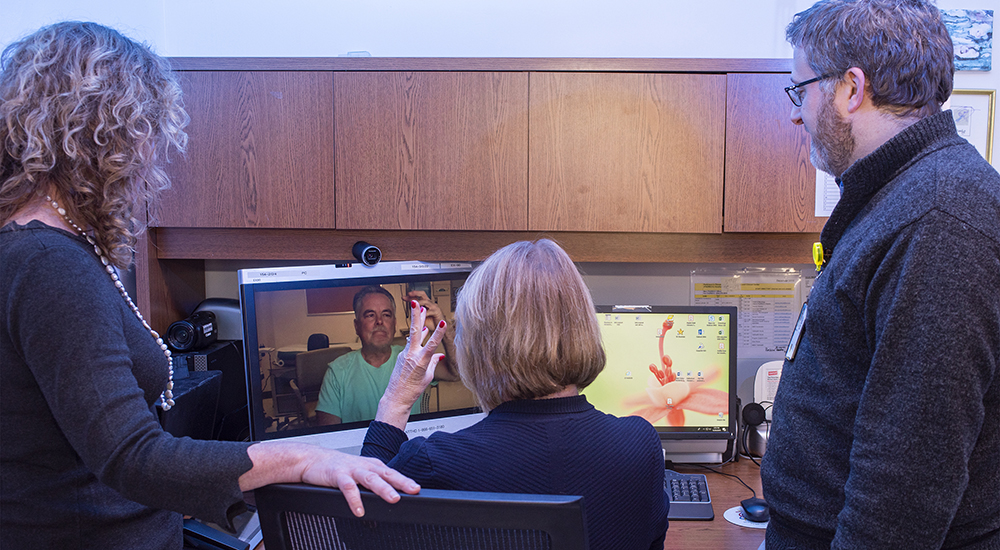 A 56-year-old Army Veteran diagnosed with Parkinson’s Disease (PD) is now thriving thanks to care he received through the Central Virginia VA Health Care System.

Under the initial care of a neurologist at the W.G. (Bill) Hefner VA Medical Center in Salisbury, North Carolina, Jeff Howe had reached the maximum level of medication allowed. This caused him disabling side effects. His doctors there referred him to the Parkinson’s Disease Research Education and Clinical Center (PADRECC) at the Hunter Holmes McGuire VA Medical Center in Richmond, Virginia. There, patients work with an interdisciplinary team who manages their care.

Even though Howe lived 300 miles away, doctors conducted his initial evaluation and follow ups via telehealth. When it became apparent his medication had lost its effectiveness, doctors recommended deep brain stimulation (DBS).

“I used to have to take a nap two to three times a day,” Howe said. “I had a lack of movement. My jaw would lock up, and I had real bad fatigue.”

DBS involves placing a small wire into the brain to deliver a well-controlled electrical current. This functions as an “off switch” for the brain signals that cause abnormal physical movements. This disruption restores more-normal activity in the brain and, when successful, enables more-controlled movement. The device runs on a battery pack inserted into the patient’s upper chest. The effects of DBS are reversible and adjustable.

“It’s not a cure, but it helps,” said Miriam Hirsch, DBS nurse coordinator and clinical research nurse in PADRECC. “People can get their lives back. One of the most statistically significant things people can do that may slow the progression of their disease is to exercise. Parkinson’s Disease can limit a person’s ability to do that effectively.”

In the photo at the top of this blog, Hirsch, Debbie Dellinger and Dr. Paul Koch follow up with Howe through a Telehealth session from Richmond. Dellinger is a nurse practitioner and Koch is an attending neurosurgeon.

Surgery was a success

Howe had lost 23 pounds in eight months due to his condition. Also, his head and body would wiggle and writhe about six hours a day due to dyskinesia, a side effect to some medications. He was in a continuous state of movement and always exhausted.

“My VA neurologist in Salisbury referred me to the best,” Howe said. “I haven’t had one head shake since the surgery.”

Koch performed Howe’s surgery in May 2019. Hirsch says, on average, DBS improves tremors as much as 80% and slowness and stiffness by 40% to 60%.

The PADRECC clinic doesn’t just treat Veterans with Parkinson’s Disease. The team treats Veterans with various movement disorders, such as essential tremor, dystonia, and Parkinson’s, plus disorders like multiple system atrophy. This specialized team consists of neurosurgeons, a nurse practitioner, a nurse coordinator, neurologists, a physiatrist, a neuropsychologist and rehabilitation therapists.

With his new-found freedom of movement, Howe isn’t slowing down.

“Deep brain stimulation made a world of difference to my quality of life,” Howe said. “I feel great now. I’m not able to work again but doing a whole lot better than where I was. Now I’m active most of the day.”

“The entire hospital staff is the best,” Howe said. “Thanks to all for a new beginning.”

Click here for more information about PADRECC services, or call 1-800-784-8381, extension 5931. If you want to improve your quality of life, take charge and visit www.va.gov/wholehealth.

Megan Kon is a public affairs specialist with the Richmond VA Medical Center.