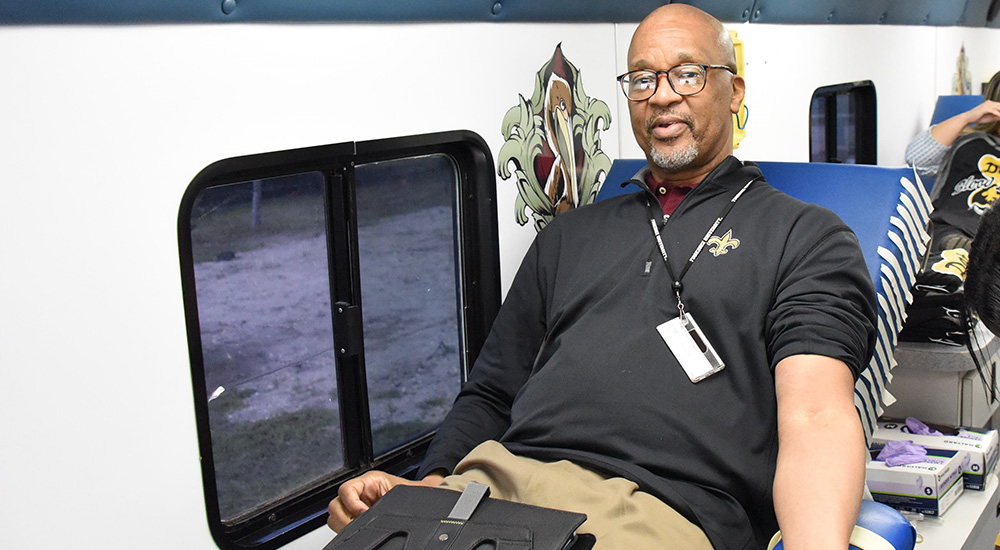 On Jan. 17, the Southeast Louisiana Veterans Health Care System held a blood drive. Army Veteran Anthony Smith was the first person in line at the Bloodmobile, excited about the opportunity to donate. As he waited for the drive to start, he shared a story that made it clear how important it is to give a gift that saves lives every day.

Smith served in the Army from 1975 to 1982, before becoming a police officer. Years later, he retired from the force and started a third career with the Eastern Oklahoma VA Health Care System in Muskogee. Sometime after that, he developed persistent headaches.

“The headaches lasted for months, until one day the room started spinning. The next thing I remember, I was waking up in the hospital after being in a coma.”

Smith had experienced a stroke. The doctors at Muskogee VA found a blood clot in his neck and concluded that Smith needed a blood transfusion to reduce the risk of future clotting.

“It was like my blood had stopped doing the job it was supposed to do. They had to take out some of my blood and put in healthy blood.”

With the help of the team at Eastern Oklahoma VA, Smith underwent about a year of physical therapy and made a full recovery. He now works at the Southeast Louisiana Veterans Health Care System in his hometown of New Orleans as an administrative officer.

Enough compassion to know someone would need help

Smith credits the transfusion with saving his life by preventing another stroke. He’s tremendously grateful to the donors who gave him his second chance.

“It’s humbling because the people who donated didn’t know me. But they had enough compassion to realize that someone out there would need help, and they stepped up to do it.”

Smith wasn’t eligible to give blood immediately after his stroke because he had just received a transfusion. He was given the green light in 2010 and he’s donated three times a year ever since. Those donations alone have possibly saved dozens of lives. But he didn’t stop there.

In the years since his transfusion, Smith has become a champion for blood donation, talking frequently with family and friends about donating blood. He’s even organized blood drives at the church he attends. He educates people who don’t know the facts on blood donation and those who may be hesitant.

“I tell people all the time, if you’re hesitating, think about how many people are out there waiting for a donor. Or think of it this way. I can almost guarantee you that someone in your family needed blood at some point in their life. Look at me; if my donor hadn’t stepped up, I wouldn’t be here. You can do the same thing for someone.”

Smith realizes that not everyone gets a second chance at life. He’s grateful for the gift he received and as long as he’s able, he’ll keep giving back.

Smith’s donation to the Blood Center supports over 30 hospitals in the Gulf South, including the Southeast Louisiana Veterans Health Care System. To learn more about giving blood, go to www.redcross.org/give-blood.

Phil Walls is a Marine Corps Veteran and a public affairs specialist at the Southeast Louisiana Veterans Health Care System.