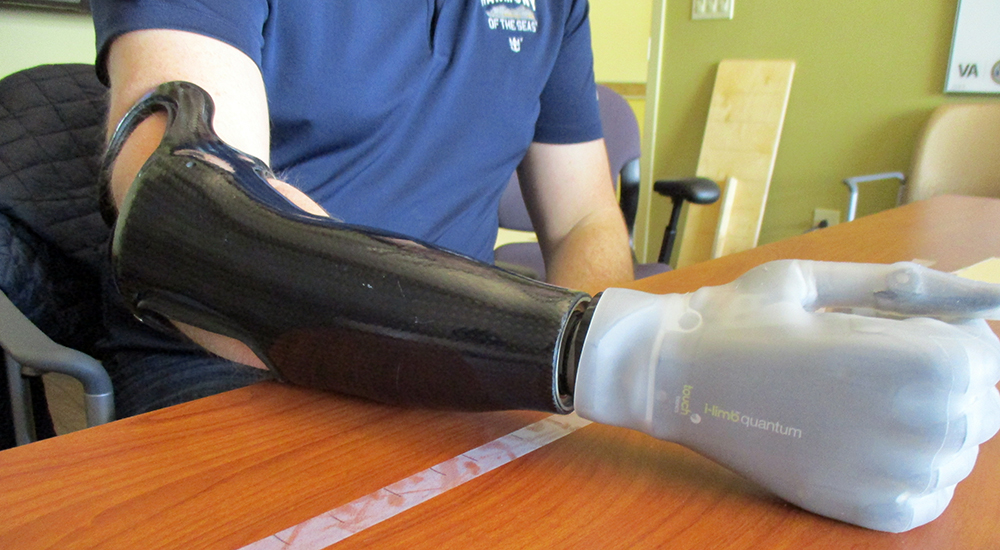 Advanced robotics, bionic limbs, microchips and neural interfaces are some of the more glitzy projects that result from the ingenuity at the VA facility, which is also known as the APT Center.

At the same time, scientists, engineers and clinicians at the APT Center work on technologies that are less “sexy” on the surface, but are just as important as the others. One of the ongoing projects is developing material to better absorb and channel the sweat that can build up inside the socket liner of a prosthesis.

A Veteran amputee discusses his prosthetic socket liner with Courtney Shell, a research associate at the APT Center. (Photo by Jennifer Kerbo)

Excess perspiration can affect the fit of a socket liner — a flexible, cushiony material that fits over the residual limb and reduces movement and chafing between the skin and the socket.

It can contribute to human tissue softening from constant water exposure, as well as infection, discomfort and poor hygiene.

Veterans who use either lower- or upper-limb prosthetic devices, such as the myoelectric arm shown in the photo above, stand to benefit from the Cleveland VA’s work to develop new materials for socket liners. The photo is courtesy of the Providence VAMC.

One of the most important studies

Experts at the APT Center believe managing this issue could revolutionize the clinical implementation of socket liners. They hope the new material will provide a more stable and comfortable separation between the limb and the socket.

“People really enjoy reading about some of the other pieces of work that we do,” says Dr. Paul Marasco. Marasco is a neuroscientist and the principal investigator at the APT Center. He is leading a developmental study on the new socket liner material. “This is probably one of the most important studies that I’m doing because it addresses a really critical problem with amputees and the VA population.”

A study participant with an above-elbow amputation prepares to don her prosthetic arm. A smooth, pliable silicone liner covers her residual limb. The liner avoids irritation from the hard socket that connects the prosthetic arm to her body. (Photo by Courtney Shell/APT Center)

The project is a collaborative effort involving the APT Center, the Cleveland VA prosthetics clinic and colleagues at the University of Chicago and Case Western Reserve University. To get the initiative off the ground, the APT Center funded the early prototype development of the socket liner through its Steven Garverick Innovation Incentive Program.

New technology applicable to all types of amputees

Conventional silicone socket liners have advanced relatively little over the years. They have a troubling tendency to accumulate sweat during use, especially for physically active amputees. Veterans have become more active in recent years due to advancements in prostheses technology. This leads to a greater accumulation of perspiration. Heat and humidity can also increase moisture levels.

The new APT technology is applicable to all types of amputees — single, double and triple. Still, Marasco believes it can best help double and triple. He explains that single amputees can compensate for less-than-ideal socket conditions and fit, for example, by placing more weight on their sound side. This reduces the amount of pressure or sweat that accumulates in the prosthetic socket liner.

But such compensation, Marasco notes, can lead to serious back, joint and limb problems. “That’s going to cost severely 10, 15, 20 years down the road,” he says. “With multiple amputees, the difficulties with socket fit are salient and clear right off the bat. These amputees don’t have a sound other-side limb to compensate for the poor socket fit, so they’re stuck.”

When discussing prosthetic socket moisture distribution in relation to Veterans, the focus is mostly on lower-limb amputees. Nearly all the amputees who receive care at the Cleveland VA prosthetics clinic receive with lower-limb prostheses, Marasco says. Diabetes is the leading cause of lower-limb amputation in the Veteran population.

“Improving water management in this critical component will fundamentally improve the standard of care for a large population of upper- and lower-limb amputees,” Marasco and his team write. “A liner material, which keeps this moisture away from the amputee’s skin, would improve comfort and hygiene, but also the critically important fit and thus the overall performance of the prosthesis.”