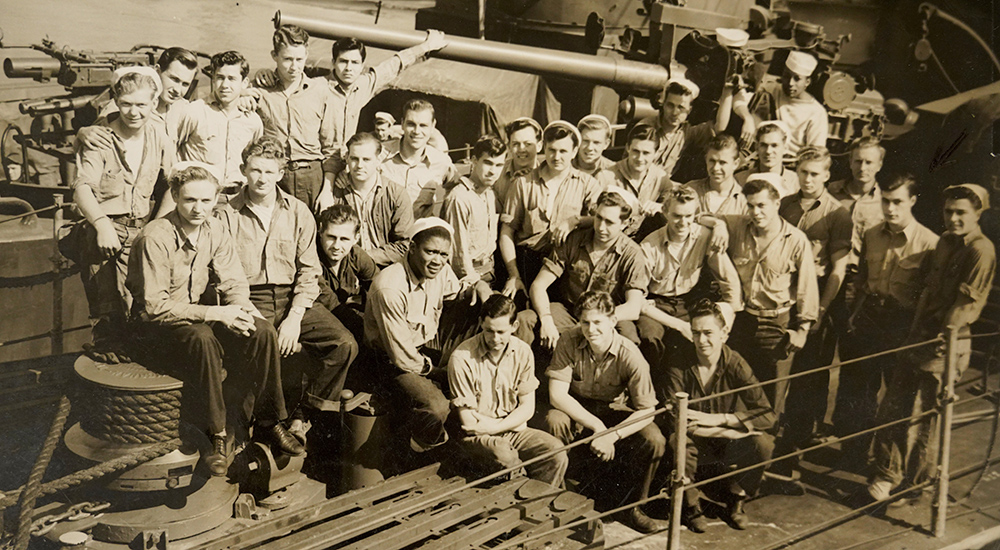 On Sept. 2, 1945, Carl Niewoehner from Kirkwood, Missouri, was serving onboard a Navy patrol craft when he heard the news. A radioman entered the ship’s wardroom where he and his fellow officers were having dinner and told them the war was over.

“He picked it up on Armed Forces Radio, which is how we got a lot of our information,” Niewoehner said. “Some people cheered. Some cried. I had mixed feelings. It was strange because you’re under a lot of pressure. You don’t know what’s going to happen the next minute. It had been that way ― well, in my case ― for a year and a half. So, you get a little edgy. But eventually, we all were able to let loose.”

The photo above shows some of the crew aboard Niewoehner’s PC-816 during World War II.

Wednesday, Sept. 2, marks the 75th anniversary of the end of World War II, a global conflict responsible for the deaths of an estimated 70 to 85 million people. Niewoehner’s generation had come of age during the great depression. After Pearl Harbor, they would have to shoulder the burden of what President Franklin Roosevelt called the “righteous might” of the American people to secure “absolute victory.”

“On Dec. 7, 1941, I came home from a fishing trip on the Meramec River,” Niewoehner said. “My dad turned on the radio and that’s when we heard about the Japanese bombing Pearl Harbor. And the first question was, ‘Where’s Pearl Harbor?’ Because I’d never heard of it before.”

The next afternoon, Roosevelt delivered a six-minute address to a joint session of the U.S. Congress. Within an hour, war against Japan was declared.

“At one point, five or six of us from high school went down to the federal building in St. Louis to enlist in the Marine Corps,” Niewoehner said. “But my mother wouldn’t sign the papers because I was only 17. Some of those that ended up going didn’t fare too well. I was disappointed at the time, but looking at things now, I was very fortunate.”

An 18-year-old Niewoehner joined the Navy shortly before graduating from high school and was called to active duty on July 1, 1943.

“In those days, they were looking for people to man airplanes and ships,” Niewoehner said. “They were building them faster than they were training people. If you scored high enough on a certain test, you were fast-tracked. I did well, so they sent me to midshipman school at Columbia University where I was commissioned at the age of 19.”

Carl Niewoehner, 95, continues to serve as a volunteer at Truman VA.

Newly commissioned Ensign Niewoehner soon joined the crew of USS PC-816 off the coast of California. The 173-foot long, 23-foot wide vessel, known as a “sub chaser,” was small but fast. Their mission was to escort larger ships and patrol for Japanese submarines that sometimes prowled off the West Coast. As a combatant ship, it was armed with depth charges, as well as antiaircraft and machine guns.

Niewoehner said you never knew what you might run into during a patrol. For example, over a seven-day period in 1941, nine Japanese submarines attacked eight American merchant ships just off the Pacific Coast, sinking two and damaging two. Around Christmas 1943, a Japanese submarine was sunk by a patrol craft only a mile off San Diego. Mines also were a concern.

San Diego was homeport for carriers

“The Japanese were very interested in San Diego because it was the home port of our carriers,” Niewoehner said. “We escorted some of them, like the USS Bunker Hill and USS Shangri-La. Once they got to within 10 to 12 miles off the coast, they required an escort because they had to slow down, which made them vulnerable.”

“On the West Coast, we covered the area from Dutch Harbor (Alaska) down past the Panama Canal,” Niewoehner said. “On the East Coast, they covered from Nova Scotia past Trinidad (off the coast of Venezuela), which was very critical. Our No. 1 priority was to protect the Panama Canal and the (shipping) lanes of Trinidad. We were getting all our rubber from Trinidad and if they had cut off our rubber supply, that would have been a real problem.”

Niewoehner identifies himself (third from right) in a photo of ship’s officers.

Niewoehner left the Navy in June 1946. He attended the University of Missouri earning a degree in Civil Engineering. He married and after settling in Boone County he and his wife had a child. As a Veteran, he receives his medical care at Harry S. Truman Memorial Veterans’ Hospital in Columbia.

“Don’t know what I’d do without VA health care.”

“I’ll tell you, I’m so proud and so happy to have VA health care,” Niewoehner said. “I just don’t know what I’d do without it.”

When asked what people today should know about the Second World War, the 95-year-old Veteran’s message is straight forward and extremely relevant, especially during a time of global pandemic.

“Everyone sacrificed,” Niewoehner said. “World War II affected everyone. The level of sacrifice that people made during the war is something we as a country haven’t seen since.”

On this historic anniversary, Truman VA recognizes and honors not only those who served during World War II, but all our Veterans. Thank you all for your service to our nation.

Jeff Hoelscher is the public affairs officer at the Harry S. Truman Memorial Veterans’ Hospital. Hoelscher’s great uncle served on the USS Missouri during WWII, and was onboard 75 years ago today, when representatives of the Japanese Imperial forces surrendered, ending the war.