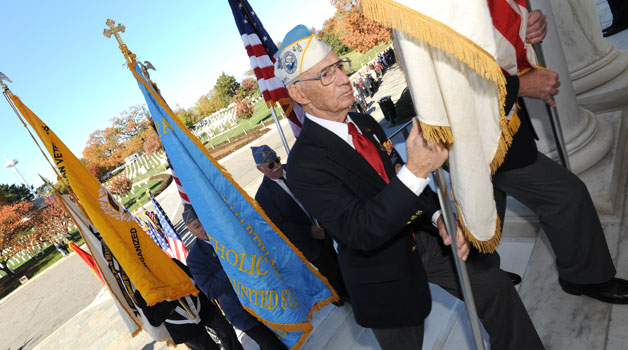 Pearl Harbor Survivor Clarence Davis has carried the flag of the Pearl Harbor Survivors Association into the Memorial Amphitheater at Arlington National Cemetery at the annual Veterans Day program for the last 25 years. He was there on November 11th lined up with the flags of 40 other Veterans organizations waiting for Vice President Biden to take the stage and begin the 2010 program. He was paired with his 63-year-old son Michael carrying the U.S. Flag at his side. Clarence was the oldest flag bearer.

“At 87,” the Navy veteran said, “I’m the youngest member of our Maryland chapter and the only one able to get the flag in and out of the amphitheater.” Davis said he joined the Pearl Harbor Survivors in 1972 and has never missed a chapter meeting. He’s the Association’s Maryland State chairman.

In 1995, there were 300 members in the Maryland Chapter; today there are 42, and as Clarence noted, he is the youngest. Son Michael is a member and state officer in the Sons & Daughters of Pearl Harbor Survivors and helps out now on Veterans Day and in keeping the history, heritage, and eye witness accounts of December 7, 1941, alive.

Clarence Davis puts much time and energy into Pearl Harbor Survivor Association activities. “I always felt the attack was something people should remember,” he said. “It happened so fast and so many died. I always said it could happen again at any time and any place, even in America–and it did!”

This December 7, 2010, on Pearl Harbor Remembrance Day, Clarence, his son, and a small band of Pearl Harbor Survivors and supporters will gather at the Pearl Harbor Survivors Memorial in Annapolis, Md., on the grounds of the State’s World War II Memorial to tell their story and keep the memory of that momentous day alive–an event they remember as if it were yesterday and one that shaped the world we know today.