VA doctor and his family were diagnosed with COVID-19 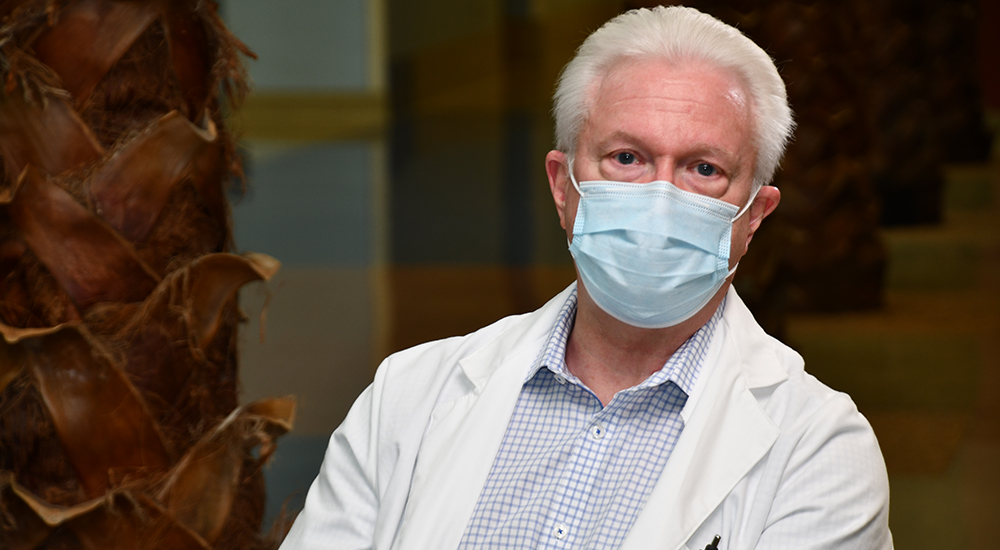 Dr. John Toney, assistant chief of the James A. Haley Veterans’ Hospital Infectious Disease section, has a unique perspective on the importance of taking precautions to avoid catching COVID-19 after he and his family were diagnosed with the disease.

“The best way to keep from getting where we were is don’t get it in the first place,” Toney said. “Wear a mask, wash your hands, use alcohol-based hand gels when you can’t wash your hands. When there’s a lot of people around, keep yourself away.”

Toney, his wife Teresa, and their oldest daughter Elizabeth were infected with the virus in March when Elizabeth gave a friend a ride home from the airport after her friend had travelled out of state and before he started showing symptoms. While his wife was fortunate enough to remain asymptomatic after testing positive for the virus, Toney ended up in the hospital for a week, while his daughter was hospitalized for almost a month. She was on a ventilator to help her breathe for almost three weeks.

Much worse than pneumococcal pneumonia

Toney’s symptoms started one night at home with shaking chills and progressed into a fever. He spent a week quarantined at home trying to fight off the disease. During that time, his senses of smell and taste were also affected. Comparing it to a bout of pneumococcal pneumonia that he went through in 1982, Toney said COVID-19 was much worse.

One day while he was quarantining at home a colleague sent over a meal that included chicken, macaroni and cheese and cornbread, which his wife left outside the bedroom he was staying in.

Toney, his wife Teresa and daughters. His oldest daughter Elizabeth is second from the left in blue shirt. Photo taken in 2019.

“I opened the door and the chicken actually smelled putrid to me,” Toney said. “I just couldn’t eat it.”

The worst day for him was the day he had to admit that he couldn’t fight the disease by himself, that he needed help.

“If you’re asking about when did I get scared, it was the day I had to look my wife in the eye and tell her I’ve got to go to the hospital,” Toney said, his voice cracking with emotion. “It’s tough. You don’t want to have to be that way with your family, but I was really happy I did. As Kenny Rogers said, ‘You’ve got to know when to fold them,’ and to say I’ve got to have some help with this.”

Toney was admitted to a local hospital and was kept in a negative pressure room to help prevent the virus from spreading. He was treated with a number of different drugs and needed supplemental oxygen because of breathing problems. During his fight with COVID-19, he lost about 20 pounds due to issues with eating and diarrhea.

While in the hospital, Toney was only two rooms away from his daughter, who by this time was intubated and using a ventilator to help her breath. While the medical staff was keeping him and his wife up to date on her status, the only time Toney got to see her was as he was checking out of the hospital after a week’s stay.

“I was in the hospital for a week and that was plenty. My daughter wasn’t so lucky. Shortly after she was admitted, they electively intubated her because her breathing had gotten that bad. She was on a ventilator for almost three weeks, but fortunately she did extremely well with the medications they used.

“She was able to come off the ventilator and now is doing fine. It took a little bit of time for her to start feeling better, but fortunately we both survived. There are some people who don’t come back and some people don’t survive.”

While both Toney and his daughter have recovered, he said the uncertainty associated with the disease has taken a toll on his whole family. Not knowing if either were going to live or die, especially in the early days of the pandemic, affects not only the patient, but everyone around them.

Normal is not going to happen for a while

Despite all this, Toney said he understands why some people are hesitant to wear face masks and social distance.

“These are things that are not normal to us, that we don’t like it. We want to get back to where we were, but that’s not going to happen for a while.

“Masks are not perfect, but they really, really help,” Toney explained. “If you really want to protect yourself, get a mask and get a face shield. That’s the best thing you’re going to be able to do until we get effective vaccines on the market.

“I usually tell people if you really want to gamble, go to Atlantic City, go to Vegas, go to Biloxi. Don’t gamble with your health.”