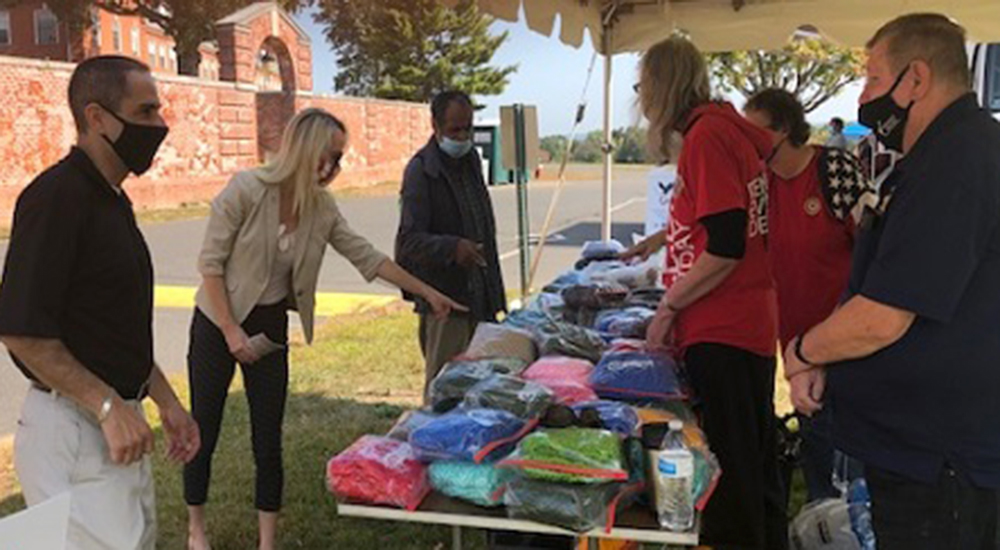 Parts of New England are already experiencing the first frost of the season. That’s a sure sign that winter is fast approaching.

Specialists with the VA New England Health Care for Homeless Veterans Program are starting to look ahead to the winter months and homeless Veterans’ needs.

A good start to the season occurred when regional Veteran Stand Downs were held in Rhode Island and Connecticut.

Over the past several years, events in New England have also expanded to provide services and referrals for any Veteran needing assistance.

But this year’s annual Veteran stand downs in southern New England had to further adapt which has made the stand down mission even more important with critical resources for homeless and underserved Veterans.

This year’s events looked much different. They were conducted both virtually and in person to ensure Veterans with the greatest need received much needed items to get ready for the upcoming winter, which can be brutal in this region.

In the photo above, volunteers with the American Legion Auxiliary display hand knit and crocheted scarves, hats and lap blankets during the Connecticut Veterans Stand Down 2020 in Rocky Hill, Conn. (Photo by Connecticut Department of Veterans Affairs).

It’s never an easy time to be homeless, but this time of year is particularly distressing, said officials with VA Connecticut’s Homeless Services program.

“We had a Veteran come up to us and say, ‘I’ve been in my car for the past several weeks, and it’s starting to get cold out. I need your guys help now before it gets too cold,’” said Jason Mastropaolo. Mastropaolo works at the Community Resource and Referral Center for the VA Connecticut Homeless Services program.

VA Connecticut, using VA funding from the Supportive Services for Veterans Families Program, was able to get the Vietnam-era Veteran into a stable and warm place to live. He’s now working with a case manager to secure local permanent housing.

“We got him off the street and into a warm place,” said Mastropaolo.

Connecticut’s Department of Veterans Affairs organized and hosted its stand down. This year’s event was held over two days. On the first day, experts from local, state and federal programs were on hand virtually. Each provided presentations and answered questions.

Understanding that Veterans still need direct services, both the Rhode Island and Connecticut stand downs made sure to have socially distant resources in place.

In Rhode Island, the 29th annual Stand Down weekend was held Sept. 18 and 19 with a scaled down version at the War Memorial Park in Johnston. Due to safety protocols, only Veterans were allowed into the park.

Veterans were screened immediately upon arrival by VA medical staff from the Providence VA Medical Center.

Despite the reduced footprint, more than 160 Veterans attended and received services. That was about a quarter less than previous years, said Erik Wallin. Wallin is the executive director of Operation Stand Down Rhode Island. Of the 160 Veterans, 31 met with employment and training specialists. Twenty received help with social security benefits. An additional 22 received housing assistance, he said.

In addition, more Veterans this year sought legal advice and counseling than last year. This is a sign that the times have increased the need for such vital assistance, said Wallin.

Representatives from regional Vet Centers were at both the stand downs.

“Operation Stand Down Rhode Island is too valuable a resource to not be done in person,” said Erik Wallin.

Immunizations for this vulnerable population are particularly important.

“As always, the effectiveness of this event can be measured by not only the number of flu shots given, but also the number of Veterans we were able to help,” said Kevin M. Price, nurse care manager for the Homeless Veterans Support Clinic at the Providence VA Medical Center.