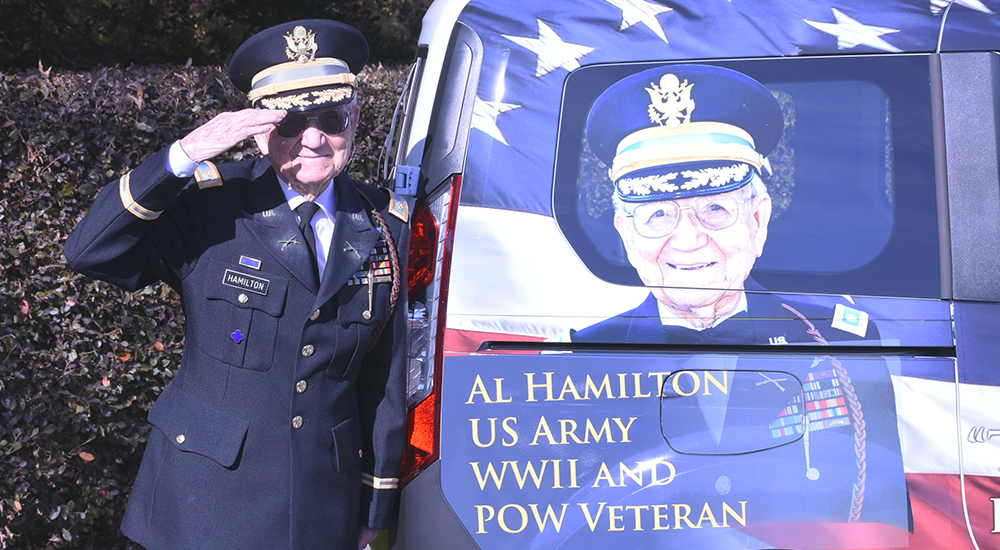 On a beautiful sunny day in December, Disabled American Veterans (DAV) and Blue Star Mothers of the Midlands presented the keys of a brand-new Ford service van to the Columbia VA Health Care System during a dedication ceremony.

Service van donated to Columbia VA to transport Veterans to their medical appointments.

The Blue Star Mothers worked with DAV and other organizations and used the proceeds from the Palmetto Patriot Ball to help raise money for a van to transport Veterans to their medical appointments.

The Blue Star Mothers also used the funds to have the van painted with the likeness of a local Veteran.

The van features retired Army Major Albert Hamilton, a highly decorated World War II Veteran and former prisoner of war. With all the attention at the dedication, Hamilton (pictured above) was a little overwhelmed.

Prisoner of war for nine months

“I’ve never seen anything like this!” he said. Hamilton was happy to talk and reminisce about his service. He explained that people don’t know much about military service unless they have served. He hopes his experiences would help others know how they can help the military.

Hamilton joined the Army just out of high school and deployed to Naples, Italy. He was captured by German forces and held as a POW for nine months. He was liberated in 1945 and retired as a major after 20 years of service to his country.

“Community stepped up, as they always do”

“Our great community has stepped up, as they always do,” said David Omura. Omura is director and CEO of the Columbia VA Health Care System. “The Blue Star Mothers and DAV have come together to raise the funds to give us a van that we can help our Veterans, not only today, but in the future, to get back and forth to their medical appointments.

“Columbia VA hopes Veterans who see this van will know they have a VA that will always puts them first. We’ll do whatever it takes to make sure that they get the care they need.”

Author Marlous Black is a public affairs specialist and photographer Arthur Castle is a visual information specialist, both for the Columbia VA Health Care System.