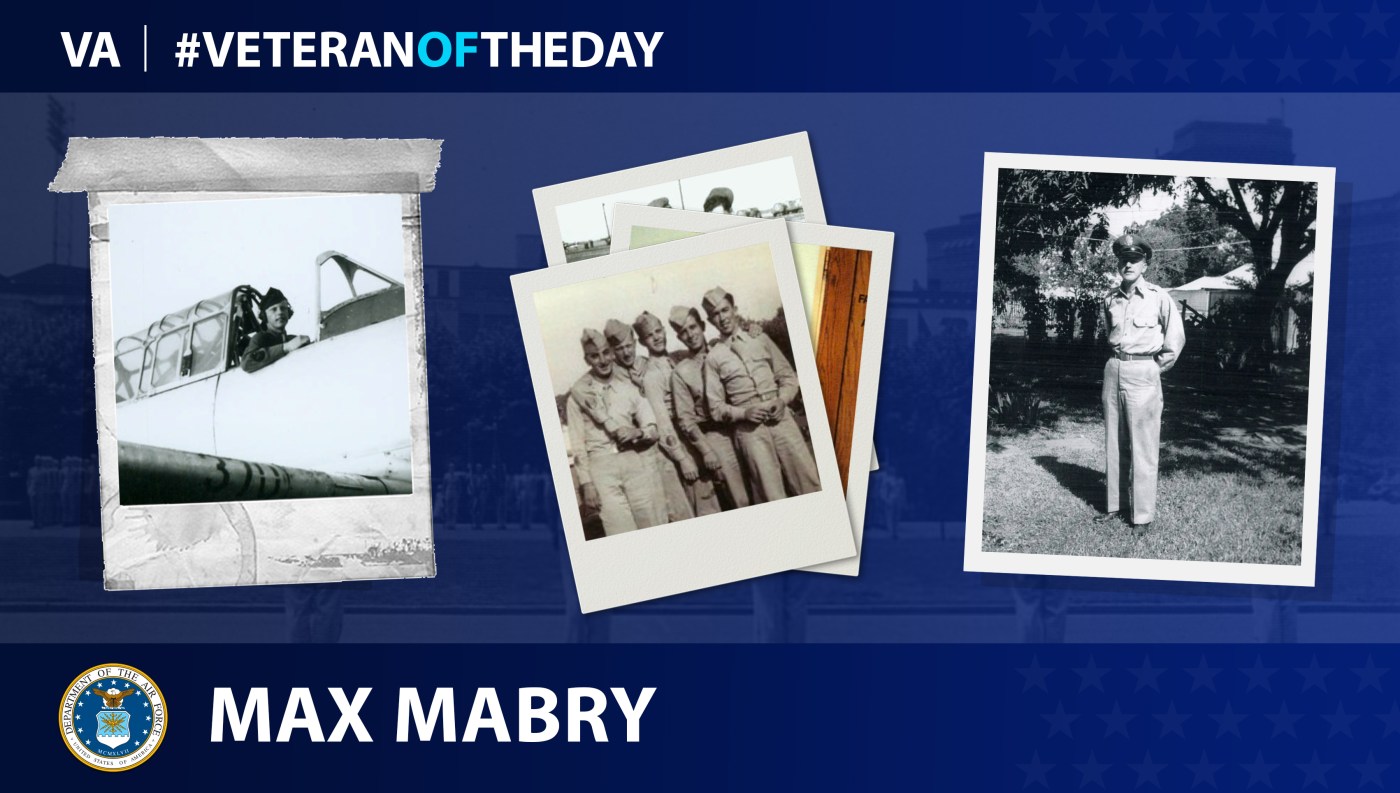 Today’s #VeteranOfTheDay is Air Force Veteran Max E. Mabry, who served as an aviation cadet during World War II and instructor during the Korean War.

In March 1943, a friend of Max Mabry’s became interested in joining the Army Air Forces Aviation Cadet Program. Mabry went with him to Nashville, Tennessee to take the classification exam. While Mabry’s friend did not finish the exam, Mabry decided to take it and passed.

In December 1943, he received orders to report to Camp Shelby, Mississippi and went to Miami Beach for basic training. In February 1944, he transferred to Lockbourne Air Force Base in Columbus, Ohio, where he trained on B-17 bomber planes. Mabry’s group later joined the University of Pittsburgh’s 60th College Training Detachment in Pittsburgh, Pennsylvania, and spent time doing drill and training courses. During the summer of 1944, Mabry went to Greenville Air Field in Mississippi to await placement at one of the three aviation cadet centers. While awaiting placement, Mabry helped mechanics with small jobs on BT-13 planes and flew with a test pilot.

In February 1945, Mabry went to the aviation cadet center at Lackland Air Force Base in San Antonio, Texas and decided to attend the B-29 Flight Engine School in Amarillo to see if he could qualify to fly in the Pacific. There, he learned how to repair damage to planes and prepared to become a flight officer. When Japan surrendered in August 1945, Mabry was told he could join the Army, the Army Reserves or return home. He chose to return home and discharged in November.

After returning to Tennessee, Mabry initially attended the University of Chattanooga. but later transferred to the University of Tennessee. While there, he learned about the newly formed Air Force Reserve Officer Training Corps and joined. He graduated in December 1949 with a bachelor’s degree in electrical engineering. Mabry went to work for the ceramics company American Lava Company and later joined the Electric Power Board in Chattanooga.

When the Korean War started in 1950, Mabry went into the Air Force. Because of his ROTC training, he commissioned as a second lieutenant. After transferring to Keesler Air Force Base in Biloxi, Mississippi, Mabry took courses in ground electronics and radar systems instruction. Due to his previous service during World War II, Mabry served an 18-month tour. He taught ground electronics at Keesler Air Force Base until honorably discharging in October 1952.

After his service, Mabry worked as an electrical engineer with the Electric Power Board and retired as superintendent of the overhead lines department. He was an active member of Red Bank Cumberland Presbyterian Church and the Men’s Sunday School Class and served as a deacon. He also was a member of Red Bank Masonic Lodge #717, Shriners, Alhambra Temple, High Twelve and The Sojourners. Additionally, Mabry is in the Red Bank High School Hall of Fame and was part of the Chattanooga Half Century Club.