Home / Caregivers, Health / Valentines, caregivers and the Veterans they love

Valentines, caregivers and the Veterans they love 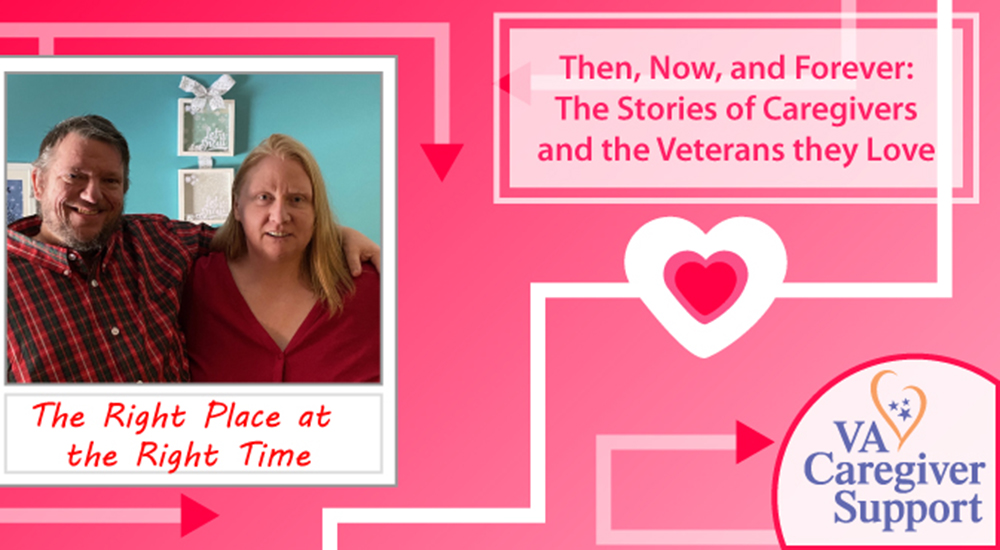 Meet Cathy and John Thomas, a couple residing in New Hampshire whose love story started as a budding romance 26 years ago. Cathy is now John’s caregiver and a mentor in the Caregiver Peer Support Mentoring Program.

Cathy shares her whirlwind story of how she met and married John, and how the Peer Support Mentoring Program helps them both.

The Right Place at the Right Time

When Cathy was 22 years old, she took a trip to Germany to visit a friend. Little did she know, she’d meet Army soldier John Thomas and become his wife six months later. Cathy says their love story started when they were both in the right place at the right time.

How did you meet John?

What did you think of John when you first met?

Cathy: I liked him right away. He was cute and was a military police officer, so he had this demeanor of authority but was also an all-around nice guy.

When did you know John was the one?

Cathy: I knew he was the one when I was packing up to leave Germany and I didn’t want to go.

Did John feel the same way?

Cathy: Yeah. Before I left, John called his mom and told her about me. So, instead of going back home to Massachusetts, I went to his mom’s house in Indiana so we could continue to be together when he came home on leave. Instead of continuing to date when he returned, we got married.

What’s your fondest memory of you and John throughout your marriage and what do you love most about him?

Cathy: That would be the day I found out I was pregnant with our first child, my daughter. John was thrilled. It brings a tear to my eye just thinking about it.

John has kept his sense of humor throughout the years and he tries his best to be a good father and husband. That’s what I love most about him.

Do you have any Valentine’s Day plans?

Cathy: John is living with PTSD, so it’s a little harder now. Instead of going out, I usually decorate the house, make dinner, and we’ll play games with our two children. The four of us will be spending Valentine’s Day together.

How are you involved in the Peer Support Mentoring Program?

Cathy: I have a Facebook group that I run with other caregivers who are being mentored, and I also mentor through group conference calls.

How does the program help you and other caregivers?

Cathy: There’s camaraderie throughout the Peer Support Mentoring Program. We lift each other when we’re down. I believe other caregivers don’t feel as isolated with a peer mentor. They have someone they can talk to about anything and know that the mentor won’t judge them.

As a mentor, it gives me a sense of purpose.

John served 18 years in the Army and you’ve been his caregiver for almost 10 years. What advice would you give to other caregivers, especially those who are spouses?

Cathy: Try to be as patient as you can. It’s hard because being a caregiver can be stressful and can take an emotional and mental toll on you. Be patient.

What keeps you going as a caregiver?

Cathy: I married John for better or worse and through sickness and in health. If he could put his life on the line to serve his country, I can certainly do this.

About the Caregiver Peer Mentoring Program

The Peer Support Mentoring Program provides an opportunity for caregivers to receive guidance and to share their experiences, wisdom, skills and passion with other caregivers. The program is offered under VA’s Caregiver Support Program, Program of General Caregiver Support Services (PGCSS).

PGCSS is available to all caregivers of Veterans enrolled in VA healthcare. There are no eligibility requirements for PGCSS and no formal application. Learn more about the Peer Support Mentoring Program.

Michelle Stefanelli is the national program manager for the Care Management and Social Work Service.