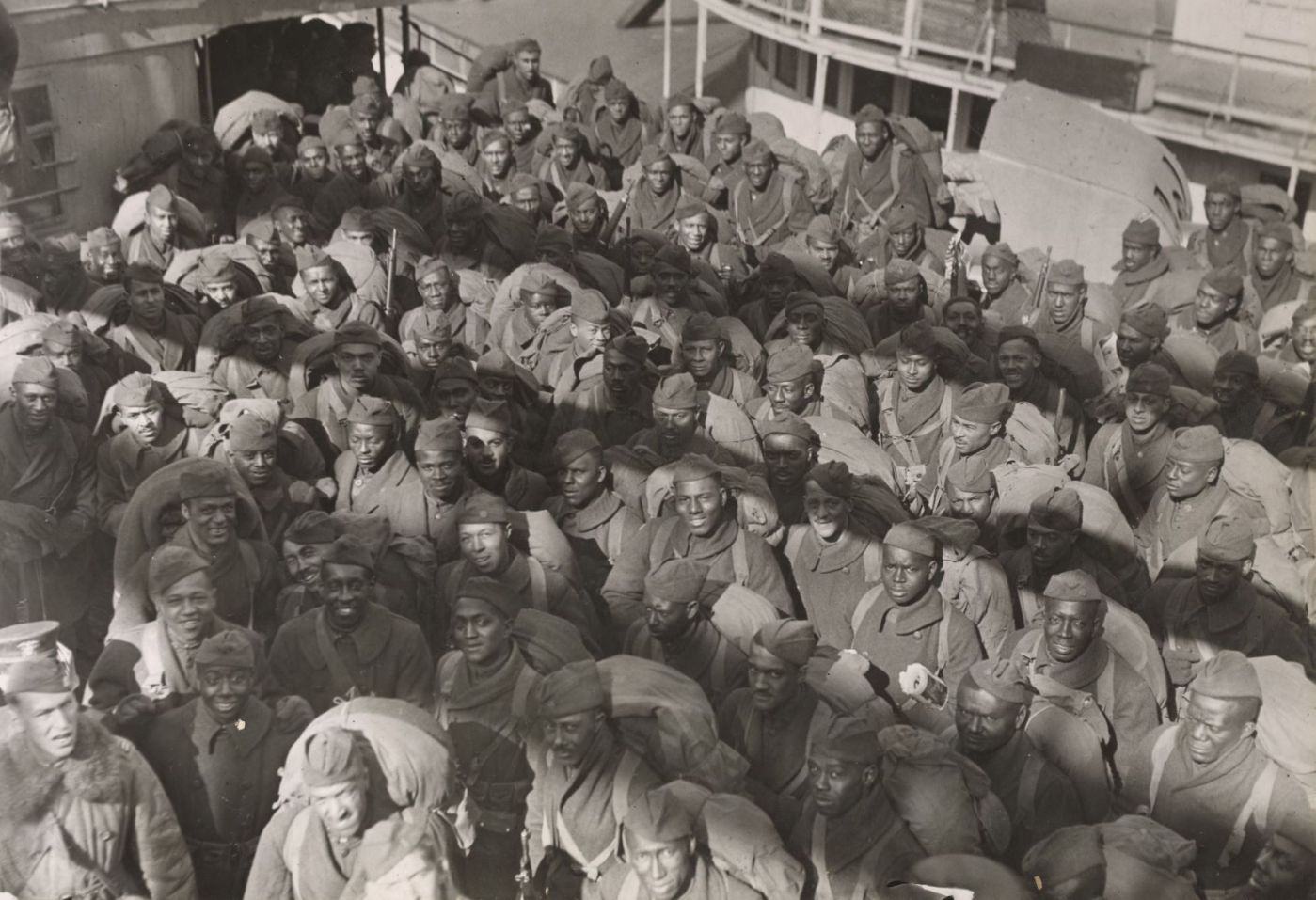 This is the third installment in a three-part series on the officers and men of the 349th Field Artillery Regiment in World War I. These blog posts profile the World War I service and post-war experiences of three Veterans of the 92nd Division’s 349th Field Artillery Regiment, one of the Army’s first predominately African-American units. Alabaman and Colonel Dan T. Moore was its reluctant white commander. First Lieutenant Everett Johnson, a black officer, commanded Battery E, and Sergeant Robert Samuel Chase was one of Johnson’s non-commissioned officers. All three survived the war and are interred in national cemeteries maintained by VA’s National Cemetery Administration. Both Johnson and Chase, highly skilled and educated, faced their own challenges after the war.

Battery E, 349th Field Artillery Commander Lieutenant Everett Warren Johnson (1896-1964) and one of the non-commissioned officers in his unit, Sergeant Robert Chase Johnson (1891-1958), entered the war from similar backgrounds. Johnson volunteered for an officer training program and Chase was drafted, but they fought on the same battlefield and chose similar post-war professions.

The Philadelphia born Johnson left Penn State College two months after the United States entered WWI and enlisted in the Army’s only Black-officer training program at Fort Des Moines, IA. On October 14, 1917, he was commissioned a first lieutenant and assigned to the 349th Field Artillery at Camp Dix, NJ. After additional training at the Army’s artillery school at Fort Sill, OK, he went to Philadelphia to recruit African Americans with the technical education necessary to serve in the field artillery.

Shortly later, Johnson sailed to France, where was given command of Battery E. He led them in action during the final weeks of the war and was honorably discharged on April 15, 1919, a month after returning home.

Johnson resumed his studies and graduated from the University of Pennsylvania with a bachelor’s in education in 1924. He devoted his life to advancing the opportunities of African Americans through education and religion. He held leadership roles in Christian education organizations and advocated for Black Veterans.

In 1939, Johnson headed a coalition of Veterans groups in Philadelphia lobbying for a Black unit in the state’s National Guard. He retired from teaching science in 1963 at an accelerated Veterans Program at Benjamin Franklin High School. He died of cancer a year later in the city’s Veterans Administration Hospital. He is buried in Beverly National Cemetery, NJ (Sec. Y, Site 2171).

Baltimore native Robert S. Chase served in Johnson’s battery. He studied chemistry at Howard University and graduated in 1916. WWI interrupted a budding teaching career in Delaware when he was drafted into service in the spring 1918. Chase sailed for France less than two months after leaving Wilmington for training at Camp Dix.

Chase supervised a machine gun crew attached to Battery E. The 349th lost no members in combat but it had met strong enemy resistance. A soldier in Battery F described the unit’s experience: “[I]n constant danger from the enemy’s artillery bombardment and air raids… our men endured many hardships and privations and came dangerously near being gassed, shell shocked, or struck by falling shrapnel…” The experience caused Chase to begin preaching Christian values to his comrades while in France.

His post-war life reveals one of personal unrest. Unable to find work as a chemist, he studied zoology and advocated for vocational studies. He began graduate degrees at Morgan State University, Hampton Institute, University of Pennsylvania, and Cornell University. He taught throughout Maryland, including principalships in Rockville and Elkton. His last teaching post was at Armstrong High School in Washington, D.C. Though that job began in 1936, his life began to unravel by 1940.

“Shattered nerves” forced him to leave teaching and to become a truck farmer. He was taken into custody that year after his wife became fearful that he was “on the verge of mental collapse and might have brought harm to himself or someone else.” This followed episodes in which Chase spoke of God telling him to preach. He was sent to the VA hospital at Perry Point, MD, and diagnosed with a mental disorder caused by his war experiences.

Chase was eventually released from the hospital and spent the rest of his life spreading the gospel as a “streetcorner preacher” in Baltimore. He died in the VA hospital at 67. He was memorialized as a tragic figure – “known by hundreds as the onetime brilliant teacher who became shell-shocked in WWI.”

A Methodist preacher who knew Chase for 40 years described him a “victim of war” forced to persevere through “handicap” and that he was “one of Baltimore’s finest characters.” He was thankful that he did not pass “un-noticed, unwept, and un-sung.”

Richard Hulver is a historian at VA’s National Cemetery Administration.