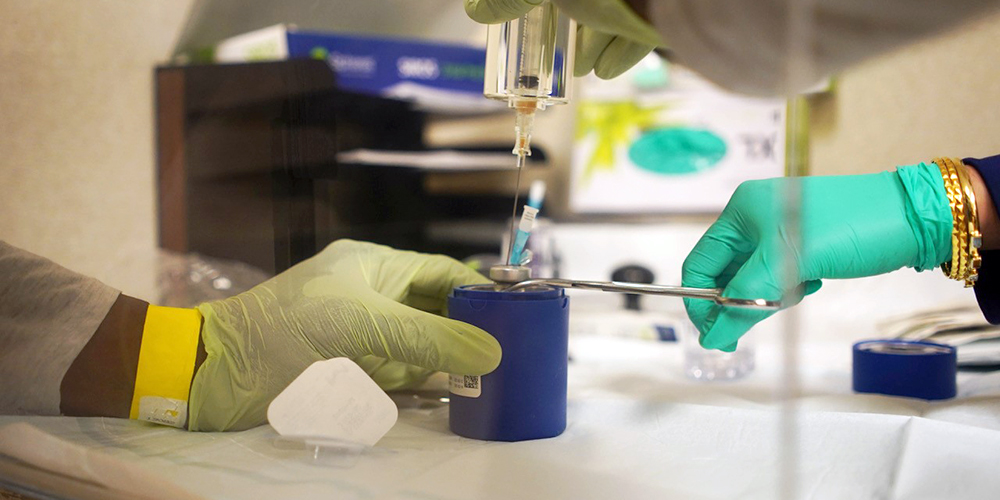 The procedure took place at the Dallas VA Medical Center. The rare and aggressive cancer occurs in less than 20,000 people across the U.S. each year.

Liver cancer diagnoses in the United States have tripled over the past three decades, and its effects on the health of Veterans will likely continue growing over the next several decades.

“The most advanced cancer care available”

“It took an incredible amount of work to pass the necessary inspection processes and get the program up and running,” said Dr. Gordon Butler, VA Interventional Radiologist. “It is a tremendous source of pride that we were able to set this up and ensure our Veterans have the most advanced cancer care available.”

The Food and Drug Administration approved SIRT using Y-90 glass microspheres for humanitarian use in 2000. It approved the use of Y-90-bearing resin microspheres in 2002.

These microscopic, radioactive, microspheres are used to control and even eliminate cancers in the liver that cannot be removed with surgery.

In the photo above, Dr. Butler prepares the y-90 resin microspheres (SIR-Spheres) for transfer.

“We are one of a few sites in all of North Texas that offers both types of microsphere therapies as treatment for cancers in the liver,” said Dr. Irfan M. Farukhi, VA North Texas chief of nuclear medicine.

The upside to using microspheres to treat liver cancer

Radiation, when delivered in adequate amounts, can be deadly to cancerous tissue. However, radiation is also lethal for healthy cells. This is something that Dr. Farukhi says is one of the upsides to using microspheres to treat liver cancer.

“We were able to deliver nearly 200 Gy radiation to the tumor, while normal tissues received less than 15 Gy of radiation, which is a phenomenal result,” said Dr. Farukhi. “Y-90 emits Beta Radiation and that radiation kills tissues. It will cause a break in the DNA of a cell and that cell will die because it is not able to replicate.”

Once inside the body, the resin microspheres become permanently lodged in the tiny vessels of the tumors. The radiation, however, will decay over time. The half-life of Y90 is 64 hours. As a result, most of the radiation is deposits in the tumor over the first week.

“There are generally no side effects from the treatment and most patients go home the same day,” said Dr. Butler.

SIRT usually requires just one treatment. However, a subsequent treatment might be administered to deliver a sufficient dose of radiation to the tumor. Often, SIRT can offer Veteran patients, who might otherwise be untreatable, an extension on life.

“Often it’s up to 14 months,” Dr. Butler added. “In certain instances, where the patient has limited disease, SIRT can offer a curative treatment to patients who would otherwise not have a curative option.”