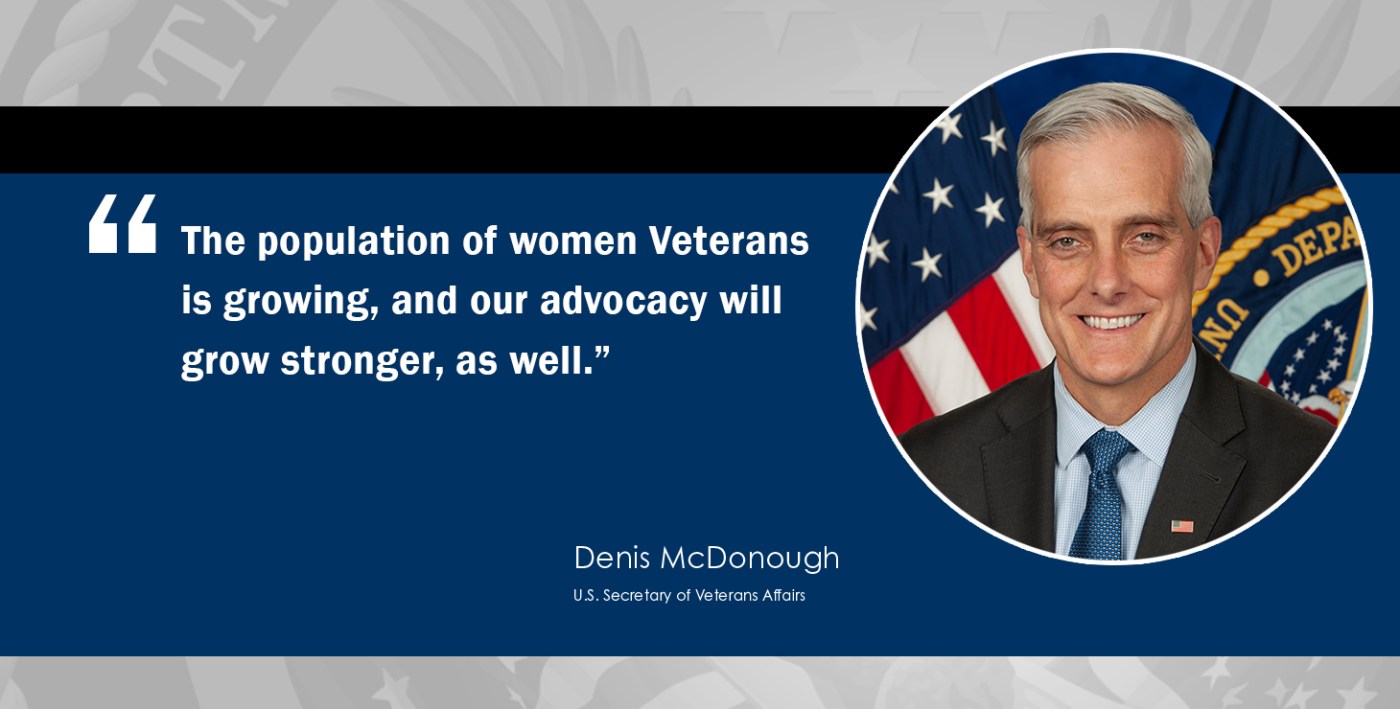 Today, March 8th, is the 110th anniversary of International Women’s Day. It is the perfect time to pause, recognize and honor the enormous contributions and accomplishments of women from all walks of life who have long served as champions of social change and equal rights for all Americans.

The fight for equality has been a long one. It is a battle not yet won. Even with the enormous strides of the past century and the inauguration of our first woman Vice President, we have far to go in achieving those unalienable rights of “life, liberty and the pursuit of happiness” for every American, woman and man.

Here at VA, we especially celebrate the tremendous courage of women who are Veterans. Few better exemplify the courage of American women in the fight for equality than those who have served this country in uniform even as they fought our nation’s wars. Women have been defending our freedom in every conflict since the Revolutionary War. We should all find great inspiration in their examples of courage, of unwavering service and sacrifice for this country, even before its founding, in defense of those rights they have not in full measure enjoyed themselves.

Think of the courage of women like Revolutionary War Veteran Deborah Sampson, a formerly indentured servant. Determined to serve, Sampson, as did many other women in that day, disguised herself as a man and adopted a man’s name so she could help win this country’s freedom, fighting in an elite infantry unit in the Continental Army.

Imagine the strength of women like Civil War Veteran and former Prisoner of War Dr. Mary Walker who, when refused for service in the Union Army, volunteered her services and worked for free until she was appointed a War Department surgeon. Thanks to President Andrew Johnson, Dr. Walker was the first woman to be presented the Medal of Honor, recognition later rescinded, and then even later reinstated by President Carter in 1977.

Consider the sacrifice of women like Major Charity Edna Adams, who commanded the 6888th Central Postal Directory Battalion, the only all Black Women’s Army Corps unit deployed to Europe in WWII. Major Adams – the first Black woman to receive an Army commission – and the 850 women under her authority were so dependable that President Truman ordered that “there shall be equality of treatment and opportunity for all persons in the armed services without regard to race, color, religion, or national origin.”

There are thousands of stories like these that we will never know. They are stories of unnamed, courageous women who did not seek special treatment but, rather, equal treatment to move things forward for themselves and for the women who would follow. Thanks to the Military Women’s Memorial and Retired Brigadier General Wilma Vaught – an Air Force Veteran who knows a thing or two about being first and is celebrating her 91st birthday this month – we are now learning more and more about these women and their extraordinary efforts to teach us what service truly means.

The Military Women’s Memorial helps fulfill President Biden’s admonition that during Women’s History Month and throughout the year, we honor the “accomplished and visionary women who have helped build our country, and pay tribute to the trailblazers from the recent past for building a nation of endless possibilities for all of its women and girls.”

I am inspired by the stories of these women, and others – especially the stories of trailblazers right here at VA. We need look no further than our very own Dr. Carolyn Clancy, Acting Deputy Secretary, whose tenacious commitment to eliminating disparities in the care of women and minorities has led to a Veteran-focused approach with improved healthcare outcomes.

We can look to surgeon Dr. Marika Hess of West Roxbury’s VA Medical Center. Dr. Hess is the daughter of immigrants from Czechoslovakia, who lived in an immigration camp while waiting for a new and better future in America. Because of the acceptance, opportunity, and hope America offered, Dr. Hess grew up knowing that there was no better way she could serve her new country than by caring for the men and women who serve our nation.

There’s Kayla Williams, an Army combat Veteran, our Assistant Secretary for Public Affairs who previously spearheaded VA’s efforts to amplify the I Am Not Invisible Campaign. This visible demonstration project created by Liz Estabrooks then with the Oregon Department of Veterans Affairs, and now Deputy Director of VA’s Center for Women Veterans, helps women hear the word Veteran and see an image of themselves.

And there is Tanya Bradsher, third generation Army Veteran, who will join us as Chief of Staff on Monday, March 15th. Bradsher’s diverse background as a national security policymaker – having worked at the White House National Security Council, the Department of Homeland Security and on Capitol Hill – will shape the culture of VA. She will build coalitions, develop high performing teams, and ensure that our policies match our priorities.

So, I’m honored to serve alongside and proud to pay tribute to these women who broke ground on opportunities so that others could break glass ceilings. Today, there are over two million women Veterans among our nineteen and a half million Veterans. The population of women Veterans is growing, and our advocacy will grow stronger, as well.

At VA, that means we will provide a safe, inclusive, equitable environment for all employees and all the Veterans we serve. We must make good on Lincoln’s promise and our mission of caring for those “who shall have borne the battle.” That mission must be grounded in inclusion and diversity.

Moving forward, let’s continue to fight to ensure VA welcomes and embraces all Veterans, and devote our time and energy to doing the great work needed for future generations.