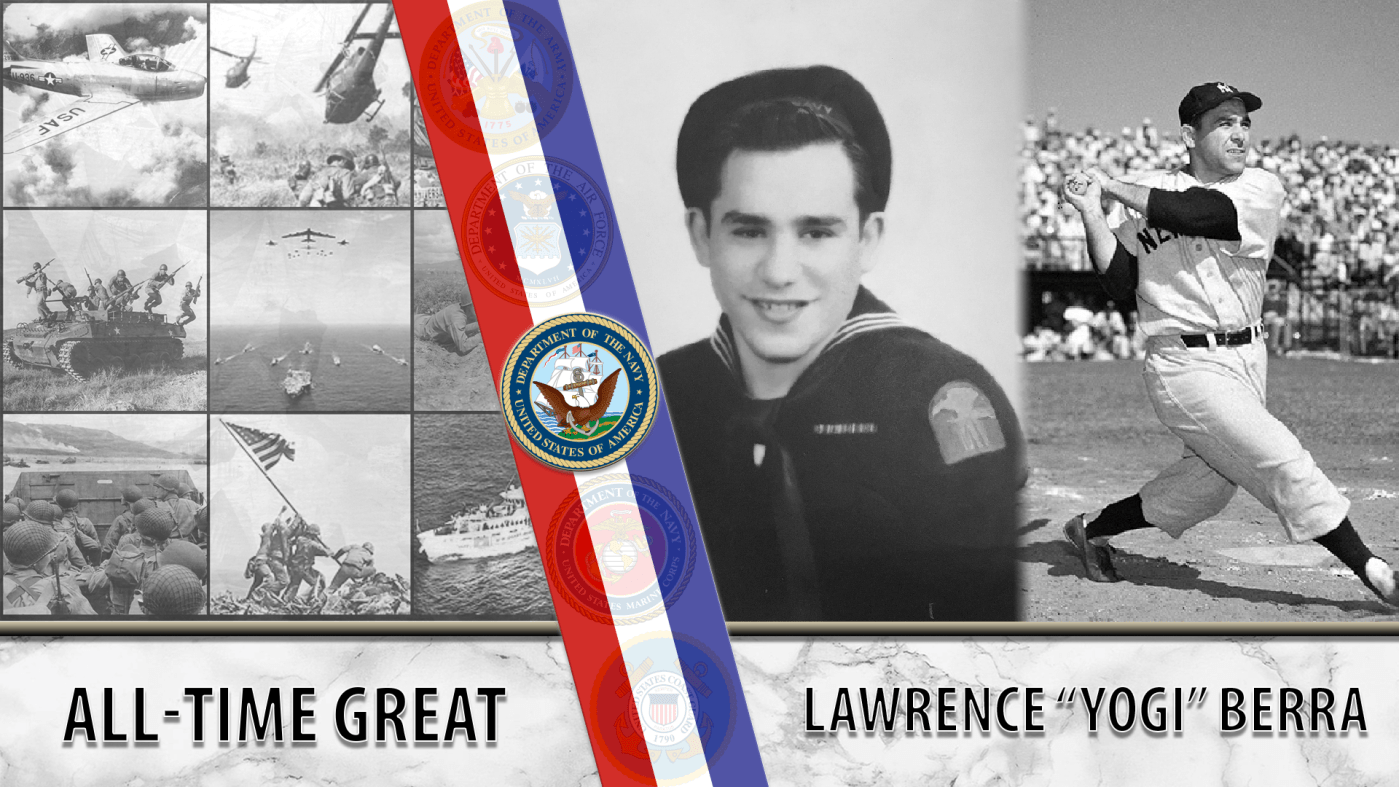 Lawrence “Yogi” Berra is well-known for his long and successful playing career with the New York Yankees, his induction into the Baseball Hall of Fame and his roller-coaster post-player career as a coach and manager. Not as well-known was his service as a Navy gunner during World War II.

Born Lorenzo Pietro Berra in May 1925, Berra grew up in St. Louis. He dropped out of school in the eighth grade to help his family financially. Berra played baseball as a teenager in American Legion Baseball, which was when he was given the nickname, “Yogi.” A friend thought Berra resembled a Hindu yogi because of the way he folded his arms and legs when waiting to bat.

During his teenage years, Berra tried out for the St. Louis Cardinals. They offered Berra a contract and signing bonus of $250. But that was half the $500 bonus they offered his friend, Joe Garagiola. He turned down the Cardinals and went back to his job at a shoe factory. The next year, he tried out for the Yankees. In November 1942, the team offered Berra a contract and a $500 signing bonus to play with the Norfolk Tars, a Yankees affiliate. He accepted.

In May 1943, just as Berra turned 18, he got word from Uncle Sam to take a pre-induction physical. He passed the physical and was allowed a deferment to finish the baseball season. Berra initially opted for the Army but was persuaded to join the Navy in hopes to be on a naval baseball team. Although Berra joined the Navy, his deployment prevented him from playing on the team.

Berra was sent to Bainbridge, Maryland, for basic training in 1943. In January 1944, he attended amphibious training in Norfolk, Virginia. Upon completion, Berra deployed to Europe, where he began training for the coming landings in Normandy, France. He was assigned as a gunner’s mate to USS Bayfield, an attack transport. During the D-Day landings, Berra was stationed on a rocket boat. He then departed from the Bayfield to help protect the waves of infantry by providing suppressive fire. Berra fired machine guns and rocket launchers, pounding hostile German bunkers.

In July 1944, Berra participated in Operation Dragoon, the invasion of Southern France. Berra and his comrades were sweeping the beaches with intense fire. Their gunning was directed at a former beach resort the Germans were using as a machine gun bunker. While shooting at this emplacement, Berra was struck in the left hand by an enemy bullet. Berra earned a Purple Heart, however, he never received it and his family is working to obtain it on his behalf.*

Berra was stationed in Tunisia after his participation in Operation Dragoon. In January 1945, he was sent back to the United States and stationed at the Naval Submarine Base, New London, Connecticut. Berra was placed on Welfare and Recreation and subsequently played baseball for the Navy. He was discharged in May 1946 as a seaman second class.

Berra went on to have a legendary career with the Yankees. In his 19 years as a pro player, Berra won 10 World Series championships, the most ever for a single player, made 18 All-Star appearances and was American League Most Valuable Player (MVP) three times. When Berra retired as a player, he became the manager for the Yankees in 1964. He led the team to the World Series that year but was fired when they lost. The next season, he became a coach for the Mets and then manager in 1972, until he was fired three years later. He then went back to the Yankees as a coach and, in 1984, he was manager again, only to be fired the next year.

Berra became famous for his malapropisms, which was when he would misuse a word or phrase. These were also known as “Yogi-isms,” with one of them being, “We’re lost, but we’re making good time.” Berra was an astute businessman and a popular product spokesman.

Berra died in September 2015. He was 90. Two months later, he was posthumously awarded the Presidential Medal of Freedom.

*Edited on 4/16/21 to indicate update on Berra’s family’s and museum’s efforts to find his purple heart. See family comment below.