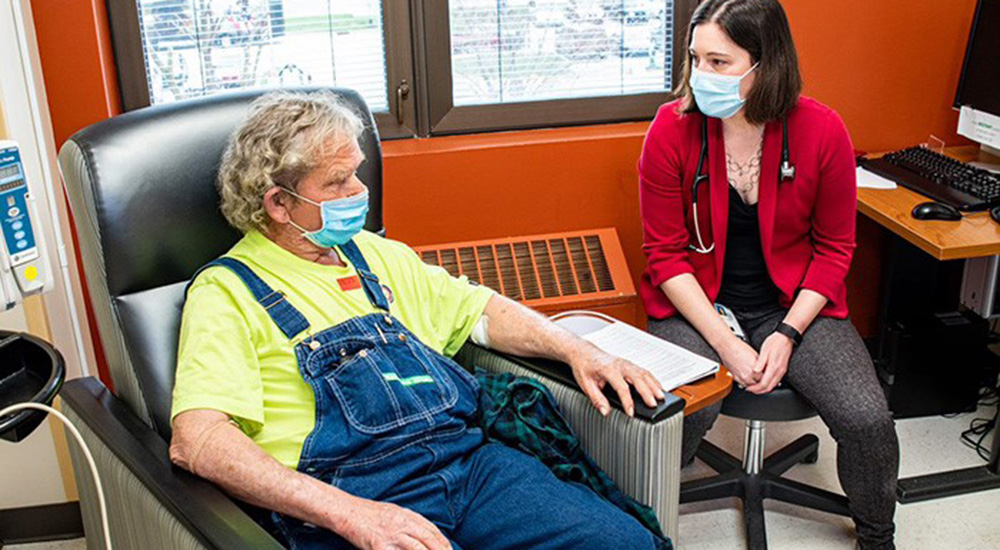 Vietnam Veteran Bobby Richardson can attest to the effectiveness of early screening for lung cancer. Last year, he found out that he had stage 1 lung cancer when he took part in a nationwide VA program to boost the number of Veterans screened for lung cancer. He then got treatment through a VA clinical trial.

The 69-year-old resident of Bloomfield, Indiana, says his VA doctor recommended screening for lung cancer based on his family history. Several aunts had died from cancer and Richardson had just lost his brother to advanced lung cancer. Following his own diagnosis, his sister was diagnosed with a different form of cancer.

“My brother didn’t have any symptoms up until the last year before he found out he had lung cancer,” Richardson said. “He kept complaining that something was wrong. His doctor said, ‘You are just getting emphysema.'” It wasn’t until Richardson’s brother switched his care to VA that he was diagnosed with stage 4 lung cancer.

Richardson, who drives a lumber truck for a living, says he was happy to participate in the screening program, the VA Partnership to increase Access to Lung Screening, or VA-PALS.

“I was glad to do it because cancer runs in my family,” he said. “That way I didn’t have to worry about it.”

Fortunately, his doctors caught his cancer early when it was still treatable.

The study through which Richardson subsequently got treated is the VA Lung Cancer Surgery Or Stereotactic Radiotherapy (VALOR) clinical trial. The VA-sponsored study compares two treatments for lung cancer – surgery vs. targeted radiation.

Investigators hope to find out which treatment results in a better five-year survival rate for stage 1 non-small cell lung cancer.

“I would definitely recommend other Veterans get screened.”

Average age of diagnosis for lung cancer about 70

Historically, surgery to remove cancerous tissue has been the standard for treatment of stage 1 non-small cell lung cancer. However, surgery can be physically taxing for some patients, especially those who are elderly. Given that the average age of diagnosis for lung cancer is about 70, advanced age can be a significant factor in patient survival.

Both surgery and SBRT can cure stage 1 non-small cell lung cancer. But no large studies have compared the effectiveness of these two therapies in patients who are healthy enough to get surgery. VA researchers aim to collect data that will help physicians choose the most effective treatment for each patient.

Dr. Drew Moghanaki, radiation oncologist and co-chair for the VALOR study, believes that providing more options for patients with lung cancer is critical. “If we had data that showed that surgery or radiation therapy was better for a given patient, then we would be able to use safety and other criteria to decide which treatment to give,” he said. “We would have more options to better match each patient to the optimal treatment.”

One year after treatment, Richardson is cancer-free. He will undergo follow-up care in VA for five years. He says he’s one of the lucky ones.

“My experience was pretty positive because my doctors cured me,” Richardson said. “The thing of it was, I never felt sick, never felt bad. I didn’t even know I had cancer until they told me. I would definitely recommend that other Veterans get screened.”