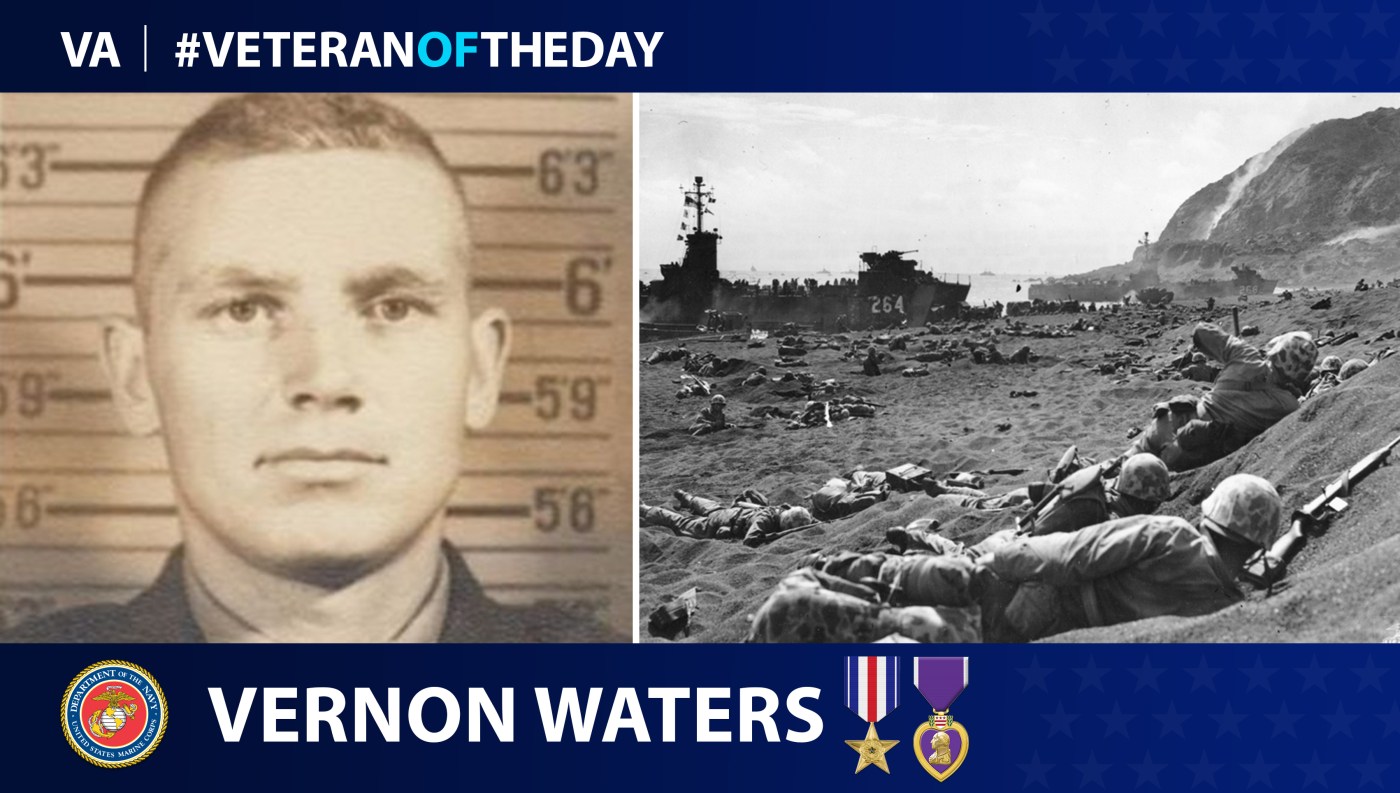 Today’s #VeteranOfTheDay is Marine Veteran Vernon Waters, who was killed in action at Iwo Jima and buried in the National Memorial Cemetery of the Pacific.

By all accounts, Vernon J.H. Waters was a giant of a man.  Author Bryan Mark Rigg writes in his book “Flamethrower” about Iwo Jima: “He was a Marine everyone looked up to literally and figuratively.”  He stood 6’6” and weighed around 245 pounds.  He had hands that were bigger than most people’s heads.

Waters grew up on a farm in Froid, Montana. His father, George Senior, stood around 6’10”; his brother, George Junior, stood 6’7” and was a Marine in the 4th Marine Division who fought at the battles of Saipan and Tinian. After graduating from high school in 1940, Waters bounced around from working on the farm to a shipyard in Seattle.  In 1943, he enlisted in the Marine Corps. He wanted to be with the best.

Battle after battle, Waters proved his worth in action.  He saw action on Guadalcanal, Bougainville, and Guam. His leadership and comrades grew fond of him. On Guadalcanal, he became a flamethrower operator and demolition expert. He would learn to either “burn it or blow it.”

During the battle for Guam, he survived one of the largest “Banzai” attacks of the war with over 5,000 Japanese counterattacking at midnight. Assigned to the 1st Battalion, 21st Marine Regiment, 3rd Marine Division, Waters’ unit prepared for the next battle. Aboard ship, his division stayed in reserve for the big attack on Iwo Jima. On Feb. 19, despite a massive pre-invasion bombardment, the 4th and 5th Marine Divisions attacked and suffered heavy losses.  The 3rd Marine Division went into battle Feb. 21. With his flamethrower and demolition satchels in tow, Waters pushed through enemy defenses knocking out pillboxes and wounding or killing dozens of Japanese Army soldiers. On March 3, 1945, Waters died from an enemy bullet.

For his actions, Waters received a Silver Star. The citation accompanying the medal noted that “His heroic action undoubtedly saved the lives of many…and immeasurably contributed to the advance of his unit.”

Waters is buried at National Memorial Cemetery of the Pacific located at Punchbowl Crater in Honolulu, Hawaii. Visit his profile page on VA’s Veterans Legacy Memorial at www.vlm.cem.va.gov/0899/VERNONJHWATERS

During the month of May, VA partners with Carry The Load, a non-profit organization dedicated to honoring and remembering the fallen.  Throughout the month, Carry The Load supporters will march over 15,000 miles along four distinct routes visiting 42 VA national cemeteries making their way to Dallas, Texas for Memorial Day 2021. One of the servicemen whose legacy they will be carrying along the way is Marine Corps Veteran Vernon J.H. Waters.