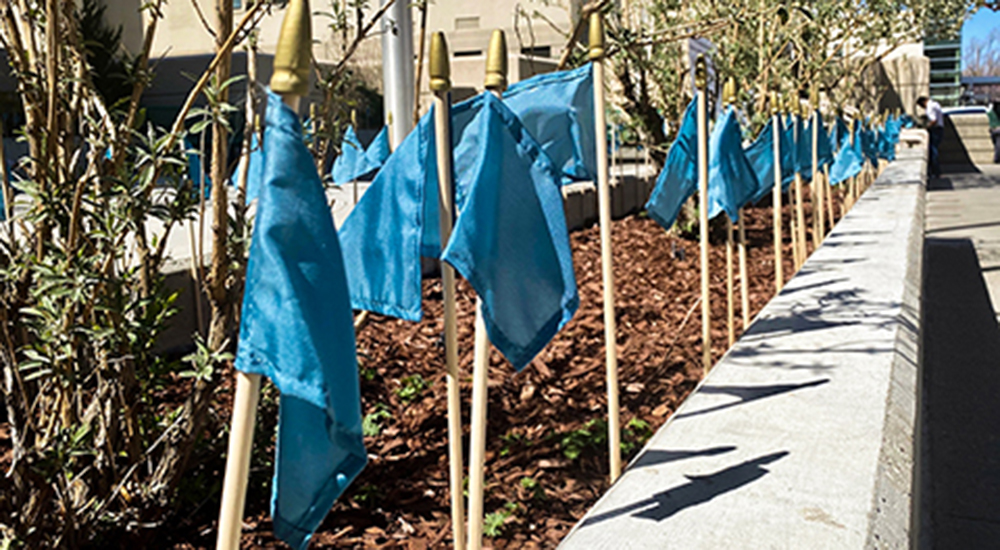 We believe you – and we believe in you. Though a simple sentiment, to a victim of Military Sexual Trauma (MST), it can have a tremendous impact. MST survivors can have unique needs for support and healing.

Many survivors do not want to tell others about their experiences, fearing they will be judged or not believed. This fear leads many to suffer alone.

Over 1,000 Veterans who receive their care at VA Sierra Nevada Health Care System have experienced sexual trauma in the military. Many of these victims are women. One in 50 men within VA responded “yes” when asked if they have experienced MST.

Teal is the color for Sexual Assault Awareness Month. Some VA hospitals, including VA Sierra Nevada, placed the teal flags pictured above around the hospital.

VA offers help to MST victims with no required documentation. Veterans are not required to have reported the MST assault when it occurred, sought care within a certain time frame, or to have applied for service connections for an MST-related condition to receive VA care.

For Anderson, this care was vital to the healing process he is undergoing. “Once I started going to VA and speaking to therapists, started meeting people who have been through the same thing, it helps,” he said. “It does, it really helps.”

Victims of trauma often seek care for more than just the trauma itself. At VA, Veterans of all service eras, branches, backgrounds, gender, sexual orientations and physical sizes have experienced MST. MST can affect survivors’ physical and mental health, sometimes even many years or decades later.

The effects can include strong emotions, sleep disturbances, relationship and trust issues, and unsafe coping behaviors.

“That top step is the best feeling in the world.”

The path to healing can be rigorous and long. “It’s going to be a hard challenge, it’s going to be walking up a million flights of stairs, but once you get to that top step, it’s the best feeling in the world,” Anderson added.

Sexual trauma can include being pressured or coerced into sexual activities, sexual contact without your consent, physically forced sex, as well as other unwanted actions.

It can be tremendously healing for MST survivors to learn that someone understands they have been through something challenging and that the potential impacts of sexual assault and harassment are taken seriously. No two victims are alike and their needs may be entirely different.

Ryan Coverdell is an Army Veteran and a public affairs specialist for the Reno VAMC.