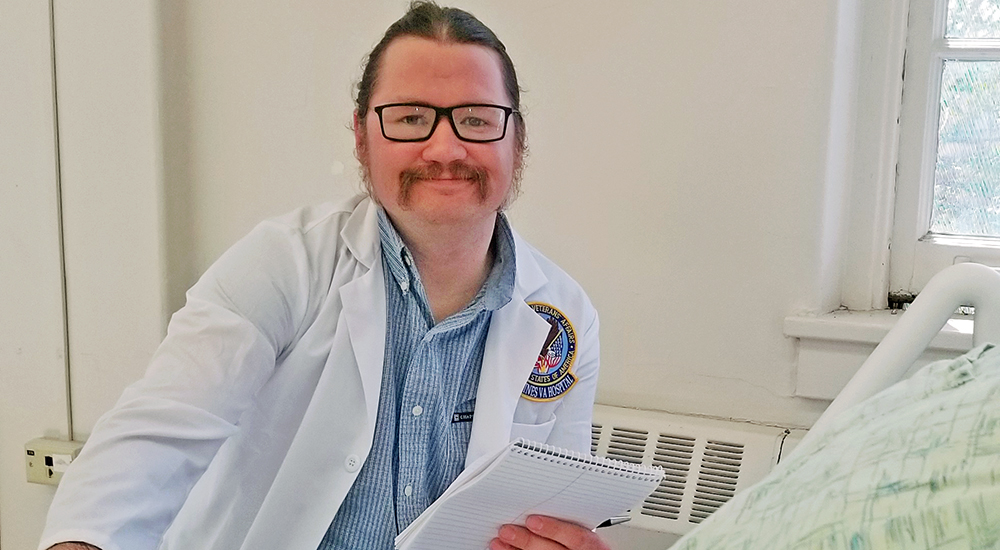 An Iraqi battlefield is not where most people decide what to do with the rest of their lives.

Matt Mason is not most people.

From 2005 to 2006, the Army infantryman patrolled the Iraq-Syria border, quelled sectarian violence in Mosul and battled insurgents in Baghdad.

He also had to figure out his college class schedule.

“My friend convinced me to go to college, and I had to choose a major,” he said. “I really enjoyed the combat lifesaver courses we had to take and learn how to start IVs and do wound care, that sort of stuff. I figured I would just take this and see how it works out.”

Back from Iraq after 16 months and accepted into Northern Illinois University, Mason (pictured above) left the military in 2007.

A connection with his fellow Veterans

According to Mason, it was during nursing school when he was first treated at Hines VA Hospital for injuries sustained in the Army. Feeling a connection with his fellow Veterans, he began volunteering and soon considered becoming a VA nurse.

“After getting experience as a patient and a volunteer, I knew this is where I wanted to be,” he said.

It’s that Veteran connection that’s kept Mason as a Hines nurse since 2012.

“It’s the whole reason I’m here. You can go all different directions in nursing, but I knew I wanted to care for my fellow brothers and sisters in arms. That connection is unprecedented,” Mason said. “It drives me to be a better nurse because I expect that same kind of care that’s given to me if I was on the other side of that bed.”

According to Mason, the connection is also felt by his patients.

“It’s eye-opening for a lot of Veterans,” he said. “It’s really cool. We start sharing stories. Even in a negative situation, I can go in and explain, ‘Hey, I’m a Veteran and I’ve been in your shoes,’ and it totally changes the dynamics.”

In 2020, Mason’s career, like the country, took an unexpected turn as COVID-19 spread. Immunocompromised from a service-connected disability, Mason could no longer work directly with his fellow Veterans. In August 2020, he transitioned to nursing education to support Hines VA’s outpatient clinics.

“It was pretty hard leaving the bedside.”

In his new role, Mason helped educate new employee nurses, teach procedure and documentation changes, and ensure quality and competency, according to Mason.

“It brought me back to bedside care,” he added. “And it re-lit a fire. That’s why I’m here, to be with my fellow Veterans, to be with my brothers and sisters. It came full circle. COVID had brought me away from it and made me reappreciate it when I got back into it.”

Although Mason’s journey is unusual to many nurses, it offers him a unique perspective of Veteran care and his role in it. “VA nurses understand what kind of care Veterans truly need even if they’re not Veteran,” he said. “I would say give it a chance. They’ve helped me. They can help you too.”

Matthew Moeller is a public affairs specialist for the Hines VA Hospital.