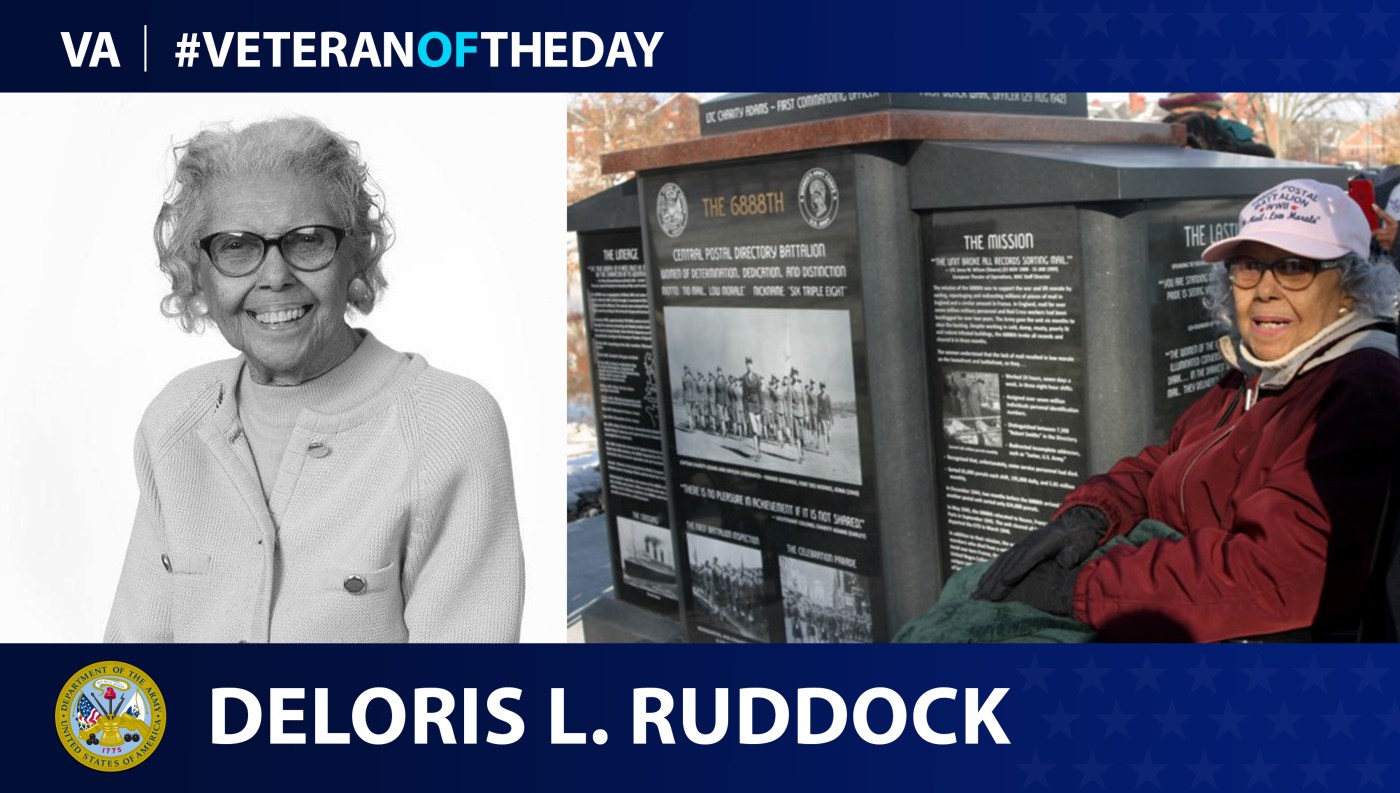 Deloris L. Ruddock spent the 73 years after her military service in relative anonymity. Not even her daughter, Patricia, knew much about her service during World War II in England and France. Ruddock was one of 855 African American women who served in the Women’s Army Corps (WACs) during the war. Officially known as the 6888th Central Postal Directory Battalion, the women called themselves the “Six Triple Eight” with the motto “No Mail, Low Morale.”

Ruddock was born Sept. 16, 1923 in Washington D.C. She enlisted in 1943 into the Women’s Army Corps and trained at Fort Des Moines, Iowa. Her first duty assignment was as a supply clerk at Muskogee Army Airfield in Oklahoma. About a year later, she wanted to go overseas and served with the 6888th.

Led by the highest-ranking black female commander in World War II, Maj. Charity Adams, the mission of the “Six Triple Eight” was to clear the two-year backlog of mail stuffed to the ceilings in warehouses in Birmingham, England. Arriving on Feb. 12, 1945, the women learned of their mission the same day they laid eyes upon the mail. They received six months to complete the job; they did it in three, working round the clock in three shifts.

“The warehouses were cold, dark, and damp with covering over the windows,” Ruddock said.

After clearing the mail in England, the unit deployed to Rouen, France, shortly after V-E Day where they cleared another huge backlog of troop mail. During their service, the “Six Triple Eight” processed for delivery over 17 million pieces of mail. In 2019, then-Secretary of the Army Mark Esper awarded the “Six Triple Eight” a Meritorious Unit Commendation. In 2021, Sen. Jerry Moran of Kansas submitted legislation for the unit to receive the Congressional Gold Medal, the nation’s highest civilian award.

As the women of the 6888th Central Postal Directory Battalion returned from war in 1946, they were discharged at Fort Dix, N.J.  Ruddock used her GI Bill benefits to get a degree from the Traphagen School of Fashion in New York City. Unable to find work in that field, she eventually applied for a job at what is now Citicorp Bank and worked there for over 20 years. After retiring from the bank, she worked for Neiman-Marcus. She later returned to Washington, D.C., to be near her family and attended National City Christian Church. She drove herself to Sunday School and church every Sunday, working in the food pantry until 2020.

On April 20, 2021, Ruddock, 97, was laid to rest at Baltimore National Cemetery with full military honors provided by the Maryland National Guard. VA Secretary Denis McDonough and Moran spoke at the committal service.  After his remarks, McDonough presented Patricia with a Presidential Memorial Certificate.

Please visit Ruddock’s page on the Veterans Legacy Memorial website to post a tribute in her honor: https://www.vlm.cem.va.gov/0802/DELORISLOUISERUDDOCK/9c98df/