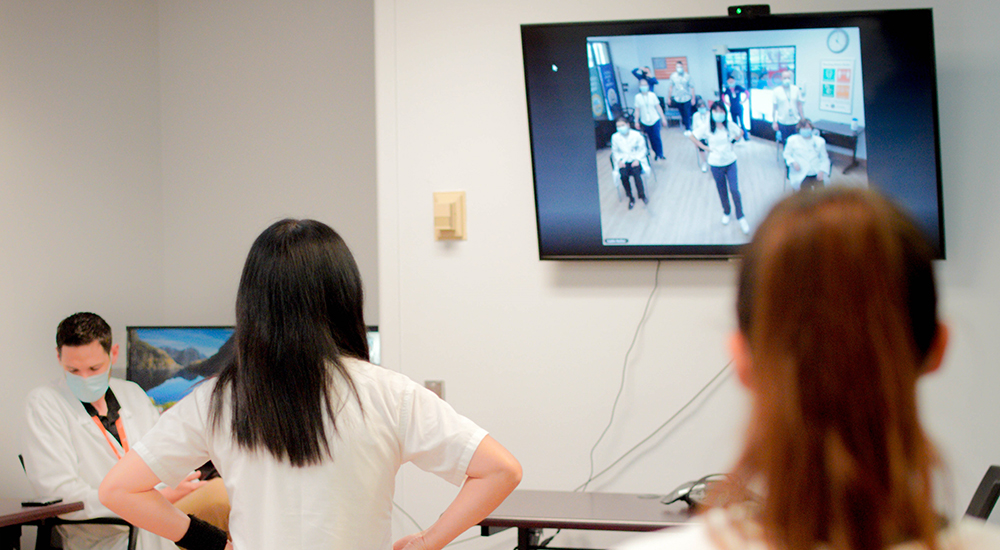 It’s been proven time and again that exercise is good for seniors’ physical and mental health. Regular exercise, even in small amounts, can improve mood, relieve stress, and improve health. Exercise programs have demonstrated to be an effective tool to prevent functional and cognitive decline during aging.

VA sent a proposal for staff to think outside the box to utilize available space and resources to help in the reconditioning of our Veteran residents at the Community Living Centers (CLC) who cannot regularly get out and be physically active.

The pilot program, “Hallway Mind and Body activities,” was hosted by CLC staff at Northport VA and presented virtually to over 200 VA staff nation-wide.

Northport’s CLC staff proposed a team approach. It included medical providers and various staff that use the CLC hallways. The proposal also divides residents into two functional groups. In addition, the two functional groups were divided into 10-to-15-minute activity sessions.

This new way of thinking has caused caregivers to go beyond the myths of exercise for the elderly. As a result, the restorative emphasis encourages staff to minimize resident dependence and maximize their functional abilities.

“Hallway Mind and Body activities” was presented virtually to over 200 VA staff nationwide.

Health and fitness programs are increasingly recognized as vital ingredients in restoring functional ability and in ultimately improving residents’ quality of life.

Body weakness can also contribute to accidents with falls being a prime example. Many elderly patients are limited not because of any disease or cognitive impairment but because of muscle weakness.

“This program uses various exercise programs to make these residents’ bodies stronger and more flexible, helping to facilitate their independence. Northport has seen improvement in flexibility and muscle tone in Veterans – and in one Veteran, improvement in hand contractures since starting this program,” said Dr. Sabahat Mahmood.

Elderly benefit most from fitness programs

“Exercise is a prime example of preventative care, helping residents become better equipped to fight disease and infirmity,” Mahmood added. “Indeed, because of their many health challenges, it is the elderly who can benefit the most from fitness programs.”

All parts of the body that have a function, if used in moderation, and are exercised as is accustomed, become healthy and well-developed.

“If unused and left idle, they become liable to disease, defective in growth and age quickly. This is especially so with joints and ligaments if one does not use them.” said nurse Maggie Dai.

Psychological challenges, such as frustration, loneliness and hopelessness are important ones to address through programming interventions. Exercise has been shown to alleviate these problems by channeling residents’ energies into healthy and productive activity.

Contributes to feeling of togetherness

Participating in a health and fitness group helps to promote socialization and contributes to a feeling of togetherness. Residents at Northport found that anxiety was reduced and tension was relieved as a result of this program exercise.

Veterans had great improvements in fitness and experienced favorable changes in body image, mood and attitudes. In increasing the delivery of oxygen to the brain, exercise has also been effective in combating resident depression. Sessions are currently held weekly.

“The feedback from Veterans is they are excited to participate in these weekly events.” said Mahmood.

Chad E. Cooper is a public affairs officer for the Northport VA.