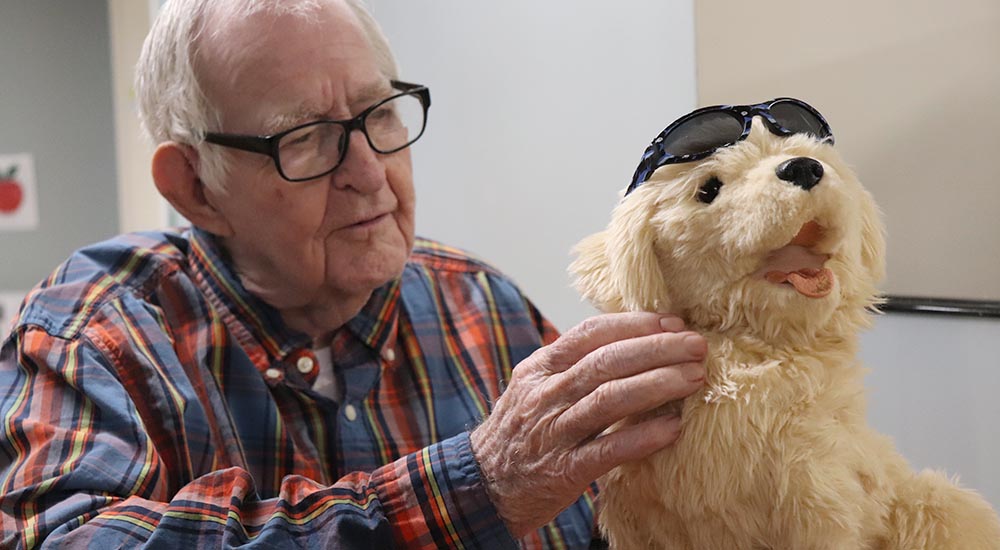 Seventy years ago on the infamous Heartbreak Ridge in Korea, Myron Harold couldn’t have imagined a future where furry robots would provide comfort and healing for elderly Veterans. The Army staff sergeant, weary and injured and frostbit, was taken to a field hospital where both his legs were nearly amputated.

In an interview later in life, Harold said the saving of his legs was “my miracle.” He made it back to his unit and finished another 18 months of combat.

After his tour, Harold (pictured above) ran a fruit business raising and selling apples and peaches. Now, Harold is 90 and lives in the Community Living Center of the Salem VA Health Care System’s Medical Center in Virginia.

He sits in a hallway, smiling and petting a small, golden-furred puppy. The dog is a robot he’s named Peaches. It was one of several cats and dogs given to the Salem VA in 2020 as a first-of-its-kind program through the American Red Cross.

According to Georgine Gulotta, nurse manager, the animals are a wonderful addition to the facility.

“For more than a year now, many of the people here haven’t been able to visit with their loved-ones in person,” Gulotta said. “Some of them have created very meaningful connections with their robot pets.”

The pets can be petted, combed and even washed. They have grooming aids and become the pet of a single Veteran who will often give them a name and treat them like any living pet.

“It takes them back to a happy time, a comforting time,” Gulotta added. “It’s an ideal thing for residents and patients, especially lonely people who don’t have visitors.”

Watch the realistic movements of the robot dogs.

More valuable than many imagine

The program was inspired by a doctor at the Salem VAMC and made possible through the generosity of Gene Rose, a Red Cross volunteer who was working in conjunction with Red Cross Service to the Armed Forces manager, Patti Wilson.

Rose deployed with the Red Cross to Iraq and Afghanistan in 2009 to provide services to military members, and according to Christy Carneal of the Red Cross Virginia Region, wanted to do something for the military programs.

“We were able to make his idea happen because of Gene’s desire to help,” Rose said. “Gene purchased robotic cats on behalf of the American Red Cross for Salem. After that donation, we have also provided dogs as well as a pet care cart that has bed rolls, blankets, collars, leashes and brushes that patients can use to care for their pets.”

Carneal said ARC is excited about the interaction and comfort the therapy pets bring to the patients, especially during COVID when so many are experiencing increased isolation.

“Any program like this is just invaluable, more than people could ever imagine,” Gulotta concluded.

Disclaimer: The sharing of any non-VA information does not constitute an endorsement of products or services on the part of VA.

Rosaire Bushey is a public affairs officer for the Salem VA HCS.