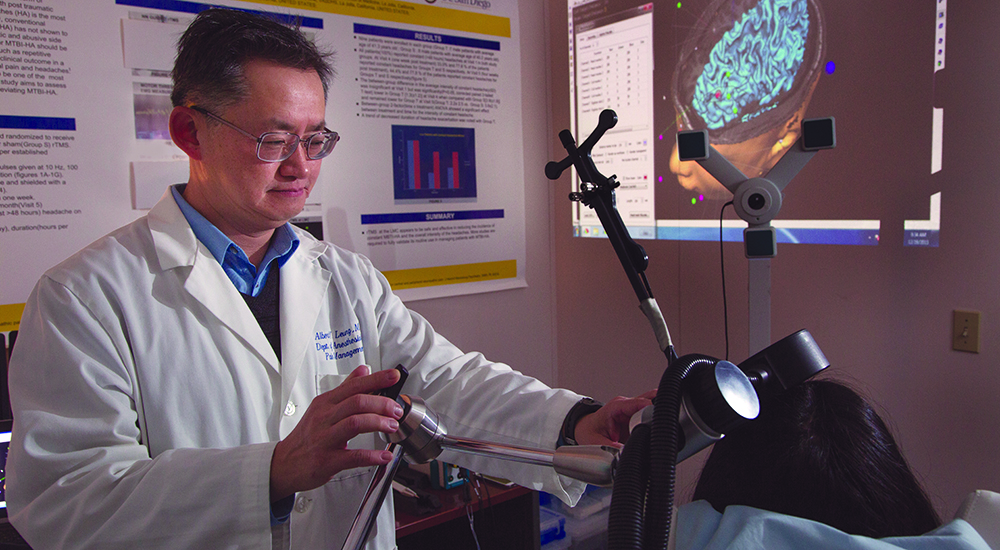 VA researchers have been experimenting with brain stimulation to treat Veterans with brain injuries or mental health conditions such as PTSD. The therapies, most of which are non-invasive, involve activating or calming areas of the brain with electrical, magnetic, or light stimulation.

Repetitive transcranial magnetic stimulation uses large magnetic coils that consist of a wire wrapped around a solid core. They are positioned just above the scalp over the desired stimulation area.

A stimulation machine causes the current in the coils to change direction in microseconds, producing fast and repetitive electromagnetic pulses. These pulses form a strong electrical current in brain cells.

The changes in the brain last longer than those induced by standard TMS.

Scientists may stimulate up to two brain regions

The treatment is approved by the Food and Drug Administration for cases of major depression that don’t respond to other treatments. Brain stimulation for brain injuries and PTSD is not yet FDA-approved.

Leung and his team are now recruiting active and retired military personnel who are experiencing chronic persistent headaches from mild TBI. The researchers are gauging the ability of rTMS to ease these headaches by stimulating the brain’s motor cortex and-or dorsolateral prefrontal cortex.

An MRI (magnetic resonance imaging) will serve as a map for the rTMS treatment. Long-term follow-up evaluations of each patient will be at three months. Leung and his colleagues have demonstrated the short-term efficacy of the treatment of one to two months in prior randomized controlled studies.

Results expected by end of 2023

The motor cortex is part of the cerebral cortex. It helps with voluntary movements. The dorsolateral prefrontal cortex, in the frontal lobes, is linked with memory and attention.

The anticipated enrollment for the double-blinded study is 128 Veterans, 64 per group. One group will get rTMS, the other a sham treatment. Leung hopes to have results by the end of 2023.

Traumatic brain injury is the signature injury from the post-9/11 conflicts in Iraq and Afghanistan. The Department of Defense and the Veterans Brain Injury Center estimate that 22 percent of combat casualties from Iraq and Afghanistan involve TBIs, most of which are mild in severity.

Mild traumatic brain injury is a leading cause of chronic health problems in Veterans, active-duty service members and civilians.

In most people with mild TBI, symptoms resolve within days after an injury. But they can persist for months or longer.

Few treatments are available, partly because the pathology of the chronic effects isn’t fully understood. The efficacy of pain management drugs is limited, and pain killers have many untoward side effects and abusive potential.

Scientists like Leung are thus turning to brain stimulation techniques to treat headaches and other symptoms.

Leung is the director of the Center for Pain and Headache Research at VA San Diego, which is using transcranial magnetic stimulation as an off-label treatment so patients can come off opioids and other mind-altering pain drugs.