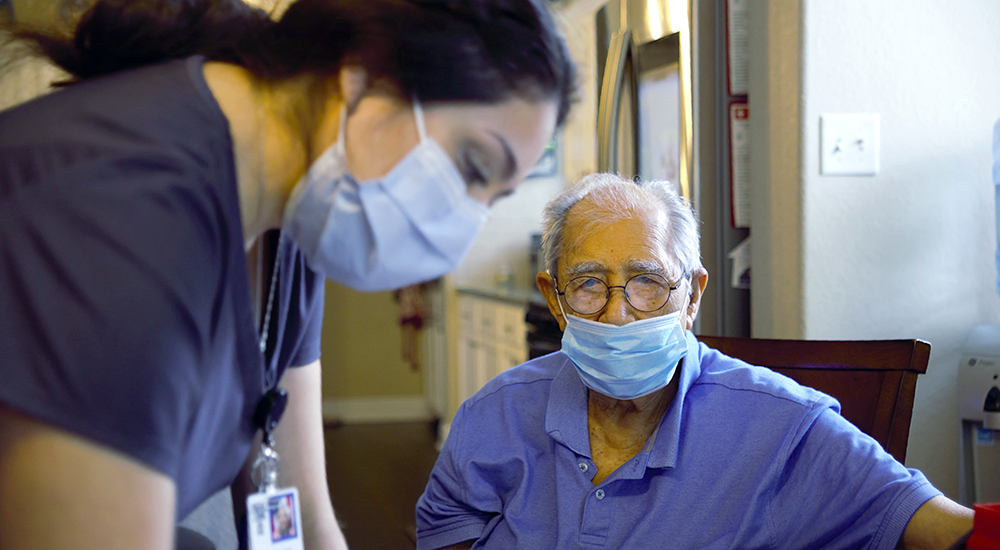 Several VA providers huddled in front of a home in a gated San Antonio community. An unusual scene unfolded, since there was no VA facility nearby. It isn’t your average home, either. The providers were greeted at the front door with temperature readings, COVID-19 screening and a shot of hand sanitizer.

This scene plays out daily across South Texas as part of a little-known program called VA Medical Foster Homes (MFH).

MFH is an alternative to placing Veterans in nursing homes. Most are candidates because they cannot live independently. The homes are chosen by the Veteran from a list of homes that meet a nursing home level of care.

The program relies on military and non-military caregivers to open their homes to the Veterans to provide them a safe, family-like atmosphere.

He likes the care he receives because the medical team comes to the home to do evaluations and other patient care which makes it easier on him and more efficient for VA.

Flexibility a positive aspect of the program

After a few falls, one Veteran’s family knew it was time to look for other arrangements.

“The medicines I was taking made me fall three times, and I was living with my daughter at that time,” said Raymond Flores.

After a short stay in the hospital, he left for rehab and contacted VA for assistance. He was originally placed with a family who never served in the military and it didn’t work out.

Nurse Maria Wallace and World War II Veteran Raymond Flores. He likes the care he receives because the medical team comes to the home which makes it easier on him and more efficient for VA.

That flexibility is another positive aspect of the program. Just like the Veteran-centric nature of VA health care, the program looks for the best fit for the Veteran to ensure they are comfortable and their needs are being met.

Some of Flores’ family came for a visit on this day, picking him up for a trip after his yoga session. His granddaughter Francesca Flores says she sees a difference in him since he has been at the Hernandez house.

“He’s happy,” she said. “I feel like he likes it a lot. He can be independent, he likes the openness, and it’s in a family setting.”

Flores’ daughter-in-law, Diana Flores, says she is happy that the house is beautiful and secure. Something you look for in a home.

“It’s like coming to his house to visit,” Diana said. “I know he’s well taken care of, he’s well fed, he has his own room, the bus picks him up right up front. He loves it and he’s always happy and likes the guys that are here.”

Diana says he has everything he needs

That is exactly why Flores, a World War II Veteran, likes living with his caregivers, Genaro Hernandez and Alice Terry.

“I told VA I wanted to be closer to my family, and I moved to the Hernandez household,” Flores said. “I like everything about living here. The main thing is that he takes care of me. VA sends nurses, doctors and my medications here. I get the service. He is doing a good job of taking care of my health.”

Caregivers must have the knowledge and time to make the commitment

“Education begins with caregivers during the first telephone contact,” said Director Sherraine Gilman. “My goal during the conversation is to not only evaluate whether they might be a good fit for our program, but ensure they have the knowledge and time to make the commitment to our Veterans.”

The Hernandez household was a good fit, as he recently hung up his beret after 21 years of service and put on his caregiver hat, something he said was natural for him.

“It worked out really well for me” Hernandez said. “I can relate because it is a Veteran’s program. Because I was coming out of the military, I wanted to find something that I felt like I was still giving back in some way, shape or form.”

Phillips arranged chairs in the living room, then got to work stretching and challenging Flores and the two other Veterans that live in the household, Donald Pardo and Dong Kim.

After their morning workout, the other VA staff got to work, drawing labs and doing interviews with their patients.

“VA’s success is my success.”

Social worker Beatrice Bejarano is even getting a shadowbox together for Flores to add to his collection of military regalia in his private room. Each Veteran has their own room in a medical foster home setting.

“In 1999, when VA launched Medical Foster Homes, the cost of nursing home care was $500 a day,” said Gilman. “The average daily cost of a foster home was $60 per day, which resulted in cost savings to VA.”

Although Gilman is happy with the cost savings, her real joy is the work.

“I love what I do and where I do it,” said Gilman. “As a Veteran, I am invested in the reputation and care that VA provides. VA’s success is my success.”

Steven Goetsch is a public affairs specialist for the South Texas VA.