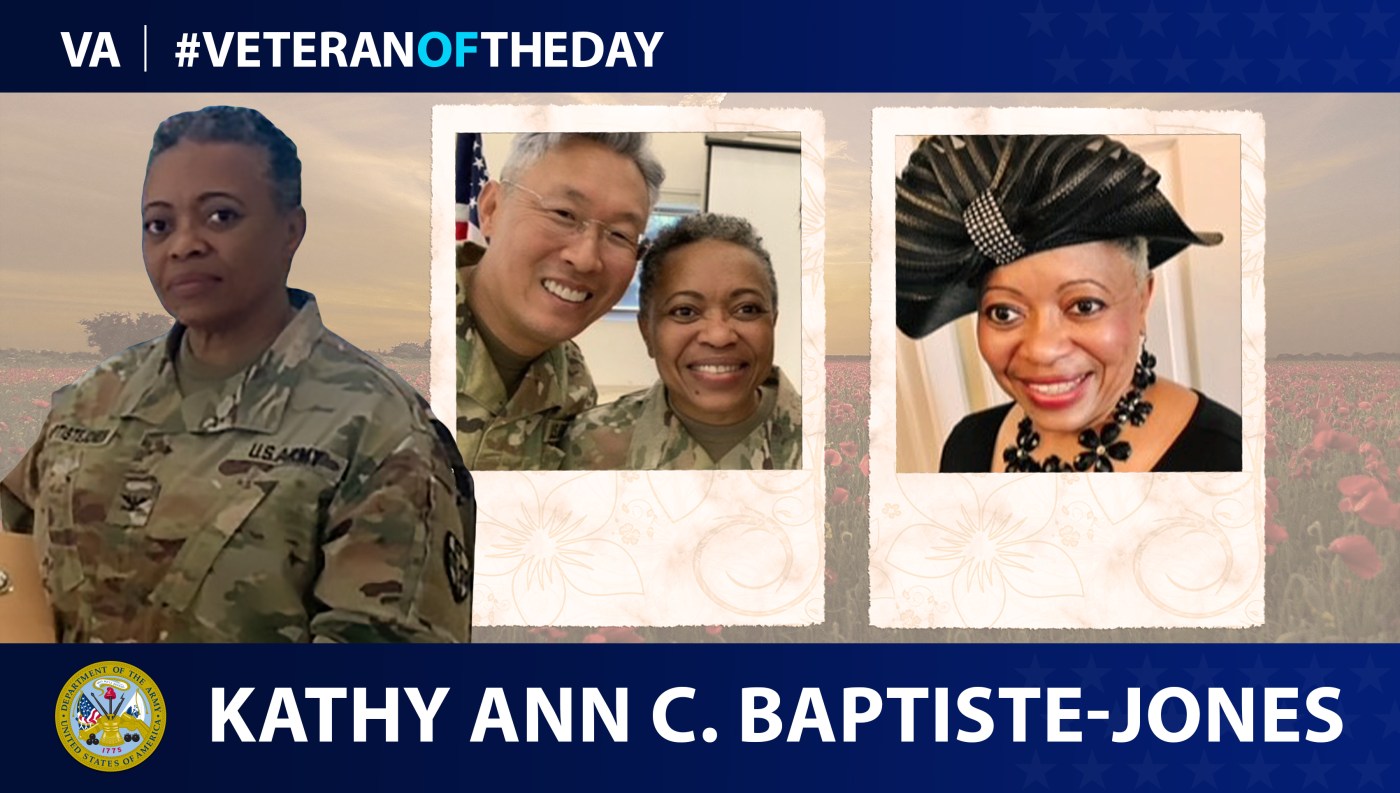 Kathy Ann C. Baptiste-Jones was born in Port of Spain, Trinidad, West Indies, and grew up in St. Croix, U.S. Virgin Islands. Her four brothers all served in the military, and she wanted to serve as well. After receiving her bachelor’s degree in nursing from Indiana University, Baptiste-Jones commissioned as a second lieutenant in 1990.

Following basic training at Fort Sam Houston, Texas, Baptiste-Jones took on additional courses in nursing and leadership. Her first assignment was the 337th Army Hospital in Indianapolis where she worked as a surgical nurse and medical instructor. After two years, Baptiste-Jones transferred to the 73rd Field Hospital in Fort Benning, Georgia, and served as a personnel officer in addition to her other responsibilities. She also worked with the Atlanta VA Medical Center in primary care and in supporting the Nurse Network Center’s mission to improve VA patient care.

In 2005, Baptiste-Jones was mobilized in support of Operations Iraqi and Enduring Freedom and went to Fort Carson, Colorado, where she became the head nurse of the Troop Medical Clinic. She also worked with the 5502nd Army Hospital in Colorado Springs as a clinical coordinator, collaborating with the various departments and serving as a mentor for team members. In August 2011, Baptiste-Jones joined the 364th Civil Affairs Brigade. Civil affairs partners with local communities and civil authorities around the world to reduce the root causes of instability, enable local governments and improve the quality of life for civilians caught in crisis zones. They also help educate Army commanders on the needs, vulnerabilities and complexities of civilian populations abroad.

Baptiste-Jones said she moved to civil affairs because she wanted to broaden her horizon as an Army nurse and move into the area of public health, coordinating health care on a larger scale while working with multiple entities to plan, coordinate and execute Civil Affairs operations. She became instrumental in the framework and creation of the 440th Civil Affairs Battalion at Fort Carson. After transitioning to the Army Reserve, she joined the Civil Affairs Command, where she served numerous functions such as the public affairs chief for Rim of the Pacific Exercise (RIMPAC) 2018.  RIMPAC is the world’s largest international maritime warfare exercise that includes the naval forces of 21 countries. In January 2019, Baptiste-Jones served with the 7305th Medical Training Support Battalion. She worked as a senior observer coach trainer, assisting with field training during exercises held at Fort Hunter Liggett, California.

Baptiste-Jones retired from the Army in February 2020 as a colonel. She received many awards, including the Army Commendation Medal and Army Service Ribbon.