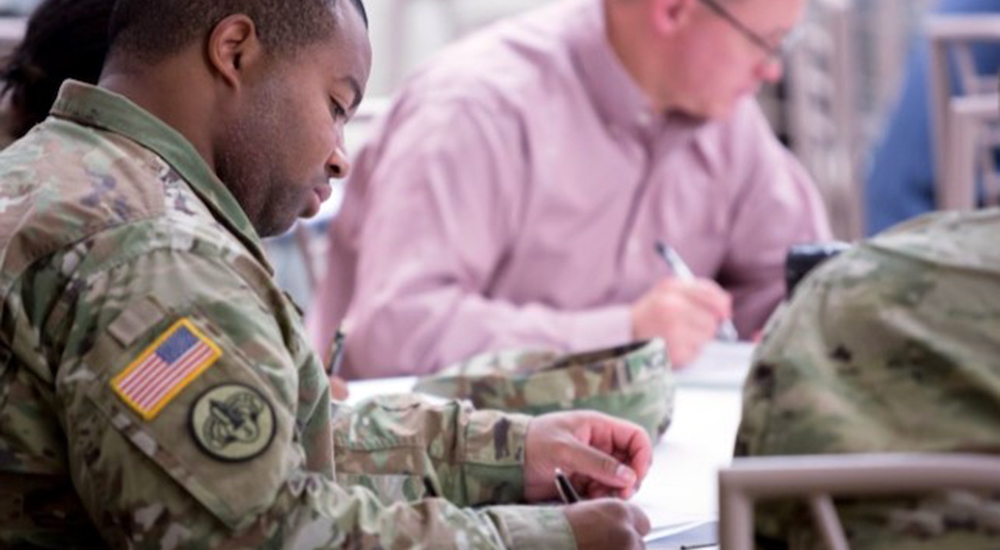 VA partnered with Salesforce, Inc. in 2020 and has since collaborated to develop a free online training about VA benefits for Veterans.

Salesforce’s training helped me realize I could use in the tech industry the skills I cultivated during military service. I want to help other military personnel do the same.

This is my story

Growing up as an Army brat, I knew that military service was what I was born to do. I followed in my father’s and grandfather’s footsteps and became an infantry officer in the U.S. Army.

After in-depth schooling and training, I thought I was prepared for all the possibilities of combat. On July 28, 2003, I realized how wrong I was.

We were driving through east Baghdad to our brigade headquarters for a coordination meeting. Suddenly, there was an explosion that rocked our vehicle and filled it with dust. Immediately after, I felt a massive concussion go through my body.

My teammates and I were all injured in the aftermath, and tragically, our driver, Specialist William (Bill) J. Maher, didn’t survive.

After he passed, Maher was one of the reasons I began training future officers to be mentally and professionally prepared to lead other soldiers. I think of my responsibility to continue to serve and honor him, as well as the rest of the men and women in the military community.

After I transitioned out of the military, my focus became helping other military community members transition out of service to find meaningful careers, as I did with Salesforce.

Salesforce Military helps Veterans reskill and upskill. I help soon-to-be-discharged soldiers who are nervous about finding employment after service. I also help Veterans who are struggling through a career change – their new call of duty.

Through the Salesforce Talent Alliance, an initiative that connects employers to Salesforce candidates, we bring new talent for customers and partner companies to grow, strengthen and diversify their workforces.

VA’s partnership with Salesforce Military helps offer Veterans a competitive edge in the workforce. That’s critical to their well-being as they transition from military service into civilian life.

Access to meaningful employment is also a social determinant of health that can decrease suicide risk.

VA supports Veterans like Crain who have experienced trauma – such as traumatic brain injury (TBI) or posttraumatic stress disorder (PTSD) – through its National Center for PTSD and VA’s Office of Research & Development’s research into TBI.

Other VA partnerships such as the one with the Daniel and Salvador Montoya Heroes Foundation also helps match Veterans to Veteran-friendly companies, to provide them with employment opportunities.

Learn more about VHA partnerships by visiting the VHA National Center for Healthcare Advancement and Partnerships website at va.gov/healthpartnerships.