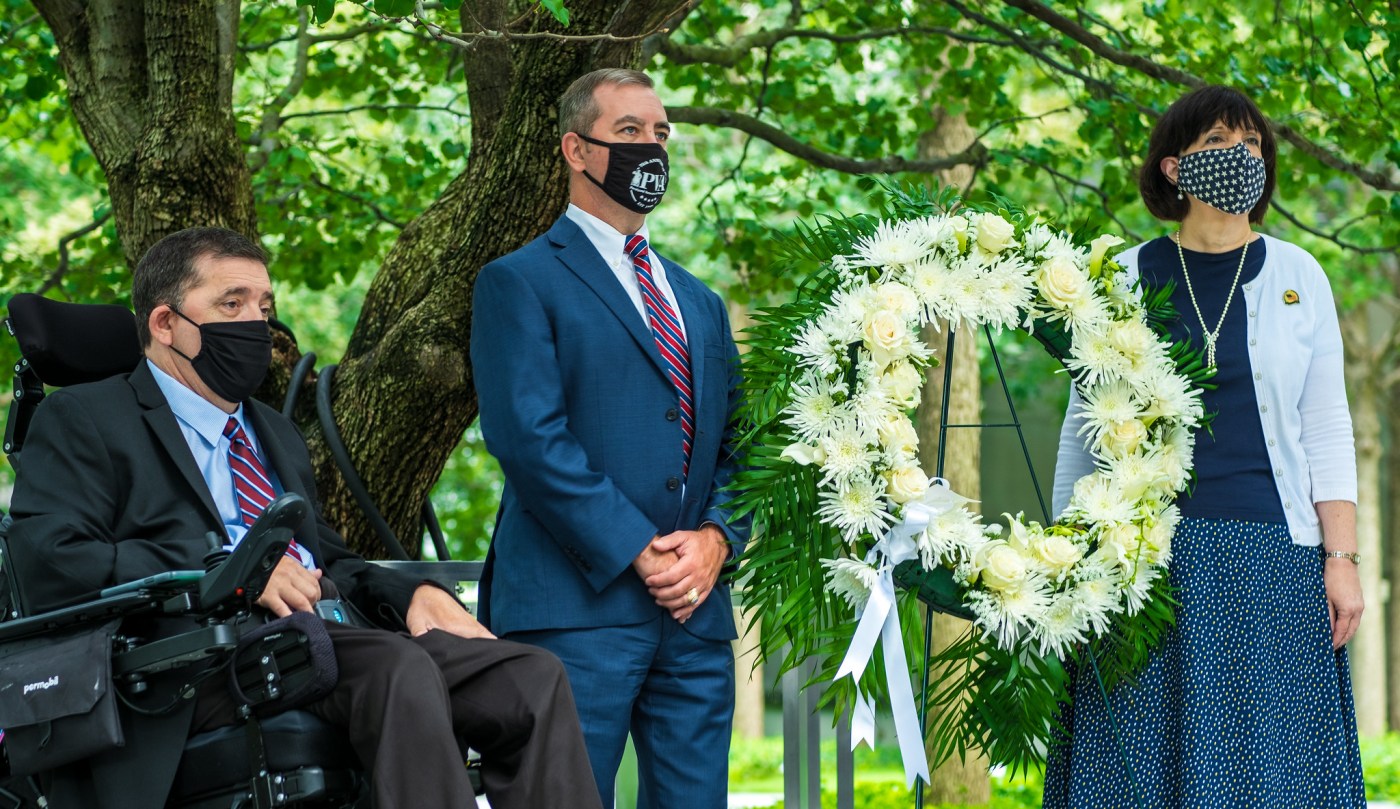 Twenty years ago, terrorists hijacked two commercial jets and flew them into the Twin Towers in New York City, knocking both buildings down. In two other hijackings that day, terrorists crashed one plane into the Pentagon outside Washington and another into a field near Shanksville, Pennsylvania.

Last week, Veterans took a break from the 40th National Veterans Wheelchair Games in New York City to visit the 9/11 Memorial & Museum where the Twin Towers once stood. The Veterans viewed exhibitions and artifacts that tell the story of the attacks. Some went to the top of One World Trade Center, also known as the Freedom Tower. The nearly 1,800-foot high skyscraper opened in 2014 on the site of the rebuilt World Trade Center complex in lower Manhattan.

`This hit me hard’

Emotions ran high among the Veterans. Brian Conwell, who served in the Army from 2008 to 2010 during the post-9/11 conflict in Iraq, broke down while touring the site.

“This hit me hard,” he said. “I’ve lost a lot of friends who signed up to serve following the attacks. I know a lot of people who joined because of this and never came home. It’s surreal.”

Fellow Army Veteran Fred Samlin served in Vietnam in the late-1960s. He became choked up when flashing back to the horror he saw on television as one of the hijacked planes slammed into the South tower at the World Trade Center, minutes after the first jet hit the North tower. He was working at a high school in Concord, North Carolina at the time.

`They didn’t make it out’

“I just got on my knees and started praying,” Samlin said. “I know 58,000 Americans died in the Vietnam War. But we could fight back. These people were just going to work. They had no idea that rescuers were coming to help. They didn’t make it out.”

Air Force Veteran James Hawks found his trip to the 9/11 memorial “quite sobering.” The visit also reminded him that his father once worked for Pittsburgh Plate Glass, a company that made the glass used in the construction of the Twin Towers. Hawks said his father drove trucks from Pittsburgh to the site where the towers were being built 50 years ago.

“I knew how they built [the Twin Towers] and watched them fall,” he remembered. “So the whole thing went full circle for me.”

`It caught us off guard’

During the 9/11 visit, Army Veteran Ronald Richardson wore a hat emblazoned with the words “Bronze Star.” He earned that medal for serving in Operation Desert Storm from 1990 to 1991.

When watching the Twin Towers fall, Richardson recalled thinking, “Oh my gosh.” He added: “It was totally unnecessary for all of those people to die. We should have had a better plan in place to detect the terrorist attack. It caught us off guard.”

Vet Center counselors and outreach staff, many of whom are Veterans themselves, are experienced and prepared to discuss the tragedies of war, loss, grief and transition after trauma.