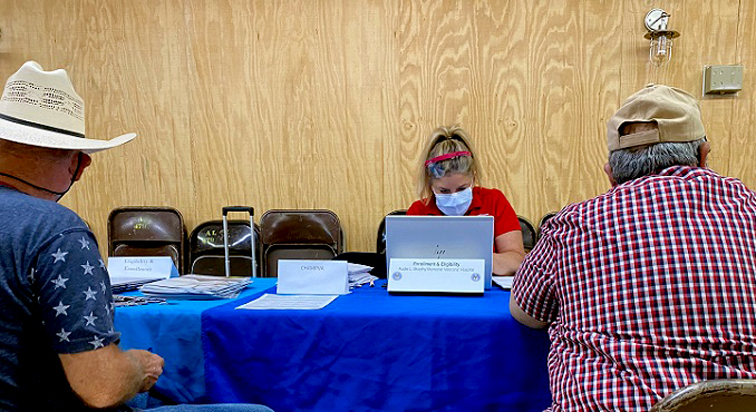 A non-descript building, 85 miles west of San Antonio, is the home of the American Legion Post 479. It was also host to the Uvalde Veterans Information Fair held in July in Uvalde, Texas.

The South Texas Veterans Health Care System sent a caravan of services to the fair.

It was an effort to improve the Veteran experience for Texas rural Veterans by bringing much needed information, and even more, face-to-face interactions, which have been on a long hiatus since the COVID outbreak.

“I am glad we conduct outreach because Veterans feel more comfortable when they receive the one-on-one care,” said Joanna Sierra, enrollment and eligibility supervisor.

Sierra realized the benefits of face-to-face contact immediately. Two military sexual trauma (MST) victims opened up to her and broke down at the table when she asked how the VA was meeting their mental health needs.

She contacted the MST coordinator who reached out to the Veterans right away to discuss treatment plans so they could begin their healing journeys.

Another rural Veteran, 87-year-old Richard Cuellar, a Veteran of the Korean and Vietnam wars, came to the fair because he was having issues with his medications.

“My provider takes good care of me,” he said. He couldn’t get a hold of her to straighten out his medications because she was sick. He said she has been treating him for a while and knows more about him than he knows about himself.

Patient Advocate Darnetta Brown researched through the patient database and found out the scripts just needed to be reordered. A quick phone call to a provider and pharmacy and the scripts were set to be delivered in a few business days.

The 82nd Airborne Division Vet shared his stories and concerns with the advocates and left with a mug, an updated prescription order and of course a big smile.

Although he likes his health care, he said one of his biggest challenges being a rural Veteran is transportation. Besides the cost, the transportation van leaves at 3 a.m. and that is too difficult for him to manage.

Navy Veteran Angelina Moore said her biggest challenge is being too far from the information.

She came hoping to find answers to several questions she had about her care and services.

“I think the toughest thing about living in a rural community as a Veteran is not knowing who to talk to and where to go for help,” Moore said. “If I need help with something, I have to go all the way to the VA hospital, because that is where my insurance is and that is where I am covered.”

Moore was excited about the opportunity to meet VA staff and tried recruiting every Vet she saw on the street, even one elderly Veteran who is a family friend.

“My neighbor, he is old, and since I’m computer savvy, I give him printouts, called him, and even knocked on his door,” she said.

Moore saw the number of services and figured she could get some of her issues resolved.

“I came here and totally took care of everything that was in my brain,” she added.

Cuellar and Moore were part of a steady flow of Veterans coming in and utilizing the variety of services available.

Enrollment and eligibility and Veterans’ benefits had lines forming at their tables.

Veterans were not the only attendees at the information fair. Civilian healthcare agencies stopped in to learn more about VA services. Family members looking to be caregivers queried staff on what their first steps should be.

Some of the issues that Moore and Cuellar were having is why Congress established the Office of Rural Health in 2006. They look at the problems these Veterans experience and use it to develop new care models.

Moore added that she just doesn’t want to go all the way to San Antonio for some of the smaller stuff because she already goes a couple times a week for bloodwork. She was happy with the fair because she normally doesn’t have anyone local to talk to. Sierra became that person to talk to and found the outreach very beneficial.

“A few Veterans didn’t think the VA provided medical care, they thought it was strictly administrative,” she said.

She received all kinds of questions and found out there were many misconceptions about the VA.

“Female Veterans did not realize they were eligible for military sexual trauma care, while other Veterans thought getting VA care would interfere with their private insurance,” she said.

Moore knows the reason the VA wants to reach out to those rural areas of America.

“We have a lot of Veterans out here,” Moore said. “I literally had 25 students in my class that all joined the military. Many return to their hometowns after service.”

These 25 new Veterans in Uvalde are a small fraction of the 5 million Veterans who reside in rural communities.

By Steven Goetsch is a public affairs specialist for the South Texas Veterans Health Care System.