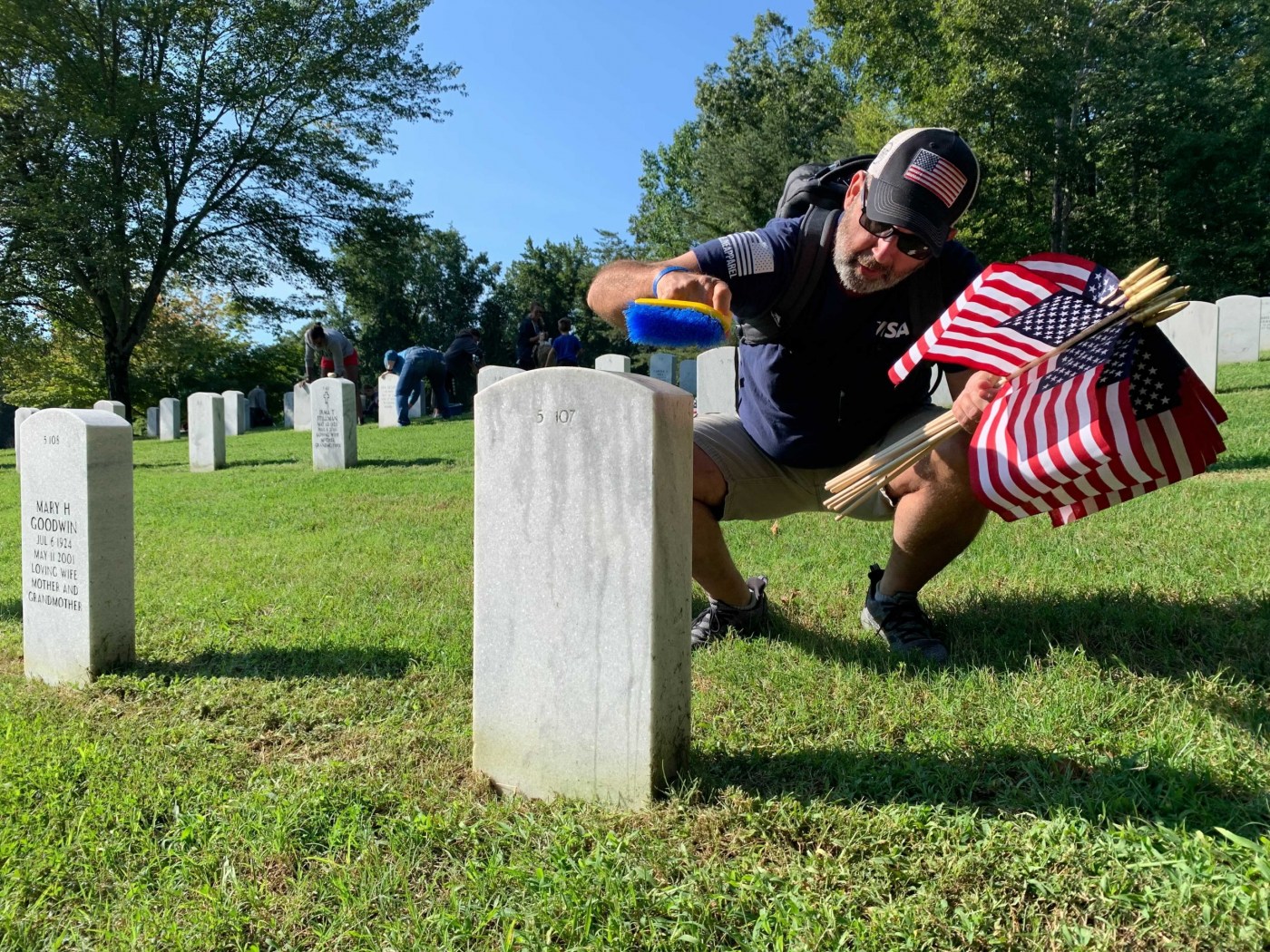 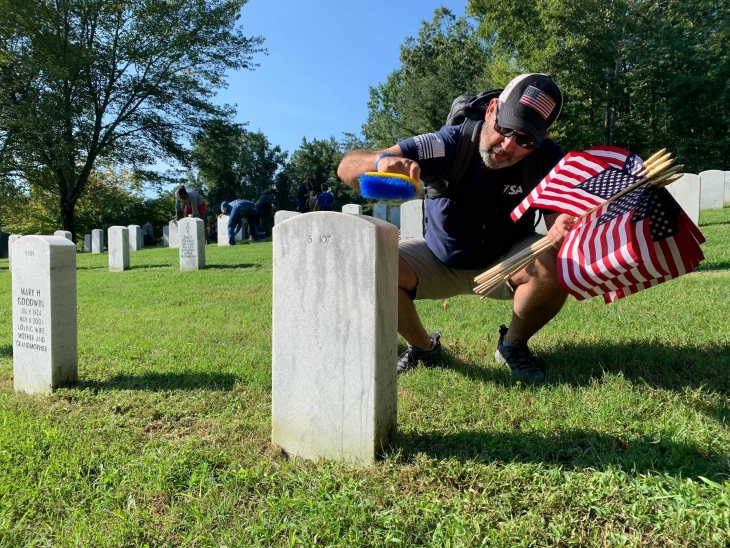 A volunteer cleans a headstone at Quantico National Cemetery in Virginia Sept. 10, 2021.

Volunteers from across the U.S. gathered in 65 VA national cemeteries for a National Day of Service on Sept. 10.

The secretary hailed people who streamed into the wreckage, including policemen, firefighters, coworkers, Veterans and active duty military, calling them “heroes.”

“There is no way to bring back those we lost that day, or those who died in the post 9/11-wars – no more than we can undo what happened that morning,” he said. “All we can do is honor them. Remember them.”

Joining McDonough was Max Stier, president and CEO of the Partnership for Public Service. He was in the U.S. Capitol Sept. 11 when a Congressman told his group a plane hit the World Trade Center. Moments later, U.S. Capitol Police evacuated the building.

“What I could not know and did not realize until a fair bit afterward is that I was alive because of 33 people and a bunch of people who were working on an airplane that was flying over Pennsylvania did something to bring that airplane down and to save a lot of lives, including my own,” Stier said.

Stier then pointed behind him to the headstone of Navy Veteran Jamie Lynn Fallon, who worked at the Navy’s command center at the Pentagon and died on Sept. 11 when Flight 77 hit the building.

“All I can say is I’m deeply grateful for the people who did an extraordinary thing on the plane that day and for all of those who served our nation then and now to keep us safe and to make our country great,” he said.

The secretary urged volunteers to leave tributes at the Veterans Legacy Memorial, an online platform to find Veterans buried in national cemeteries.

“It’s a special thing, to have a place to send messages to those who are no longer with us,” he said.

The secretary added that there’s one message from 9/11 that has always stayed with him. He recited the voicemail that Brian Sweeney, a pilot in the Navy and passenger on United Flight 175, left for his wife, Julie, just before his plane hit the World Trade Center.

“Jules, this is Brian. Listen, I’m on an airplane that’s been hijacked. If things don’t go well, and it’s not looking good, I just want you to know I absolutely love you. I want you to do good, go have good times. Same to my parents and everybody, and I just totally love you, and I’ll see you when you get there.”

McDonough said it’s important to remember the “individual humanity” of the 2,977 killed that day, especially as the years wear on.

“They’re us,” he said. “And we owe it to them to not only remember their deaths, but to remember their lives. So when you walk around today and clean the headstones of fallen heroes whom you may or may not know, please do so with that in mind. Remember those we lost 20 years ago, and the lives they hoped to live. And, to quote Brian’s heartbreaking voicemail, tell them you’ll see them when you get there.”

About the National Day of Service