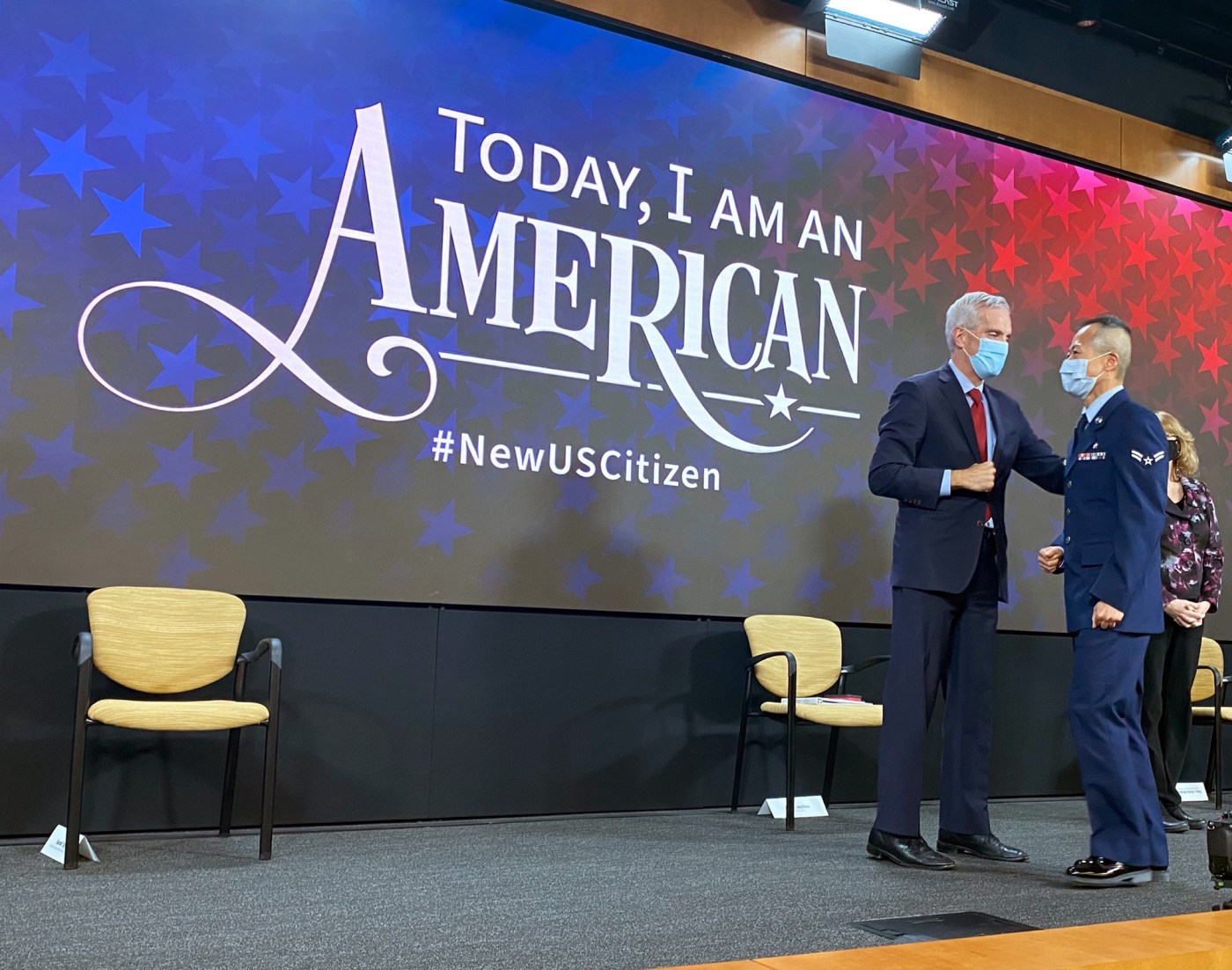 Veterans Day 2021 will be extra special for 12 military members who will celebrate it as U.S. citizens for the first time following a ceremony Nov. 9 at U.S. Citizenship and Immigration Services headquarters in Maryland.

The service members were from the Army, Navy, Air Force and Marine Corps, hailing from 10 different countries. The 12 new U.S. citizens are:

After a short ceremony, the 12 recited the oath of allegiance from U.S. Citizenship and Immigration Services Director Ur. M. Jaddou. They also recited the pledge of allegiance for the first time as U.S. citizens, then heard from VA Secretary Denis McDonough.

“From the beginning of our fight for independence to the end of the longest war in Afghanistan, millions of Veterans have risked their lives to preserve the democratic ideals of this great nation,” McDonough said. “All of us are beneficiaries of the blessings and opportunities their service and sacrifice have provided – that you all have provided – for our nation. That selfless service makes us the world’s leader among nations and helps make America a beacon of hope and freedom around the world, drawing millions of people to our shores and serving as a model of democracy. And those millions of immigrants have contributed immeasurably to the success and development of our country.”

One of the new citizens said becoming a citizen and serving in the military is about giving back and setting a good example.

“Becoming a citizen means so much to me because it puts me in a position to give back to the country,” Vondee said. “I decided to join the Army to advance in my career and to serve this great country. Also, to be a better example to my daughter to let her know she can be anything as long as she puts her mind to it since I joined at a later age.”

One of her fellow new citizens added that he’s thankful for the opportunity.

“Becoming a U.S. citizen is a new and second life to me,” Li said. “I thank the country for accepting me as an alien resident first. We need to pay back our gratitude to make this country better.”

More about the ceremony

The ceremony was at the Tomich Center, named after World War II Veteran Peter Tomich. He was an immigrant from Austria (later Yugoslavia) who joined the Navy and received a Medal of Honor for his actions Dec. 7, 1941. He secured boilers aboard the target ship Utah, helping other men escape safely. He lost his life in the process.

Also as part of the ceremony, Army Veteran Viet Xuan Luong received an Outstanding American by Choice recognition. A retired brigadier general, he emigrated from Vietnam in 1975 as a refugee as part of Operation Frequent Wind. He earned a commission via the Army Reserve Officers’ Training Corps program. Luong was the first Vietnamese-born general in the U.S. military, retiring in June 2021 after 34 years of service.