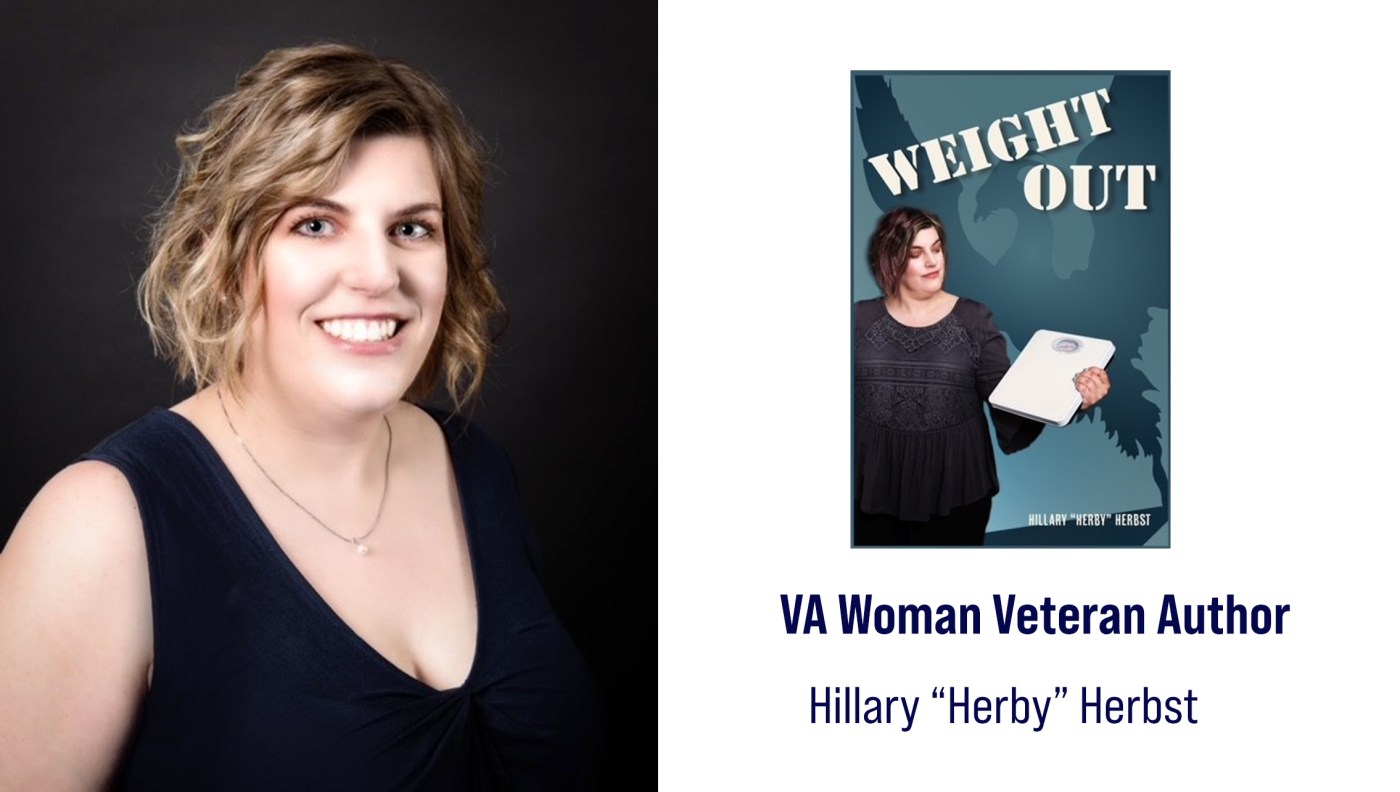 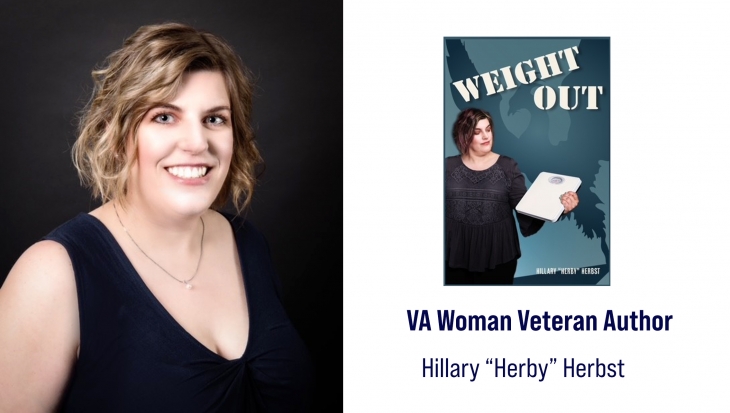 Author and Coast Guard Veteran Hillary Herbst wrote “Weight Out” about her experiences battling through challenges during her service.

This month’s author is Hillary Herbst. At the age of 21, Hillary moved for the first time in her life. She wrote “Weight Out” about her experiences in the Coast Guard. That move was to Cape May, New Jersey for Coast Guard boot camp. Hillary served twelve years in the Coast Guard and planned to retire. Unfortunately, Hillary became ill and gained a lot of weight around the time she turned 30. It took a long time and going outside of the Tricare system to finally be diagnosed with hypothyroidism. It took six more months and an Air Force Endocrinologist to add poly cystic ovary syndrome (PCOS) to Hillary’s medical record along with the hypothyroidism.

Due to the constant battles with Coast Guard medical and admin about her weight, Hillary began therapy in 2016, where she was diagnosed with an anxiety disorder and PTSD. Hillary fought for her career for as long as she could and then eventually learned that her career was killing her. Deciding it would be better for her health Hillary stopped fighting and accepted an honorable discharge for failing to meet Coast Guard weight requirements in April of 2018.

She worked as a civilian instructor at the Coast Guard Training Center in Petaluma for a few months before moving on to being a Quality Assurance Specialist for a transportation company. Once she received her VA benefits, she moved back to Alabama, bought her first house, started her own business, and wrote her two books. Hillary currently resides in Mobile, Alabama, where she spends every day trying to get healthier and help others.

What are you doing now, significant moment(s) during your service and other unique information?

I started my own business in 2019. I started painting and making clocks in 2017 shortly after a vacation and my diagnoses of hypothyroidism and poly cystic ovary syndrome (PCOS). Once I moved back to Alabama, I made it a sole proprietorship. That is also when I wrote my first book. I wrote my second book in 2021. Painting helps with my anxiety and PTSD and going to craft fairs, meeting people, sharing my experiences, hearing theirs, and selling also help me heal.

What was your Military branch, career field, and years of service?

What were your tours, deployments, and campaigns (OIF, OEF, Vietnam, Gulf War, etc.)?

Growing up in Illinois, I did not know much about the Coast Guard at all. I decided to enter the fleet as a non-rate to learn more and decide what I wanted to do. My first station was a small boat station in Sabine Pass, Texas, right after Hurricane Rita hit. I learned very quickly that I get seasick. I also learned that I loved working the radios during search and rescue (SAR) cases. From Texas, I went to A-School in Petaluma, California. From there I went to the Coast Guard Cutter Mellon out of Seattle, Washington. I did five patrols in Alaska and two down in South America. In 2009, I was transferred to Mobile, Alabama, where I finally got to work the radios again. Then as I progressed in rank, I started coordinating the searches. My last station was the Training Center in Petaluma as an instructor from 2014-2018. I also earned master training specialist.

What was your fondest or proudest memory during your military service?

It’s hard to choose just one. I suppose it was the SAR case I wrote about in the chapter “Fame and Fortune” in my book. It was one of my first big cases and all four guys survived. But I was equally as proud of my first class where all 16 students graduated.

What was your inspiration for becoming an author, or writing this book (for instance, a childhood dream, a significant life experience, a person)?

I have always been a writer in some fashion, from keeping diaries to writing poems in high school. I always thought one day I would write a book. I did not expect my book to be what it turned out to be, but I also did not expect my career to end the way it did. Not only did I want to heal, but I also wanted to show how proud I was before I got sick, and to draw attention to and help anyone going through a similar situation to mine.

How has your military experience shaped your creativity or how you express yourself?

I think the military put some things in perspective for me, especially working SAR. I also gained a lot of confidence and can be very assertive when needed. However, creativity is the Yin to that Yang (or vice versa?) and I like being able to just relax, as well.

What advice would you give other women Veterans who may be considering becoming an author?

1) Just go for it. 2) If you are self-publishing, read the guidelines first, so you can set up all your formatting before you start writing verse changing it all when your final manuscript is complete. 3) Hire at least one editor. They do not necessarily have to be a professional editor. A high school English teacher would probably suffice. My editor was a magazine editor. My book was her first book. An editor is not just for spelling and grammar, which now days most computer programs will correct for you. An editor also gives you a different perspective. They let you know what the book sounds like to them. It is especially helpful when you are using military jargon to ensure that civilian readers will understand it.

How do you believe that women Veteran authors can be instrumental in shaping society’s understanding of women Veterans’ military experience and their contributions?

It’s hard for me to speak for all women Veteran authors, but I know for me personally, most people don’t even know the Coast Guard is a branch of the military. Once they learn that, they are surprised to hear about mandatory weigh ins. Everyone assumes you work out a lot—or that you know how to swim—but no one seems to know or think about the weight issue. In general people don’t know what they don’t know. And if we don’t tell our stories, they will never know.

What were some of your obstacles and challenges in writing this book?

I was still healing at the time I wrote my book. I was walking a fine line of wanting to tell my story but not disrespecting the Coast Guard as a whole or conveying in any way that I was not proud of my service. I also wanted to convey that I was a survivor and not a victim. I wanted to help anyone going through something similar to what I went through. I wanted them to know they were not alone and that they had options. A lot of people hurt me. I wanted to tell how I was hurt without gossiping. I wanted to be honest without being boring. I wanted to be vulnerable, but I was scared. These are all reasons to hire an editor.

What are your recommendations for illustrating, book cover selection, and the publishing process?

As said before, I self-published. I would write a chapter, send it to my editor, make changes, and then save the edited chapter. At the end, my editor and I had to compile the final manuscript and then format it. For my second book, I streamlined that process, by creating and formatting the final manuscript after the first edited chapter. I hired Veteran artists who were tech savvy to illustrate each book covers according to the guidelines. I sent them the guidelines ahead of time so that the cover would not be kicked back for technical errors. Ensure your artist also gives you different sizes and formats for social media advertising and posters.

What is one significant thing we should know about you?

I’m broken but beautiful, and my strength is what defines me.

How has writing this book helped you?

Writing about what happened to me helped me process and heal from what happened. I’m also very, very hopeful that I am helping others, as well.

What is your favorite quote?

I have an entire chapter full of my favorite quotes in my second book. But if I had to narrow it down to two, they would be what I wrote above. They are personal mantras I came up with to help heal and promote my business. “Broken but Beautiful” “Strength is Beautiful”

If you could choose one woman from any point in time to share a meal, who would she be?