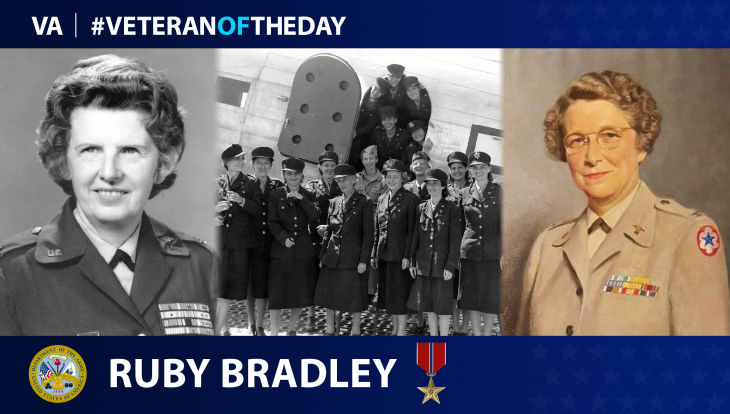 Today’s #VeteranOfTheDay Army Veteran Ruby Bradley, a nurse captured as a prisoner of war in the Philippines during World War II.

Ruby Bradley was born in December 1907 in Spencer, West Virginia. She graduated from college in 1926 to become a teacher and later graduated from the Philadelphia General Hospital School of Nursing in 1933.

In October 1934, Bradley entered the U.S. Army Nurse Corps as a surgical nurse and worked at Walter Reed General Hospital in Washington, D.C.

Bradley relocated outside of the U.S. to a station hospital at Fort Mills on the island of Corregidor in the Philippines in February 1940. In 1941, she was reassigned as head nurse at Camp John Hay on the Philippine island of Luzon.

Three weeks after the attack on Pearl Harbor, a Japanese aircraft struck Camp John Hay. Bradley and her fellow Army nurse Lt. Beatrice Chambers attempted to flee the disaster. Bradley and Chambers found themselves at a logging camp and cared for civilian refugees.

On Dec. 28, 1941, the Japanese Army took Bradley and Chambers prisoner. Initially, the Japanese imprisoned Bradley at an internment camp at Camp John Hay, where over 500 people crowded into one building.

By 1943, Bradley went to the Santo Tomas Internment Camp in Manila, Philippines, where she rejoined other captive nurses. Conditions were brutal and arduous for prisoners. However, Bradley and her fellow nurses continued to care for the sick, earning the nickname “Angels in Fatigues” from other captives. She provided medical service, cared for starving children and often went hungry herself to provide for others. As she lost weight and her uniform loosened, she smuggled surgical equipment without drawing guards’ attention. This contraband assisted her in 230 operations and the delivery of 13 babies.

On Feb. 3, 1945, U.S. troops captured the camp, liberating Bradley. Bradley then promoted to first lieutenant. She continued her Army career and received her bachelor’s degree from the University of California in 1949.

During the Korean War, she served as a chief nurse for the 171st Evacuation Hospital.

On Nov. 30, 1950, an overwhelming Chinese counterattack forced U.S. personnel to evacuate Pyongyang, North Korea. Bradley refused to leave until all of the patients had been safely evacuated. As 100,000 advancing Chinese soldiers surrounded the site, Bradley jumped aboard the plane just as the ambulance she arrived in exploded from an enemy shell.

By 1951, Bradley became chief nurse for the Eighth Army, supervising over 500 Army nurses throughout Korea. By 1958, she promoted to colonel, making her one of the first Army nurses to hold a permanent rank.

In March 1963, Bradley retired from the Army and worked as a civilian nurse supervisor in West Virginia for two decades.

She received a total of 34 medals and citations, including two Legion of Merits, two Bronze Star Medals, two Army Commendation Medal and a Florence Nightingale Medal.

She passed away in 2002 and is buried at Arlington National Cemetery.