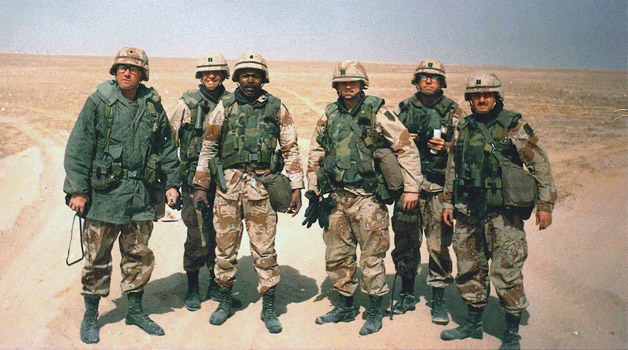 It’s hard to believe that 20 years have passed since the ground assault of Operation Desert Storm began on February 23, 1991. The air war had begun on January 17—as Brandon Friedman recalled in a recent entry—and now our time to begin operations had arrived. On that day, I was commanding a field artillery battalion in the 1st Infantry Division positioned along Saudi Arabia’s border with Iraq. As on the eve of every war and battle, there were a lot of unknowns, a lot of questions, and a lot of concerns as we prepared to carry out the mission assigned to us.

Although many of the specific memories and details of that day—and of subsequent days after we had advanced into Iraq and Kuwait—have faded, some memories have remained very clear. Among them are the character, the personalities, and the faces of the Soldiers it was my privilege to serve with and to lead.

Like American Soldiers of every generation, those with whom I served were a great and diverse mixture of young people—from every part of our great country and from every culture, ethnicity, and economic background. But their differences did not define them. What defined them, in my memory, was their willingness to serve, their dedication, and the way they put their hearts and souls into every assigned task—no different than the young men and women serving today, and over the past decade, in Iraq and Afghanistan.  All of them personify the four simple promises of the Soldier’s Creed:

Two decades ago, I wasn’t thinking of the day I’d be a Veteran myself, or of the Department of Veterans Affairs. I never dreamed I’d get to help serve Veterans at VA. But when Secretary Shinseki provided the opportunity for me to come back into government service, I didn’t hesitate. And as he’s often said about serving at VA, it provides an opportunity to give back to the Soldiers with whom we served and those we went to war with—and that’s a rare privilege not extended to every former service member.

For many Veterans of the Gulf War, the intervening years have not been without trouble and trials. And some of the problems they’ve faced and the conditions they suffer are related to their honorable service.  Many studies have been made of Gulf War Syndrome, and it is still not possible to say, with certainty, exactly what causes the conditions associated with it. It’s important to continue searching for causes of these illnesses, but a primary mission at VA is to care for and treat the Veterans who suffer from them—period.

That’s why VA recently provided presumption of service connection for nine new diseases associated with service during Operation Desert Storm. That’s why the work of the Research Advisory Committee on Gulf War Veterans Illnesses and the Gulf War Advisory Commission, both established in 2008, are so important. That’s why we must re-double our efforts to care for Veterans, their families, and their caregivers—of every generation.

VA will complete its mission to care for Gulf War Vets. VA will not accept defeat. We will not quit, and we will not leave behind a Veteran who has fallen to a Gulf War illness.

20 years is a long time, and for me those years have flown by quickly. But the Soldiers with whom I was privileged to serve, part of the more than 22 million Veterans who have kept this country free and safe, remain foremost in my memory.  It is an honor to serve them, and to seek better care, services, and benefits for every generation of our Nation’s Veterans.

John R. Gingrich is a former Chief of Staff for the Department of Veterans Affairs. He served in the U.S. Army for 30 years and commanded a Field Artillery battalion in the 1st Infantry Division during Operation Desert Storm.