Counting every Veteran on the way to ending homelessness 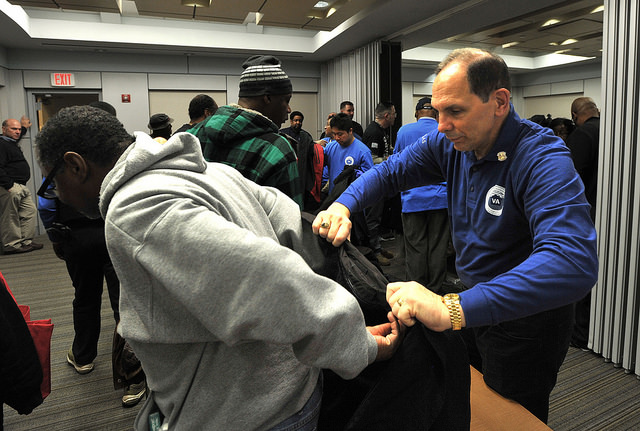 This week, I am joining volunteers across the country to measure the scope of homelessness in America during the point-in-time (PIT) count.

The PIT counts being performed across the country will provide us with a critical benchmark for knowing how much progress we’ve made so far, but we know we have to continue to push forward urgently to achieve this goal.

The current PIT count shows that VA is making progress toward our goal of ending homelessness among Veterans. On a given night in January 2014, an estimated 49,993 Veterans were without a safe, stable home in the United States – 17,885 homeless Veterans living on the street or other places not meant for human habitation and 32,048 in shelters, transitional housing programs or safe havens. This represents a 33 percent decline in the total number of homeless Veterans since 2010, and includes a nearly 43 percent reduction in Veterans living on the street.

Veterans who lived for decades on the street, in cars, abandoned buildings, and other unsuitable places now live in safe, stable homes of their own. I credit this success to the hard work of dedicated VA employees and thousands of partners, inside and outside of government.

Strong collaboration with the U.S. Department of Housing and Urban Development (which leads the PIT count nationwide), the United States Interagency Council on Homelessness and countless other organizations resulted in the adoption of evidence-based practices such as Housing First and rapid re-housing that have dramatically reduced the number of Veterans who are homeless and at risk of homelessness. By leveraging the expertise of local homeless service providers through the Supportive Services for Veteran Families (SSVF) program, organizations with the know-how, management infrastructure and commitment to serving Veterans are helping thousands to remain housed or get quickly re-housed if they fall into homelessness. In FY 2014 alone, more than 260,000 homeless or at-risk Veterans were served by VA specialized homeless programs. Over 72,000 Veterans and their family members were placed in permanent housing or were prevented from becoming homeless.

Together, we can end homelessness among Veterans, but we need everyone to get involved and join us in this mission. As a first step, join me in volunteering for this year’s PIT Count by contacting your local HUD Continuum of Care. If you know a Veteran who is homeless or at imminent risk of becoming homeless, please refer him or her to a local VA Medical Center, where our homeless coordinators are ready to help.