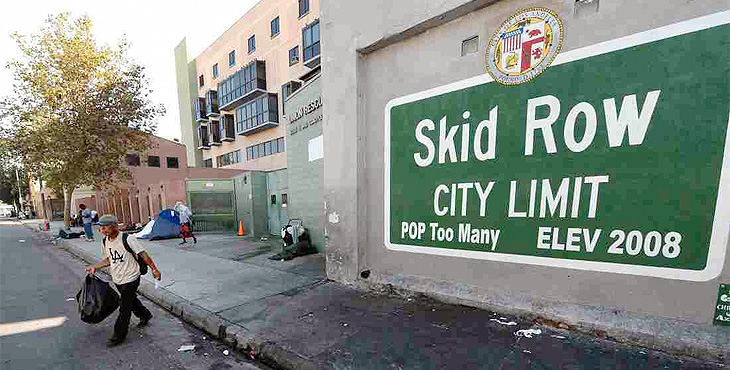 Secretary Bob McDonald walked the streets of LA’s Skid Row with local volunteers and VA employees last week, and tallied the homeless during the city’s annual point-in-time, or PIT count.

As they made their way through alleyways and backstreets lined with tents and makeshift shelters, they stopped to talk and ask, “Are you a Veteran?”

PIT counts are conducted across the country during the last 10 days of January. The data gathered from the interactions with the homeless is used to verify the effectiveness of outreach programs and to see where resources and services are needed. For a city like LA, where there are more homeless Veterans than anywhere else in the country, the numbers are vital.

“One of the things you learn in the Army is you never leave a buddy behind,” McDonald said to more than 100 volunteers at the LA Mission. “Unfortunately, we’ve left some people behind, and they’re our homeless Veterans. But I’m here to tell you that we at VA … are totally committed to achieve the goal of ending Veteran homelessness by the end of the year.”

The information collected is part of the overall effort to end homelessness among Veterans. Earlier in the week, McDonald signed a historic agreement dedicating the West Los Angeles VA Medical center to helping Veterans in need.

The agreement turns the corner on a long-running legal dispute and creates a plan specifically focusing on serving homeless Veterans, women Veterans, aging Veterans and Veterans that are severely disabled. McDonald will appoint a special assistant, who will report directly to him, to oversee the plan’s implementation with the necessary resources and support.