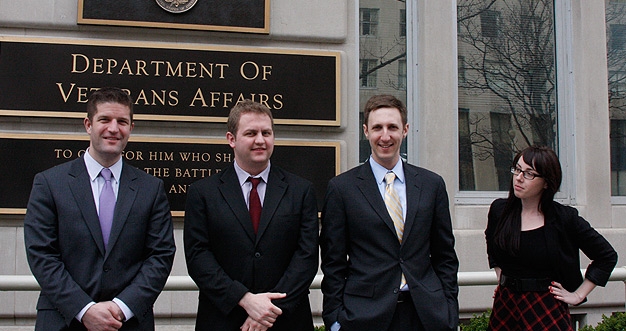 I have four really good friends. Well, three of them would say we’re good friends, and the fourth would claim that he’s my sort of boss. But we’re friends, whether he likes it or not.

I love being around them. We sit next to each other at least nine hours every work day. We eat lunch together. They tease me incessantly for my monthly jet setting. We laugh. A lot. But we work really hard too.

Sometimes I have this nagging feeling that, somehow, the stories I tell them are completely ridiculous. In their defense, most of things I say are ridiculous. I tell them about college, my foibles of law school and the messy interim between school and when I started at the Department of Veterans Affairs.

I feel guilty recounting these stories to them.  Mostly because I know (and have read) that at those exact moments when I was wearing candy necklaces in my favorite bar, worrying that my boyfriend was partying too hard with his fraternity brothers, my Veteran friends were in a remote place that I couldn’t conceive, then or now. They served our country and were willing to sacrifice their lives for something that I was taking for granted in Pittsburgh. Frankly, it makes me feel awful. But I can’t exactly look them in the face and say, “Your service makes me feel guilty – but I’m so thankful for it.  And it makes me want to cry and scream and hug you all at the same time.”

My civilian guilt is sometimes debilitating.

Part of my guilt is my own inaction at a watershed moment in our nation’s history. Everyone remembers where they were on September 11. It’s disappointing that I can vividly remember only a few things; I was sitting in my University’s student Union eating a bag of Cheetos waiting for my Tuesday morning theater class. Then the memories start to get hazy. I vaguely remember going to church. I remember crying hysterically over the loss of life. And I remember feeling exposed and scared.

After that, I know that we went to war but other than waiting in extra long lines at security checkpoints in airports, my life didn’t change at all.

I think about my grandparents on my mom’s side – Grammy and PapPap – who were younger than I am now during the Second World War. PapPap was a bombardier. I remember their stories about what life was like during the war. It was not an easy time. People were rationing, saving food, taking on new jobs, and every single American was involved. But somehow I missed the memo that we are at war and should probably do something about it. I mean granted, I was 19 years old and could barely keep my checking account above -$3.00, but I literally did nothing.

Then, I started working with Veterans. These are people whose stories touch me; everything becomes so real. And I am so thankful for their service and sacrifices. But I worry that I will end up feeling more guilty, that my flippant stories will overshadow my gratitude. As I conjure stories of spending my 21st birthday in a cute outfit surrounded by my best friends, I feel guilty. I know Alex spent his 22nd birthday in a place called Diyala, dodging sniper rounds and looking for buried, daisy-chained IEDs. I feel guilty when I know the worst thing that happened to me was the decision about whether or not to take the LSATs. The worst thing that happened to him was watching his friends and coworkers suffer emotionally and physically, worrying about his life and the lives of his comrades. I feel guilty that I never had to worry about that.

I’m not ashamed of the things I was doing while Alex, Kate and Josh were in Iraq and Brandon in both Iraq and Afghanistan. Despite knowing that we all strive to do what we’re good at (NO ONE in the United States that wants me defending them from anything, especially terrorists) I still feel guilty. I become more ashamed that I did so little while they were out doing so much, and then my shame becomes guilt and then guilt becomes worry that my guilt is overshadowing my gratitude. It’s a vicious cycle.

The pit in my stomach, despite quiet encouragement and supreme understanding and patience from my four favorite Vets, does not go away. So, I turn inward, and act outwardly in an attempt to selflessly convey my gratitude for their service and in turn repay even a small part of the favor. I try to work tirelessly and intelligently to provide solutions to some of the most serious problems facing Veterans. I’m committed to interacting with Vets online, providing information and access to make their lives easier. And I try to be a good civilian. I try to be respectful and understanding and convey my gratitude in selfless and serious ways.

My life after 9/11 did not change. Sure, the lines are longer when I travel and I can’t bring my make up on the plane anymore, but my safety and sanity was restored almost instantly thanks to jobs that my friends did willingly. And the jobs that Vets before them did. All before the New Media team Veterans meet me for lunch every day and suffer through my silly stories of blissfully ignorant revelry.