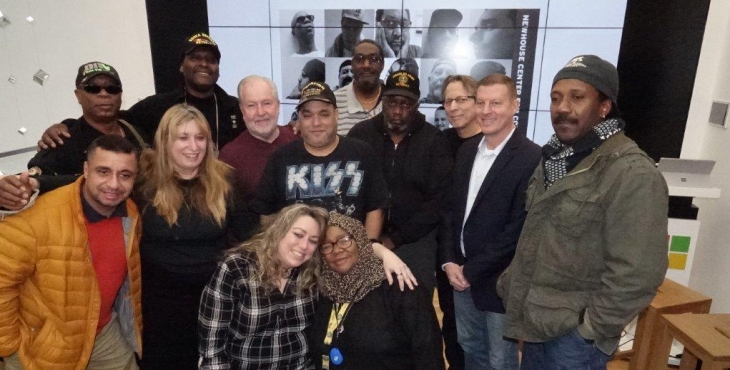 Recently visitors to Microsoft’s flagship Manhattan store got a glimpse into the world of the American Veteran. Through the Eyes of a Veteran—a digital showcase and panel discussion held in December—represented the exhibit of the same name still currently on display at Snug Harbor Cultural Center, in Staten Island.

The Snug Harbor exhibit, which runs through Feb. 12, features the works of about 75 Veteran artists originating from the Creative Arts Program at the VA New York Harbor Health Care System’s Brooklyn Campus.

Brenner, who has been introducing Veterans to the arts for 38 years—with 26 of those spent at VA—said the show at Snug Harbor “is a composite of years and years of work from the other shows they’ve done.”

Artist and Veteran Robert Santiago’s work “On Patrol” is on display at Snug Harbor Cultural Center, in Staten Island, New York, part of the Through the Eyes of a Veteran exhibit, which includes the works of more than 70 other Veterans.

Through the Eyes of a Veteran expresses a range of themes—from battling PTSD, to the different aspects of military environments both stateside and deployed—and also looks at Veterans through the lens of their individual portraits.

“We did the Portrait of a Veteran [exhibit] about what the images of Vets can tell us about the Vet,” said Brenner. “When people see Vets, they see the uniform, but these are all individuals [with] different viewpoints, ages, ethnic groups, and the locales that they come from. It gives us a broader view of who the Vets are; otherwise, we don’t get to know them because of the uniform.”

The diverse display is comprised of photography, collages, mixed media and more, and collectively represents the artists’ many interpretations of their service in the U.S. military and beyond.

During the Microsoft Store presentation, a panel of seven Veteran artists featured in the exhibit discussed their works and the creative process.

One of these was George Robertson, who retired from the Army after 20 years of military service. Until he enrolled in the Creative Arts Program at the Brooklyn Campus, Robertson had not had an interest in art.

Retired Army Veteran George Robertson discusses his artwork during a digital showcase held Dec. 21 at the Microsoft Store in Manhattan. The event represented Through the Eyes of a Veteran, the exhibit of the same name on display at Snug Harbor Cultural Center, in Staten Island.

“It just started once I came here,” he said. “Just sitting down and actually working on a project. I was relaxed, focused on it, but actually focused and doing something that is just opening up a new door of functioning. Now I’m working on four different projects at the same time.”

Robertson’s newfound focus through the Creative Arts Program has been the right kind of healing for him. “I’m able to get up and go out and be around other people,” he said. “Before, I couldn’t. I think the only surviving grace was coming to the VA and being around [other] Vets. That’s what allows me to function.”

Whether she’s seeing the progress that results from art therapy or artistic accomplishments, Brenner shares in the excitement of her many Veteran students and graduates.

“It’s giving them tremendous confidence,” she said. “You get up in front of a packed house and you’re a young Vet (on the panel) and all eyes are on you, and you can hear a pin drop … these are the top cultural institutions of the city … you are bringing awareness to this, to Vets and the arts, and that’s so important.”

But Brenner is also concerned that the public should see beyond just the artistic talents, to the heart of the Veteran experience.

“As gratifying and exciting as it’s been, one of the things bothering me is that I’m seeing people coming out of the woodwork and they know nothing about Vets,” said Brenner, “but they say it’s attractive or the ‘flavor of the month’ … people are trying to come on the bandwagon without really understanding the complexity of this population.”

The significance of the work done at the Brooklyn Campus surpasses any of the accolades that come with it.

“They love that they have a voice,” Brenner explained. “This work doesn’t get sold (by law), because it’s done at VA. It’s bigger than that; it’s really more important. These are the Veterans of our generation … the visual and artistic testimonies of the Vets of our generation.”

Through the Eyes of a Veteran is located in the Commons Galleries at Snug Harbor. For more information on the exhibit, contact the center at http://snug-harbor.org/about-us/contact-us/.