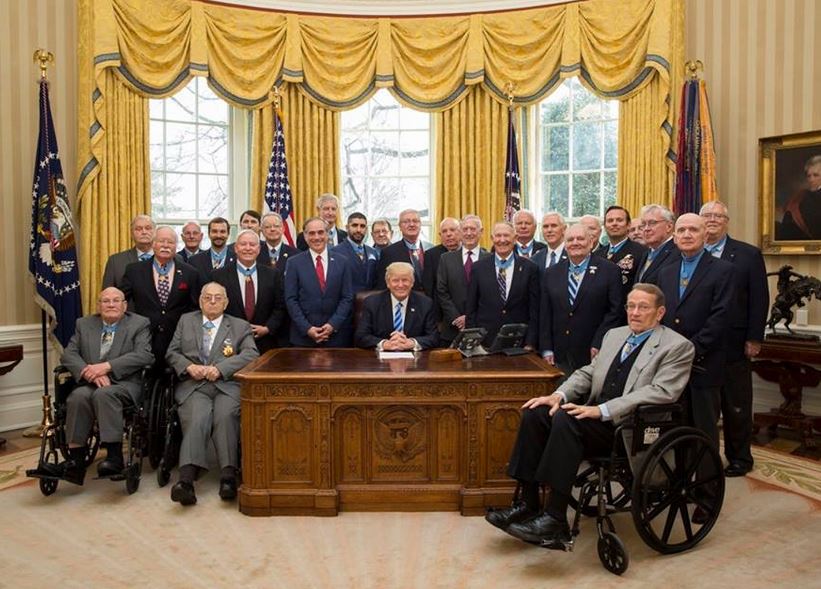 National Medal of Honor Day traces its roots back to March 25, 1863, when six members of the Andrew’s Raiders became the first to receive the Medal of Honor for their role in the Great Locomotive Chase during the Civil War.

Nearly 154 years later to the day, 25 Medal of Honor recipients gathered in the Oval Office to be honored by the president, vice president, secretary of defense and VA secretary, Dr. David Shulkin.

“To all of those gathered here today, and to all of those warriors who could not be with us, we thank you,” the president said. “Your acts of valor inspire us – and they show us that there is always someone on the night watch to ensure a bright sun rises on America each and every morning.”

While National Medal of Honor Day was inspired by those first recipients, it did not become a federally recognized day until Public Law 101-564 was signed into law Nov. 15, 1990.

In part, the law reads, “Whereas the Medal of Honor is the highest distinction that can be awarded by the president, in the name of the congress, to members of the armed forces who have distinguished themselves conspicuously by gallantry and intrepidity at the risk of their lives above and beyond the call of duty … Whereas public awareness of the importance of the Medal of Honor has declined in recent years; and Whereas the designation of National Medal of Honor Day will focus the efforts of national, State, and local organizations striving to foster public appreciation and recognition of Medal of Honor recipients.”

VAntage Point has a history of honoring our nation’s Medal of Honor recipients such as Michael “Mike” Fitzmaurice  who received his medal for gallantry in Vietnam and Woody Williams for his daring attacks on Iwo Jima during World War II.

Not to be left out, VAntage Point readers have also joined in not only honoring Medal of Honor recipients with their thoughts, prayers and comments, but also by tracking down the family of one sailor lost to history, so that they might know of their ancestor’s heroics by saving another’s life.