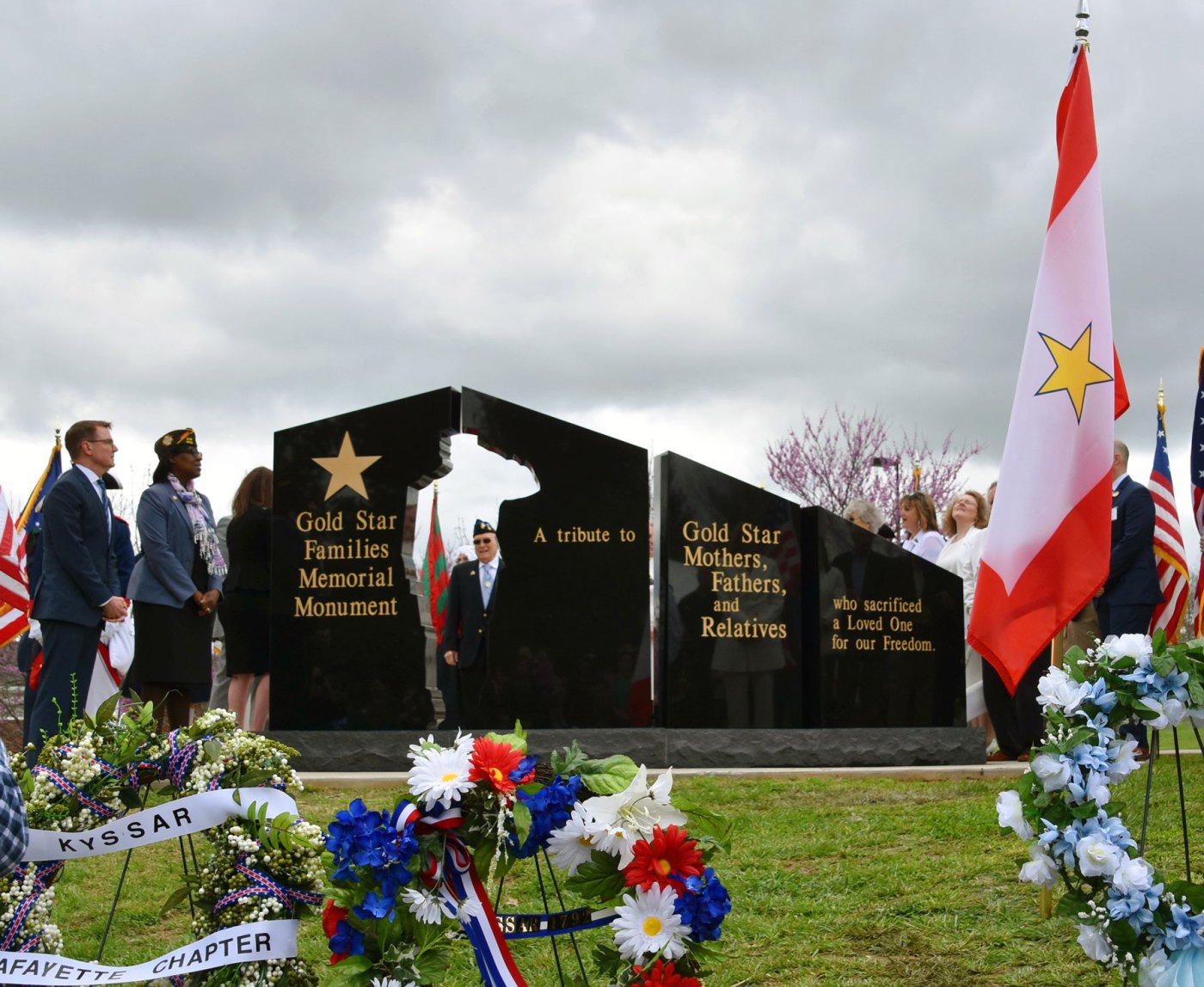 With the wind blowing steady through dozens of American flags, the Veteran and Gold Star Families community in central Kentucky dedicated a new memorial Tuesday in honor of those who made the ultimate sacrifice in service to our nation.

“Today, we give this monument to the community,” said Chad Graham, president and director of operations for the Hershel “Woody” Williams Medal of Honor Foundation, during the event held at Lexington’s Veterans Park.

Eighteen months after beginning the project, the Lexington community unveiled the state’s third Gold Star Families Memorial Monument. The monument is the 18th tribute placed in honor of Gold Star Families to, according to the foundation’s website, “preserve the memory of the fallen and stand as a stark reminder that freedom is not free.”

“As these members of the Gold Star Families know, nothing can adequately prepare a family for the news that a loved one has perished while serving our country,” Lexington Mayor Jim Gray said. “This extraordinary monument will stand as a reminder of those great sacrifices by all those who served and by the families they have left behind.”

“I have a special appreciation for the Gold Star Families. I don’t think that any of us who have not lost a loved one to war or the service of our nation can truly understand your loss,” Kentucky Lt. Governor Jenean Hampton added. “We truly cannot understand the fullness of your sacrifice, but just know that there are truly grateful Americans who honor you.”

Click on a photo to view the full image and caption. Photos by VA’s Office of Public and Intergovernmental Affairs.

Joining monuments at Fort Knox and in Ashland, Kentucky, the Lexington memorial pays tribute to the families of nearly 10,000 Bluegrass state service members killed in the line of duty since World War II and registered with the National Gold Star Family Registry.

In 2003, Lynn Romans’ son, Sgt. Darrin K. Potter, was serving with the Kentucky National Guard in Iraq when he was killed. Potter was the first Kentucky Guardsman to die in the line of duty since Vietnam. Romans shared her son’s story with the crowd, paying tribute as well to the other Gold Star Families in attendance.

“I’ve come to realize that behind every Gold Star pin is a story of great loss, much heartache, but also I’ve seen much strength,” Romans said. “It is very important to me that the sacrifice of my son, as well as many others who lost their lives and are represented here by loved ones today, never be forgotten.”

“He is feisty, he is strong, and do not get in Woody Williams’ way,” Kentucky Secretary of State Alison Lundergan Grimes joked as she referred to Williams’ dedication to the project. “We are grateful for his persistence. We are grateful that he had the foresight to make sure that in every town, whether small or large, across this nation, we stand up and honor our heroes, those that give us the right to live in this free, democratic society.”

“We, the American people, throughout our history have had those among us who have been willing to serve a cause greater than themselves,” Williams explained as he spoke to the audience. “And yet realizing that service, to protect our way of live or to give someone else a life of freedom that they had never known about nor experienced, may require sacrifices honored by this memorial monument.”

“There is no substitute for freedom, a gift almost as precious as life itself. This memorial speaks of those lives, and it speaks for itself. This community is represented in that and on that memorial. We know memorials do not ease the pain…or the heartache or the grief.  But perhaps, the tribute and the recognition will give some peace and solace to the loved ones who sacrificed one of their very most precious gifts, one of their own.”

Veterans and Gold Star Families from across the region, as well as representatives of Veterans service organizations, reserve and active duty service members, Lexington fire fighters and community members attended the Tuesday dedication.

“As an Air Force Iraq War Veteran and VA employee, I was proud to attend the dedication of the Gold Star Family Memorial Monument today in Lexington,” said Juan R. Jackson with VA’s Veterans Experience Office’s southeast district. “It was wonderful to see Medal of Honor recipient Woody Williams come together with state and local officials to honor the families and service members who have given the ultimate sacrifice.”

With 18 monuments now in place, there are still 40 memorials in progress. To find out more about the locations of the memorials, visit the foundation website by clicking here.