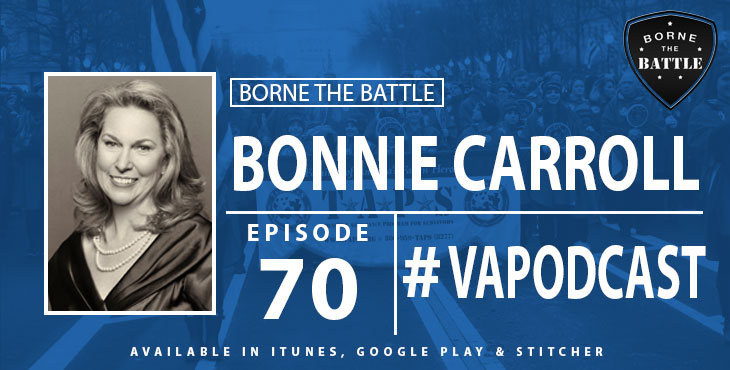 The second part of VA’s motto calls on us to care for the widows and orphans of those that have “borne the battle.” Earlier this year, we had Ashlynne Haycock on during our round-table podcast talking about the Forever GI Bill, and she talked about how a crucial element of the new bill was to benefit survivors. This week, we bring on Bonnie Carroll, the president and founder of the Transition Assistance Program for Survivors (TAPS).

Bonnie Carroll founded Tragedy Assistance Program for Survivors (TAPS) following the death of her husband in an Army C-12 plane crash on November 12, 1992. TAPS is the leading national Military Service Organization providing compassionate care, casework assistance, and 24/7/365 emotional support for all those impacted by the death of a military loved one. She is a Veteran of the Air National Guard and a 2015 recipient of the Presidential Medal of Freedom.

Bonnie and I talk about her military service, losing her husband, founding TAPS, dealing with grief, and how survivors can get assistance and peer-to-peer support through TAPS.