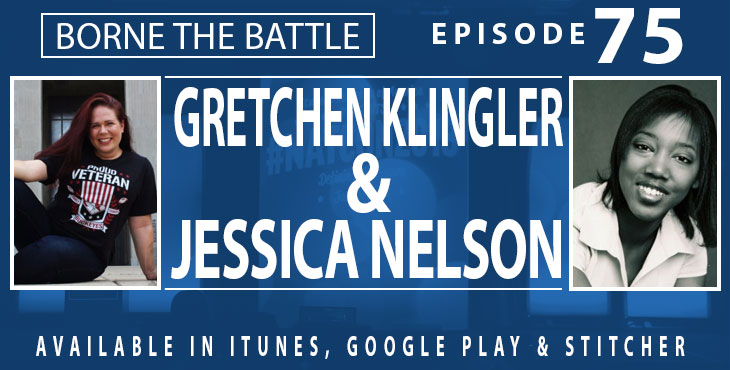 Each year Student Veterans of America choose an exceptional student Veteran as Student Veteran of the Year. This year, they narrowed it down to ten finalists, announcing the winner at the end of their national conference.

This week, we are spotlighting 7-8 of this year’s finalists, including the person that was awarded Student Veteran of the Year. Yesterday, we spoke to two exceptional Veterans, Aaron and Kirsten. Today, we learn from an Air Force Veteran and a Marine Veteran, Gretchen Klingler and Jessica Nelson. Each will tell us about military service, leading a Veterans group on campus, and best practices for campus outreach.

After completing 6 years of enlisted service in the United States Air Force and 2 tours overseas as a member of the 25th Intelligence Squadron, Gretchen Klingler began her studies at The Ohio State University in 2015, double majoring in Anthropology and Arabic, and double minoring in Women, Gender, and Sexuality Studies, and Middle Eastern Studies. After arriving at Ohio State, she became President of her Student Veterans of America chapter – Vets 4 Vets – after only a year at OSU, and 2 years later, continues to serve as the chapter’s President as well as the Veteran Community Advocate for Vets 4 Vets. She has quickly become a well known figure in the Veterans community at Ohio State, receiving Ohio State’s first ever Military and Veteran Student of the Year award in February 2017, and closely following was chosen to represent the Pat Tillman Foundation as Ohio State’s first undergraduate Tillman Military Scholar. She has been invited to speak at several Ohio State community events on behalf of the veterans community, and is frequently engaged with representatives from Ohio’s top veteran policy makers. In her spare time, and in conjunction with her undergraduate research, Gretchen works with local Middle Eastern immigrants and refugees tutoring English, and helping them prepare for their Naturalization interviews to become American citizens. She has been accepted to present her research at an academic conference in the spring, and hopes to publish her research in 2018.

Jessica Nelson is a current student of Psychology and Community Engagement and Social Change, Ada Comstock Scholar at Smith College, and Marine Veteran. Served honorably from 2012 to 2017 in multiple arenas including Operation Inherent Resolve, Korea, and Japan. This year she was lucky to be selected to participate in the 2017 SVA Student Leadership Institute and the Warrior Scholar Project academic boot camp at Princeton University. She is a Service to School Undergraduate Ambassador, serving as a mentor to applicants to top undergraduate programs in the country as they go through the application and interview process to schools. She serves as one of the Social Co-Chairs on the Ada Comstock Executive Cabinet as a First Year Ada Comstock Scholar this year, planning events and working with the executive board to ensure that the Class’ needs are met and they are working with the rest of the student body and administration in an effective and efficient manner.