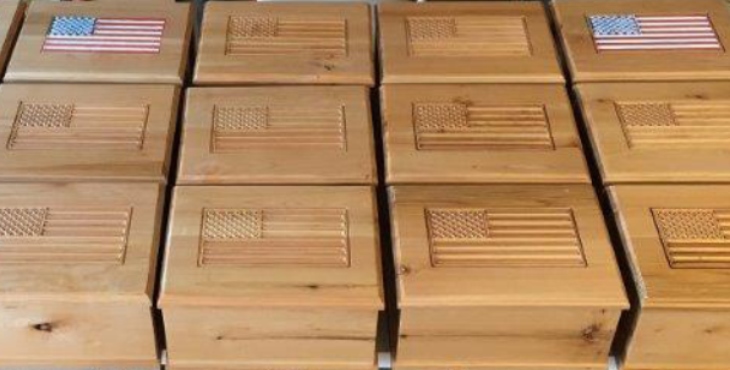 A labor of love from volunteers in Arizona will provide a dignified final tribute for Veterans who have no family to plan their funerals.

Representatives from Quailwood Woodworkers Club recently presented 20 handmade, wooden urns to Prescott National Cemetery. The urns will be used for the unclaimed remains of Veterans who are placed at the cemetery throughout the year.

This partnership began June 2017 when Bob Stolarski presented the idea to a Prescott National Cemetery caretaker. The urns were then constructed in Stolarski’s garage with the help of 10 volunteer woodworkers, among them local Veterans and community members.

“Prescott National Cemetery would like to thank our Veteran community and community partners for this heartfelt project,” said Rachel Charles, the cemetery’s assistant director.  “They provided beautiful urns to house some of our fallen Veterans. These Veterans should always be remembered for their selfless work.”

While Prescott was closed to new interments in 1974, cremated remains are accepted for inurnment in a columbarium. The present site of Prescott National Cemetery is thought to be its third location. The original cemetery was established when Fort Whipple was a camp near Del Rio Springs in 1864, and was moved soon after to the location of the Northern Arizona VA Health Care System building. The cemetery was relocated again in 1869 to its current location because flash floods washed out numerous burials in the previous site. The cemetery covers slightly more than 15 acres and was placed on the National Register of Historic Places in 1999.

Together with the community, Veterans service organizations, local funeral homes and volunteers, VA works to honor those who die with no next of kin to claim their remains and insufficient funds to cover burial expenses. These Veterans are eligible for burial in a VA national, VA-funded state or tribal Veterans cemetery, with a government headstone or marker. More information for those assisting with burials for unclaimed Veteran remains can be found here.