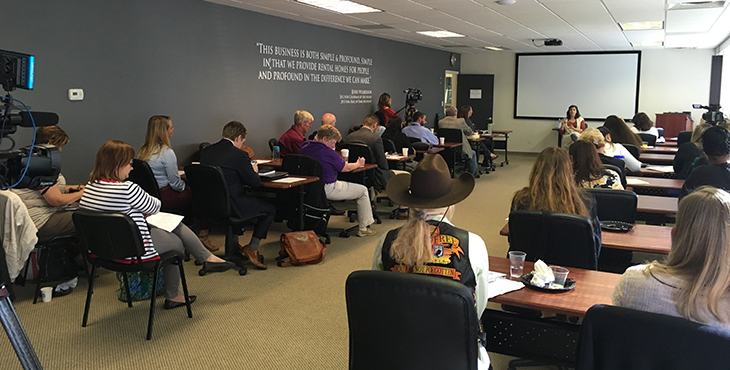 In May, National League of Cities (NLC) will host a landlord engagement event in Oakland, California, in cooperation with VA’s Homeless Programs Office. This is the last in a series of 10 events across the country hosted by NLC and its corporate partner, Wells Fargo, as part of their effort to help end Veteran homelessness. Through this event and the others like it, NLC and VA engage landlords to help remove barriers Veterans face in securing permanent housing, such as poor housing records, application fees and background checks. The approach involves educating landlords on VA services available to homeless Veterans as well as identifying available units.

NLC represents local elected officials and municipal government staff in the 19,000 cities, towns and villages across the United States. Through advocacy, research and technical assistance, NLC helps city leaders build better communities. Homelessness, in particular Veteran homelessness, is a priority issue for NLC. In addition to hosting the landlord engagement events, the organization is the lead national partner with federal agencies and other national organizations for the Mayors Challenge to End Veteran Homelessness.

In partnership with the U.S. Interagency Council on Homelessness, the U.S. Department of Housing and Urban Development (HUD) and VA, the Mayors Challenge asks elected officials to make a permanent commitment to ensuring that Veteran homelessness is rare, brief and non-recurring. As of March 2018, more than 530 local and state elected officials are part of the challenge, including mayors, county and city officials and governors.

NLC knows that to end Veteran homelessness, people throughout communities must be involved. It takes individuals at the federal, state and local government levels, but it also takes those who are positioned to provide homeless Veterans with one of the things they need most: housing.

Elisha Harig-Blaine, NLC’s manager for Veterans and special needs, notes a few best practices for this type of engagement:

Expand the pool of landlords who actively work to house homeless Veterans.

Harig-Blaine and NLC have found that, in general, landlord engagement events held by community-based agencies and organizations include only the landlords who are already their partners. By forging partnerships with local apartment associations, communities can reach additional landlords to engage.

Harig-Blaine suggests that communities ensure that their mayors are part of the Mayors Challenge and then join their mayors in asking apartment associations to co-host landlord engagement events. The power of local elected officials to recruit landlords is best used when communities let the apartment associations handle communications with their members — because they know their members best.

In communications with landlords, explain the distinction between the HUD-VASH program and HUD’s traditional voucher program.

Harig-Blaine notes that the HUD-VA Supportive Housing (HUD-VASH) program is unique. Along with a housing voucher, Veterans accepted into HUD-VASH receive case management from VA that mitigates many of the behaviors that landlords may be wary of when housing homeless Veterans, such as unemployment or drug use. The VA case managers connect Veterans to supportive services — including health care, mental health treatment, employment assistance and substance use counseling — that help them stay housed.

It is also important to educate landlords about other programs for housing homeless Veterans and their families, such as Supportive Services for Veteran Families (SSVF). The SSVF program provides homeless Veterans with a time-limited housing subsidy to prevent homelessness or rapidly re-house Veterans who fall into homelessness.

In addition, NLC has seen the benefits of landlords hearing from their peers who are already housing homeless Veterans using the HUD-VASH or SSVF programs.

Define what is being asked for when talking to landlords about “vacant units” and “partnerships.”

In working with local apartment associations, the NLC has learned that when landlords and property managers are asked about vacant units, they may reflexively think about some of their higher-end housing units. These units are often rated “Class A” assets and are most likely to have higher rents than HUD-VASH and SSVF are able to pay each month.

Landlords who have units with rents closer to what HUD-VASH or SSVF are able to pay are generally rated either “Class B” or “Class C” real estate. It is important for service providers to make this distinction when talking with landlords about vacant units.

In addition, it’s important to establish relationships with landlords who both own and manage their buildings. Many rental units are owned by one person or company but are managed by another. These rental units are referred to as “fee managed” or “third-party managed.”

In his interactions with homeless service providers, Harig-Blaine has learned that when they ask for a partnership with a landlord, they are really looking for a landlord who can be flexible. This may mean being lenient when it comes to an applicant’s housing record, application fees and criminal background checks, understanding that Veterans’ pasts do not define them.

Rather than ask landlords to “partner” with communities to provide “vacant units,” Harig-Blaine says that it is important to initially develop relationships with owner-managers of Class B or C rental units.

Outside of apartment associations, communities can engage their elected officials, particularly those already participating in the Mayors Challenge, in an effort to further incentivize landlords to rent units to homeless Veterans. The efforts could take many forms, Harig-Blaine says. For example, communities can create a fund to cover the costs that can prevent Veterans from applying, such as application fees, back-utility bills, the cost of damages in excess of the security deposit, or even a fee to hold a unit while service providers identify a Veteran to apply for it. He adds that if local officials are not already signed up for the Mayors Challenge, it’s a good opportunity to tell them about it and encourage them to take part.

As evidenced by NLC’s best practices and work with various partners, it’s clear that ending Veteran homelessness is a group effort — and regardless of your role in your community, you can become part of the solution. Other ways to get involved in the mission include hosting or participating in an Operation Reveille or a Stand Down event, or hiring homeless Veterans to work for your business or organization.

If you are a landlord, property manager, or developer who would like to assist with providing affordable housing for Veterans exiting homelessness, please contact us at homelessvets@va.gov.

With the community working as a whole, no Veteran will be left behind.

Anthony Love serves as the director of community engagement for the Department of Veterans Affairs, Veterans Healthcare Administration, Homeless Programs. Anthony has over 18 years of experience in homelessness, Veterans and poverty issues. From 2010-2012, Love served as deputy director for at the United States Interagency Council on Homelessness, where he was responsible for coordinating the state and local work of the council and serve as the lead on Veterans issues. Love earned a Master of Arts in Public Administration from the University of Missouri‐Kansas City.