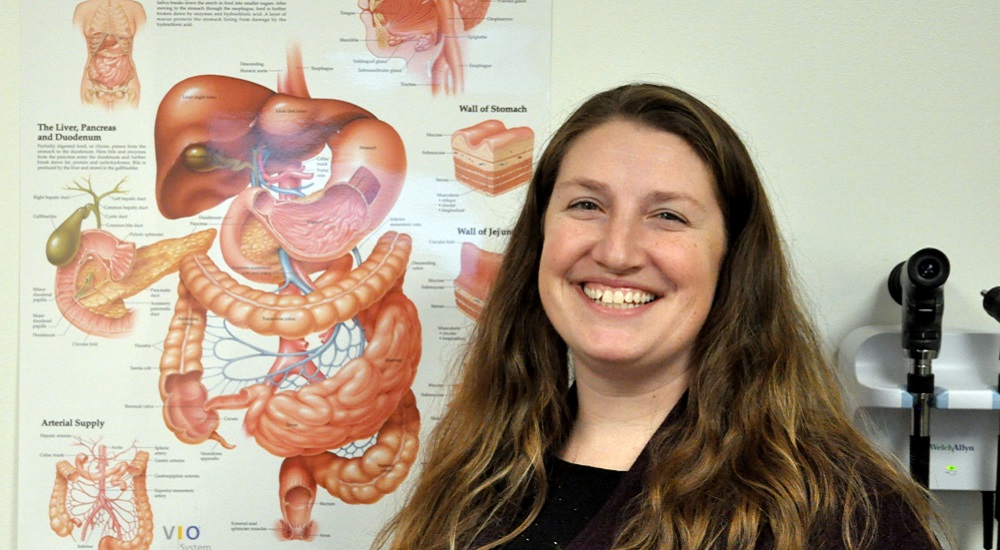 For Army Veteran Nicole Bundas, life is a constant game of anticipation.

As someone with Crohn’s disease who has frequent bouts of diarrhea, she always has to plan where she is in relation to a restroom. The number of her trips to the restroom depends on whether she’s experiencing intestinal inflammation, or a flare. If that’s the case, she says, it could be more than five per day.

Bundas praises her colleagues at the VA Ann Arbor Healthcare System and her family for being supportive.

“It’s really been a struggle for me, especially at work, having to realize that this disease changes your life,” says Bundas, a former member of the Michigan National Guard. “Most people can just get up and go, kind of, `I can just go on a trip.’ Nobody wants to go to the restroom multiple times and possibly have an embarrassing accident or something like that in your place of business. So you think about that more.”

Bundas, 36, praises her colleagues at the VA Ann Arbor Healthcare System, where she works in human resources, as well as her family, for being supportive.

She was diagnosed with Crohn’s disease in 2008. At the time, she was experiencing extreme abdominal pain and cramping while training at Fort Dix in New Jersey for a year-long deployment to Iraq. She ate a high-carb diet that included many ready-to-eat meals and was under a lot of stress as a single mom preparing to leave two kids for a tour in Iraq, where she served at a press center in Baghdad.

Bundas falls into one of the two age groups that are most impacted by IBD: patients diagnosed between 20 and 40, and those between 60 and 80. Many post-9-11 Veterans like her are in the younger group. But the high-carb diet they consumed to support their rugged physical activity in the military didn’t necessarily trigger their disease, says Dr. Akbar Waljee, a gastroenterologist at the Ann Arbor VA who treats Bundas.

Waljee developed a model to predict oncoming flares in IBD patients. He notes that no one has been able to pinpoint what causes the disease. He says genetics, smoking, diet, infections, and drugs are all factors that can make one more susceptible. “But it’s not one thing,” he emphasizes.

Bundas says two other members of her family have Crohn’s disease and three others have ulcerative colitis. Still, doctors have been unable to determine if a specific gene or marker caused her Crohn’s disease.

Waljee says there’s no one-size-fits-all diet for those with IBD. Foods high in carbs, and greens like lettuce that are hard to digest, tend to worsen symptoms, although some people may be fine with a carb-rich diet, he says. Bundas is on a low-carb, low-sugar diet; she says it helps reduce the inflammation. She also takes two immunosuppressive drugs to control intestinal inflammation.

Waljee hopes his model, which he described in a recent journal article, will help doctors better individualize care for IBD patients and prevent IBD flares.

Bundas says she appreciates the efforts to improve care for her and other patients.

“I know not everyone can be seen at the Ann Arbor VA because not everybody’s a Veteran. But for those who are, or if you’re going to see a doctor outside, look for someone who is continuing to move forward and is on the cutting edge of things and not just sitting back and doing things how they were always done. We need to stay on the cutting edge in medicine because that’s how we’re going to continue to make progress.”

Mike Richman is a Writer-Editor with VA Research Communications