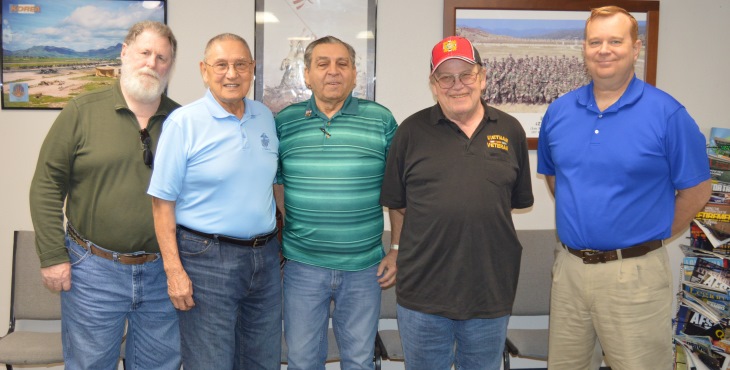 Volunteering is typically a win-win situation. The volunteer gets satisfaction from being part of something bigger than themselves, as well as camaraderie and opportunities to form new friendships. Many organizations come to depend on their volunteers. The Louisiana Department of Veterans Affairs St. Tammany (West) Parish Service Office is one of those agencies that not only depends on, but also cherishes, its volunteers.

When a Louisiana Veteran or military family member walks through the doors of the department’s Covington, Louisiana, office, they are immediately greeted with warm smiles of fellow Veterans that help them feel comfortable during what can feel like a daunting claims process.

This particular office has some very dependable Veterans that come in on a weekly basis to be of service to their brothers and sisters in arms.

“In the four years that I’ve worked for the Louisiana Department of Veterans Affairs, I have been blessed with getting to know some of our most dedicated Veteran supporters: our volunteers,” says Darlene Graves, St. Tammany Parish Veterans assistance counselor since June 2017.

“I couldn’t do the many jobs that need to be accomplished during the week without their help,” says retired Chief Master Sgt. Graves, who was previously assigned as a Veterans assistance counselor at the Slidell, Chalmette and Belle Chasse offices.

Among those volunteers is fellow Air Force Veteran George Usery who spent four years serving in the Vietnam War and now deals with the after-effects of prolonged herbicide exposure.

“Rolf saved my life,” he says, referring to Veterans assistance counselor Rolf Klingenberg. Usery struggled with undiagnosed PTSD for decades until a chance meeting led him to Klingenberg who immediately started advocating for him.

It took time and hard work to battle with some of his demons, but Usery says he is doing better now.  “We have a good group of dedicated people volunteering here,” says Usery, who’s been a volunteer for a decade now.

“Volunteering makes me feel good because I’m helping people like me,” he says of the group’s efforts to ensure all Vets have a good experience when applying for the benefits they earned.

Many St. Tammany Parish residents continue to show up and offer their assistance to the Veterans in their communities, and their helping hands find ways to make the claims process a little easier at this office.

Danny Flanagan served in the United State Army for 21 years as Black Hawk mechanic and just started volunteering one day a week in December of 2017. He says he appreciates the camaraderie with volunteers that are also fellow Veterans.

His advice to Veterans and military families that are unsure about whether they should file a claim is to “get to one of the Veterans assistance counselors.”

He jokes that some Veterans fall into the “barracks lawyer syndrome.” A “barracks lawyer” is a member of the armed forces who speaks or acts like an authority on military law, regulations and the rights of service personnel, but they tend to not have all of the facts.

For example, many Vets are hesitant to pursue claims or use programs because of the negative comments and/or experiences of others. Flanagan recommends that military families apply for benefits and use available programs themselves as each case, experience and end result will be very different.

In his case, he successfully used the Veterans Choice Program to cover 100 percent of the costs of a very specific and expensive medical test he needed. He is glad that he did.

“I was so smart, they sent me to Nam’,” Rice jokes after sharing he has a 10th grade high school education. He worked in multiple positions, including pipe insulator, after his return from a war that left him as a 100 percent service-connected disabled Veteran. Rice says he volunteers because it’s the right thing to do. “This is good therapy for any Veteran.”

Rodolfo “Rudy” Sutis is a retired Marine with 30 years of military service to our country. He has had a colorful life in which he held a variety of jobs.

“President Herbert Hoover was my first president,” he jokes while skirting the question about his age since he is currently the oldest Veteran in this volunteer group.

Sutis has been volunteering at the St. Tammany Parish Office for the past four years. “Matt helped me a lot,” he says of former Veterans Assistance Counselors Matt Cole, who is beloved and respected in the area’s Veteran community.

After what Matt did for him, Sutis says he wanted to serve fellow Veterans in this capacity as well. “I needed to do something for Veterans, too.” He jokes that the pay isn’t bad, either. He’s proud of his recent promotion, saying “I now get two cups of coffee a day!’

Allen Phillipe served in the United States Air Force for five years and worked as a technology developer for 49 years. “Matt (Cole) saved our lives,” he says, which is also why he now volunteers.

“They come in angry,” says Phillipe. “You can’t blame them; we’re all broken.” He has been volunteering at this office for three-and-a-half years and was instrumental in helping to incorporate music into the waiting room experience for Vets which he says helps.

Other opportunities for volunteers are available across the state at each of state’s 74 Parish service offices, five state-of-the-art Veterans home and four Veterans cemeteries.

The workdays are perfect for people who are interested in learning more about Veterans and their service to our country. Volunteers can take part in hands-on service alongside experienced  staff and volunteers prior to being put on a permanent volunteer rotation. For more information about the Louisiana Department of Veterans Affairs, please visit: www.vetaffairs.la.gov.