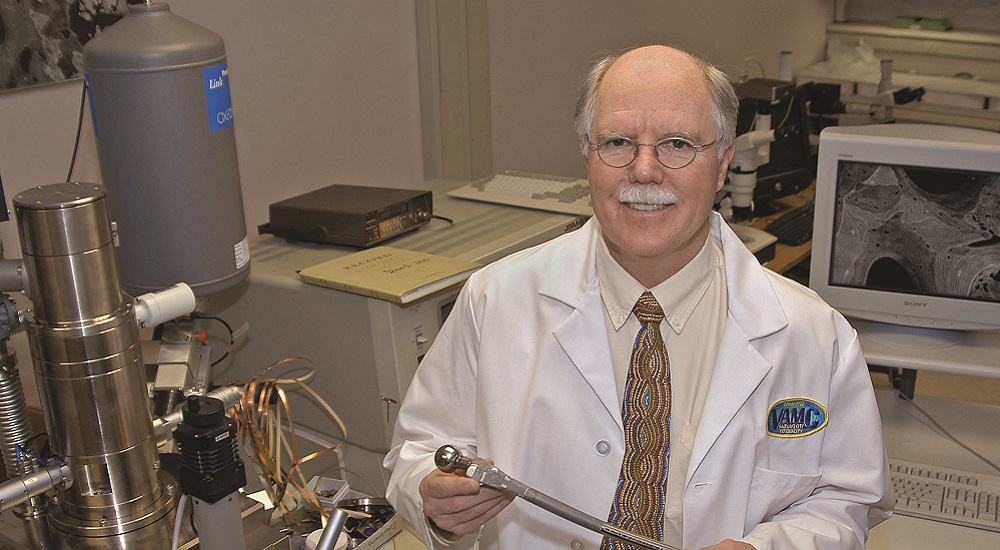 Dr. Roy Bloebaum, Air Force Veteran, pictured above, is the former director of the Bone and Joint Research Laboratory at the VA Salt Lake City Health Care System. He has devoted more than 30 years of his career to orthopedic research, with a focus on developing implants for Veterans with arthritis and amputations. The implants for amputees are the product of a patented technology that allows Veterans to be more active and free of the inconvenience of socket suspension systems.

In 2014, he received the prestigious Paul B. Magnuson Award for driving research toward the development of a new generation of prosthetics. Bloebaum served as a pararescueman, in the most elite unit in the Air Force, and received the Distinguished Flying Cross, among other medals, for his service during the Vietnam War. He will always believe in the pararescue motto: “So that others may live.” He recently retired from VA but has returned to volunteer on amputee care research.

What drove you to military service?

As an inexperienced 18-year old, I saw there were few opportunities for growth and employment. I chose the U.S. Air Force because my namesake, Roy Smith, my father’s first cousin and best friend, was killed on a bombing run in World War II.

In 1968, as a parescueman, I was assigned to cover Apollo 7 out of Perth, Western Australia, in case an emergency landing was required in the Indian Ocean. If so, we would parachute in and place the flotation collar on the capsule and wait for a friendly ship. During a day off, a young lady I met took me to visit the University of Western Australia in Perth. I thought the campus was amazing and chose to go there as a Rotary International Scholar, which is a goodwill international program, for a doctorate in human biology and anatomy. I eventually began a fellowship in the department of orthopedics at the University of California, Los Angeles, and got involved in orthopedic research.

Did you have mentors who inspired you in life, the military, or your research career?

No one progresses or becomes successful without mentors to inspire them. Although they grew up poor, my parents were rock-solid honest, hardworking, and loving. As far as my military service, every pararescueman (PJ) I served with was inspirational. You do not make it through PJ training and not be inspired by those who are willing to die “so that others may live.”

My one year of PJ training involved Army jump school, Navy Seal scuba training, Air Force survival school, Air Force medic training, Army Ranger mountain rescue training, and Air Force pararescue school, where the training was aimed at rescue work anywhere in the world. Following graduation, I was assigned to Guam where the main goal was to assure coverage of fighter pilots transporting jets from Hawaii to the Philippines and South Vietnam. If complications occurred and the aircrew had to eject, we would parachute into the Pacific and tend their injuries until a friendly ship picked us up. We were also responsible for Apollo space craft recovery.

After Guam, I volunteered for Vietnam. In Vietnam, the pararescuemen were part of an elaborate team of helicopters, fighter planes, HC-130s, and spotter aircraft. If the pilots were injured or killed—no one was left behind—the PJ would be lowered from the helicopter to help or recover the pilot and other crew members. Pilot and aircrew recovery could occur in Vietnam, Laos, or Cambodia. Several PJs made the ultimate sacrifice.

Bloebaum received the Distinguished Flying Cross, among other medals, for his service during the Vietnam War.

I became a VA researcher when I was hired as an associate professor in the department of orthopedics at the University of Utah. The fact that the job position was Veteran-centered with VA salary support was a big bonus and became my full-time appointment. My research has spanned more than 30 years in biomaterials, tissue compatibility of materials, implant attachment to the skeleton, bone healing and remodeling, histology, and periprosthetic infection. This work has enabled my research team to develop osseointegrated implants (OI) for direct bone attachment for Veterans with amputations.

OI technology has been a major life-changing technology that allows Veterans to be more active and liberated from the pain and inconvenience of socket suspension systems because the bone is loaded directly. This will hopefully make suspension sockets obsolete for many traumatized Veterans, warfighters, and patients with amputations. The technology has already improved the quality of life for Veterans and amputees.

I met with the first eight Veterans with above-knee amputations to receive OI technology. Being able to listen and discuss their experience in war and life, and sharing their vocabulary as a combat Veteran, was life changing for me, the Veterans, and their families.

Does being a Veteran give you a greater emotional tie to the work you’re doing or more insight into Veterans’ needs?

Being a Vietnam Veteran has enriched my experience as a research scientist. I have a clear understanding of the struggle fellow Veterans and their families experience with health care challenges. My training as a paramedic exposed me to the Army, Navy, Marine, and Air Force training cultures. I can assure you they are different. I used to joke that I was quadralingual. This has helped to enrich me, as well as the Veteran patient.

Based on your life experiences to date, what do you believe are the keys to success? What motivational tips would you share?

My keys to success have been family—my parents, wife, children, and relatives—and my military experience, great mentors, and basic philosophies, which go like this: Whatever you volunteer for, be the best at it. That includes excelling at work. Also, never do the minimum and always try to exceed expectations.

Read Dr. Bloebaum’s full interview and interviews with other Researchers Who Served.