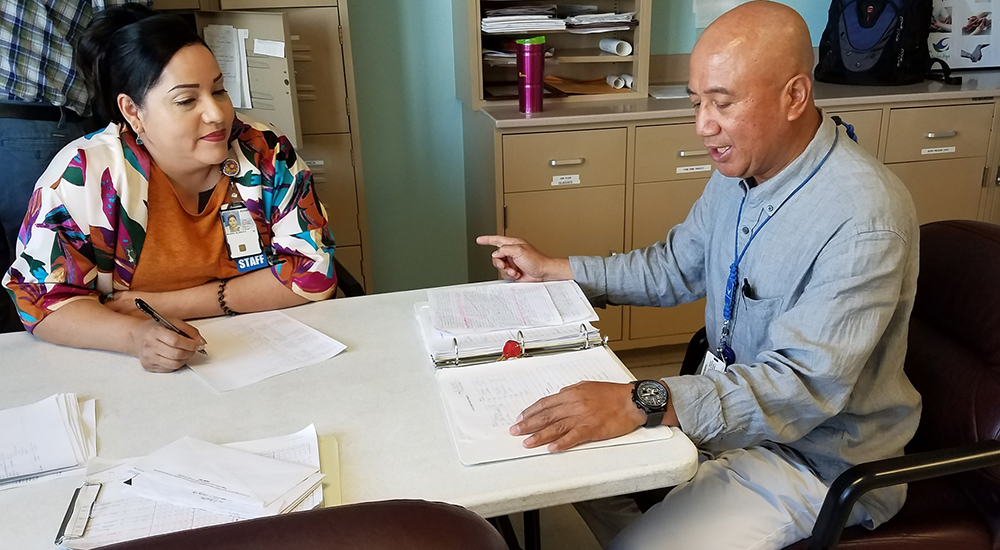 VA has an exceptionally talented team of outstanding employees. We would like you to meet them, continuing this week with our dedicated staff of nurses. We will introduce our remarkable nurses in a continuing feature: VA’s Top Nurses.

Nurse of the Year is former bomber navigator

Sitting quietly, he listened as the Veteran cried, screamed and vented.

The young man, who had served in Southwest Asia Post 9/11 and suffered from Traumatic Brain Injury and Post Traumatic Stress Disorder, was highly upset, wouldn’t engage, angry at the world and miserable with life. Accompanied by his parents, he had admitted himself into the VA hospital near suicidal. But no one at VA Central California Health Care System could connect with him.

No one except Manuel Martin.

The retired Air Force major and registered nurse just listened. He listened and he created a protected space. This allowed the Veteran to share and explore his feelings without judging him or limiting him. And he made a connection. From there, Martin was able to inject his compassion and understanding, his empathy and experiences and his fears and faith.

At discharge, that same Veteran stopped by the nurse manager’s office, with a tear in his eye, to tell her about his interactions with Martin.

Nurse Martin sat with the Veteran while he cried. He listened to him while he was upset and shouting. And he hugged him when he was leaving, said Diane Palacio, nurse manager.

“Just watching him with that Veteran made me cry too,” she said.

Martin was recently selected as the Fresno VA Nurse of Year.

“He is detail oriented, compassionate about his work and he loves Veterans,” said Palacio. “He’s the nurse you want at your loved one’s bedside. He clearly demonstrates the criteria of Nurse of the Year.”

“It’s a great honor to be recognized because my job entails helping fellow Veterans,” said Martin, who served 24 years in the Air Force, much of that time as a navigator on bombers, tankers and cargo planes.

“I’m grateful to my superb nurse manager for nominating and trusting me. Giving care to my fellow Veterans has been very satisfying and fulfilling,” said Martin, who has worked for the VA for nearly seven years. “I feel fortunate and honored to be in a position where I can assist Veterans every day.”

To go from a career in the Air Force as a navigator, to starting over and becoming a nurse, to now being selected as Nurse of Year – “it’s a blessing,” said Martin, who has been married for 35 years and has two daughters, one son and one granddaughter.

Manuel Martin and his wife and two daughters are all nurses and his son is a speech pathologist.

And as to why he decided to become a nurse at age 48, “My daughters and I decided together to follow my wife and we all became nurses,” he said with a smile.

But the California State University Bakersfield graduate knew earlier on that this would be his calling.

While deployed as the assistant deputy commander for operations in Kenya for Operation Restore Hope, Martin planned the medical evacuation of a severely injured Marine from Mogadishu, Somalia.

“The joy I felt when I was told the marine was saved because he was quickly evacuated to a hospital inspired me to pursue a career in the medical field after I retired from the Air Force,” said Martin. “I also knew in my heart then that it would be in the VA where I would like to work … to care for fellow Veterans.”