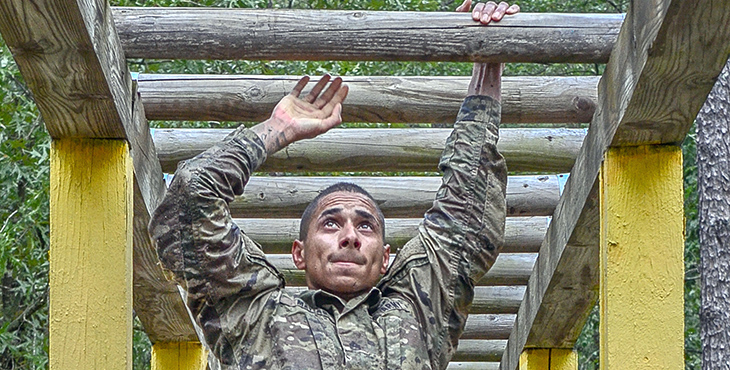 Above: Army Staff Sgt. Miguel Matias, with the 82nd Airborne Division, navigates an obstacle at Fort Bragg in July 2018. A new effort will merge VA data into the military-funded Millennium Cohort Study, for a more complete picture of service members’ and Veterans’ health outcomes over time. (Army photo by Spc. John Lytle)

Nearly two decades ago, the Department of Defense launched a groundbreaking survey to evaluate the long-term health impacts of military deployments on members of the armed forces. The Millennium Cohort Study has since tracked the health of more than 200,000 service members through a self-administered survey and DoD health records.

From the start, VA and DoD researchers collaborated on the design of the Millennium Cohort Study (MCS), with VA officially designating it a study under its Cooperative Studies Program. The researchers also aimed to incorporate VA data into the study. Doing so, they believed, would strengthen the database and lead to better health outcomes for both service members and Veterans.

That time has arrived.

Sometime in the coming months, VA and DoD officials will sign a deal calling for VA data on health outcomes and disabilities, among other information, to be merged with data collected in the Millennium Cohort Study and the related Millennium Cohort Family Study. The family study tracks the health of spouses of service members and Veterans, including some spouses who have served in the military.

This rich bank of data will be housed at the Naval Health Research Center in San Diego, which is the DoD entity that runs the MCS. VA investigators will be able to access the data via the VA Cooperative Studies Program.

Dr. Edward Boyko, an epidemiologist and VA’s chair on the Millennium Cohort Study, says the goal of the merger is twofold: to help VA and DoD researchers and clinicians learn the most effective ways to protect service members from long-term health problems, and to make the researchers and clinicians more aware of the ties between military experiences and long-term health outcomes.