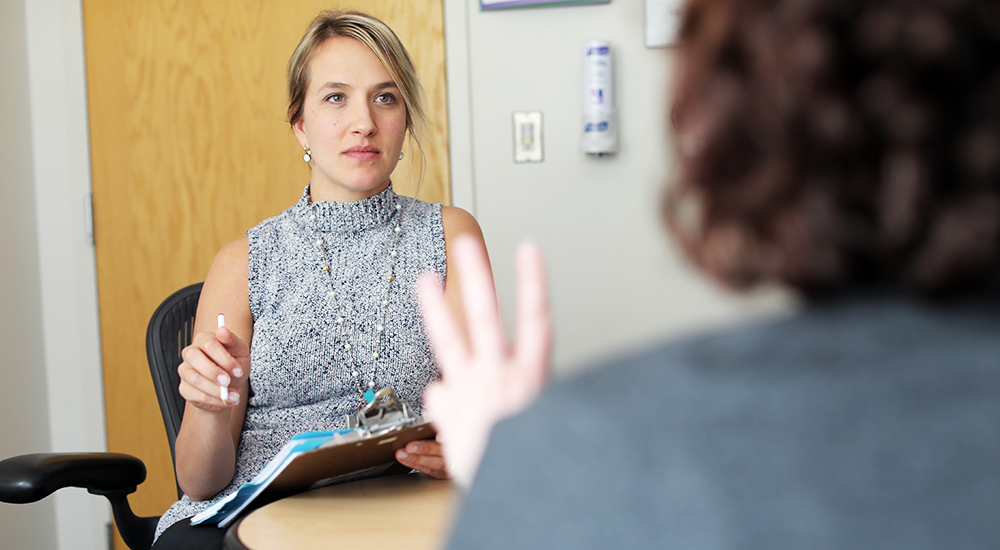 (This story contains a graphic personal account of sexual trauma. The name of the survivor has been abbreviated to respect her privacy. Dr. Nicole Anders (pictured above), Military Sexual Trauma counselor at the VA Southern Nevada Healthcare System, is her counselor.)

When K. H. walked into the VA Southern Nevada Medical Center in 2017, she decided she was finally going to seek counseling. After seeing a poster for survivors of military sexual trauma, K.H. realized it was time. “I decided to speak out and get the help I felt I so desperately needed.”

“I blamed myself for all of the abuse my whole life.”

Now 56 years old, K.H. has suffered through a lifetime of abuse from family, friends, and fellow servicemembers. “I was the baby of six kids,” she said, “and my father was a pedophile since I can remember.” This abuse was the first of several instances of sexual trauma that K.H. would endure in her lifetime.

In order to improve her self-esteem, K.H. wanted to find a career that she could be proud of. “I joined the military right after high school,” she said, “I wanted to prove to myself I was worthy of the respect I gave to the military men and women. K.H. graduated from her training at Fort Sill, Okla. to become a field artillery radar operator, and was first stationed in Hanau, Germany.

“That is where my life was changed forever,” K.H. said. She had met several new friends, including a few officers, despite being a junior-enlisted soldier herself. One of those friends was a second lieutenant. “We got to be good friends and she invited me to a party with the officers,” K.H. said. “I had no reason not to just trust her as we went on vacations together with other officers.”

While at the party, K.H. had a few drinks and blacked out. That was when she was attacked by an unknown man. “The next thing I know, I was coming to and being sodomized. I tried to stop him, and his response was a slap on my buttocks telling me he was done anyway.” K.H. is unsure of whether or not she was drugged but remembers that she didn’t drink very much. After regaining consciousness, she realized the extent of her injuries. “I woke up with blood all over my face, I was told I fell downstairs, yet received no other injuries except my bloody face and the sexual assault.”

“Somehow, I must have deserved it.”

Scared, K.H. hoped to find comfort from a friend. “When I told the lieutenant what had happened, she said ‘Please do not say anything, I could lose my rank, and it would be your word against an officer.’ So I said nothing.” K.H. blamed herself for going to a party with officers.” “I blamed myself for all of the abuse my whole life,” she said. “And this just confirmed the fact that I deserved everything I ever got. Somehow I must have deserved it.”

K.H. would experience another sexual assault during her military career. A man at a party raped her, despite her telling him no.  She did not report either incident, for fear of reprisal. “Again I suffered in peace. My pedestal I had put the military and officers on came crashing down. My father stole my childhood and the military tore me to my most inner core.”

K.H. stayed in the active reserves for eight years. Throughout her service, she did not want to seek professional help but would turn to other methods to help her cope with the pain and avoid men. “I would rip off my toes nails just so I wouldn’t have to run in front of the men in a T-shirt,” she said. “I drank often to try to forget. I even overdosed on alcohol.” Her mental health issues continued after her time of service ended. “I am filled with anxiety and depression. I was angry all the time. I don’t trust. I turned to alcohol and drugs,” she said.

Finally, K.H. decided to seek counseling from the VA. “I have used the VA off and on for years. It was only about 18 months ago I decided I really need and wanted help,” she said. “I saw a poster when I went to get medication for my depression and decided to speak out and get the help I fell I so desperately needed.”

“The rewards outweigh the fear.”

K.H. began her counseling program with Dr. Nicole Anders (picture above) and the Military Sexual Trauma counselors at the VA Southern Nevada Healthcare System. “The MST program was very hard,” she said. “But the rewards outweigh the fear and anxiety of starting the program. I felt very comfortable with Doctor Anders and her intern, Amber Hassan.”

“When she first came in, she was incredibly traumatized,” said Anders, a clinical psychologist who oversees VASNHS’ MST program. “She had full-blown PTSD symptoms, a lot of avoidance, and self-injurious behavior. We added her into the program, and she was hesitant at first. But we started doing a lot of rapport-building and eventually brought her into the PTSD program formally.”

In time, K.H. was able to move to an MST process group therapy, led by Anders and Hassan. “The group class was as amazing as it was hard,” she said. “To see other women and hear their stories made me feel like ‘Wow, I am not the only one.’ The tools I learned, and I’m still learning to use, have made my life livable. Never did I feel judged or blamed for what happened to me.”

Next, K.H. participated in cognitive processing therapy, a 12-week psychotherapy program, and by the end of it, she made several huge changes in her life. “She has made great improvements in socializing and relationships and her anxiety had diminished,” said Anders. “She was an ideal patient, and the team really has been proud of her progress.”

“Letting go of the guilt and shame was a huge turning point.”

Between the group therapy and one-on-one counseling, K.H. is beginning to see some improvements in her mental health. “I finally believe none of these traumatic experiences are my fault,” she said. “Letting go of the guilt and shame was a huge turning point for my recovery. I won’t lie, it will never be gone, but I stand a better chance with all the tools I have learned in the MST/PTSD program.”

One in five women and one in 100 men have experienced military sexual trauma. The VA Southern Nevada Healthcare System offers a variety of services to assist Veterans who have experienced MST. Treatment for all mental and physical health conditions related to MST is free, and you may be eligible to receive free MST care even if you are not eligible for other VA care.

K.H. recommends this program to any Veterans who have suffered through MST in silence.

“I know it’s hard to talk about,” she said. “But with the awesome program offered by the VA, I pray anyone who is suffering comes to get the help that is offered from this program. It really does help. I can honestly say I don’t know how I managed this long, or where I would be if I hadn’t found this program with such great staff who really wanted to help me in my recovery.”